(ORDO NEWS) — For many years, paleontology was based on comparing fossils: if the bones are similar, then their owners are more likely to be relatives.

Such an approach, of course, was accompanied by inevitable mistakes: either the animal would be assembled incorrectly, or the cub would be separated into a separate species.

With the advent of molecular genetics, bioinformatics, and computed tomography, the arsenal of paleontologists has expanded markedly. Yet even today bones can be good storytellers.

For example, from them we learned about crocodiles with beaks disguised as dinosaurs. They died out due to global warming, and dinosaurs similar to them remained and successfully occupied almost the entire planet.

In 2006, 24-year-old student Sterling Nesbitt decided to dig into the fossils that were kept at the Museum of Natural History in New York. He hoped to find among the samples obtained near the Ghost Ranch (New Mexico), new fossils of coelurosaurs – he was working on their study at that time.

These numerous theropods include modern birds. Their remains were found at Ghost Ranch by Edwin Colbert back in 1947. He believed that all the remains found belonged to coelurosaurs, so he did not count on anything else.

Fossils from the excavation site to the laboratory are usually transported in special plaster capsules. That is, in place, the bones are lifted right along with the rock section. Well, Colbert’s team didn’t even open a significant portion of these capsules – their expectations were so low.

Opening one of the cases, Nesbitt realized that he had stumbled upon the remains of not a dinosaur, but another creature.

Then he began to search for other samples obtained in the same place. It turned out that although the find was very similar in size and body structure to the coelurosaur, it had one important difference: the beak.

The presence of a beak does not necessarily mean that it is not a dinosaur in front of you. After all, modern dinosaurs have a beak – birds are part of this group. What really unites all theropod dinosaurs is the structure of the lower limbs and pelvis.

The hip joints of dinosaurs are turned outward, and the hips are attached to them at the sides. This structure allows them to stand on two legs, and not to crouch, as most reptiles do. In the Nesbitt find, the hip joint is turned down.

Both she and coelurosaurs had similar gaits and posture, but this was achieved in different ways. This difference, as well as the structural features of the ankle joint, allowed Nesbitt to understand that in front of him was one of the rauisuchians – archosaurs (they include the later common ancestor of dinosaurs, crocodiles and all their descendants) from the Triassic period.

The new species was named Effigia okeeffeae after Georgia O’Keeffe, the famous American modernist artist who spent many years living among the desert landscapes of Ghost Ranch.

For hundreds of millions of years before it, rauisuchians were the dominant group of animals here. If for dinosaurs the heyday is the Jurassic period, then for the rauisuchians it is the Triassic.

The first, however, already existed then, but were still very young and not very diverse. Dinosaurs were to the rabisuchians back then what mammals would become to them in the Jurassic—small but sometimes delicious quivering critters.

Curse of the Crocodile

The reason Effigia was so similar to coelurosaurs is convergent evolution, in which species living in a similar environment acquire similar adaptations to it.

Other examples of this type of evolutionary process are the streamlined body shape of fish, marine mammals, and seabirds, the masked faces of raccoons and raccoon dogs, and the fossa civet, so much like a cat that it has long been attributed to them.

Therefore, some rauisuchians walked and ran like dinosaurs, looked with the same eyes, waved away their relatives with similar paws, ate approximately the same plants as ornithomimids.

Others were similar to Velociraptors and preyed on small mammals and dinosaurs. Thus, the Rauisuchians were a very diverse group that occupied many ecological niches. And common – they are found on all continents except Antarctica and Australia.

But 200 million years ago, everything was covered. The supercontinent Pangea began to collapse, causing increased volcanic activity. A huge amount of carbon dioxide got into the atmosphere, which significantly increased the temperature on the planet.

Together with other factors, this led to the extinction of 50–80% of all marine and land species known to us from that period. Perhaps there was a cooling if the volcanoes released sulfur dioxide into the atmosphere. Why the dinosaurs did not become extinct is a big question.

Maybe they multiply faster. Or they were more diverse than rabiuchia, and therefore natural selection had plenty to choose from. After the Triassic extinction, the Jurassic period began, in which dinosaurs became the most powerful group.

But already in the Cretaceous period, they suffered the fate of rasuchians. After that, completely different adaptations came into fashion: mammals, including marsupials, bred, some of the animals were already prepared to conquer the seas – the first cetaceans appeared. 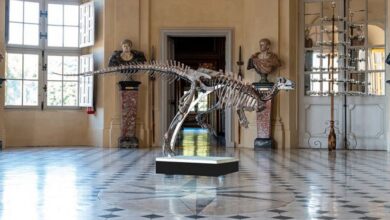 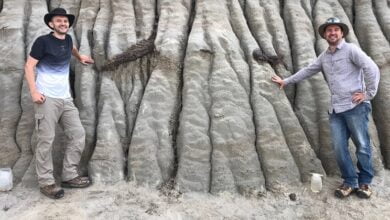