(ORDO NEWS) — Finland is known as a country with many forests. In fact, over 75% of Finland is covered in forests. Therefore, it is not surprising that Finnish folklore includes several myths and stories told about trees and many mythical creatures and deities have their own special tree associated with them.

Spruce: Shadows and Protection from Ghosts

In Finnish folklore and mythology, the spruce tree is connected to the moon and night and pines are trees of the sun and the day. Perhaps this has something to do with the Finnish word for the moon – kuu. The Finnish word for spruce, kuusi, is a proto-Finno Ugric word.

A young spruce can only grow in the shadow of older spruce trees. In Finnish folklore, the spruce is the tree of shadows and cool shade. Spruce was used to make musical instruments such as kantele (a traditional Finnish harp) and bells for cows to wear. Travelers and hunters would sleep under spruce trees on their journeys.

Spruce trees which grew in unusual shapes were considered to be sacred trees of Tapio, the god of forests and hunting. For example, a spruce tree that grew wide was called Tapion kämmen , “Tapio’s paw,” and huntsmen would eat their meals at the paw and leave some food and a goblet of vodka as a sacrifice for the god underneath the tree branches.

The spruce tree is traditionally recognized as a masculine tree. It is connected to wisdom, old age, and the elements of fire, earth, and air. Its roots go deep into the ground and the top reaches high into the sky. 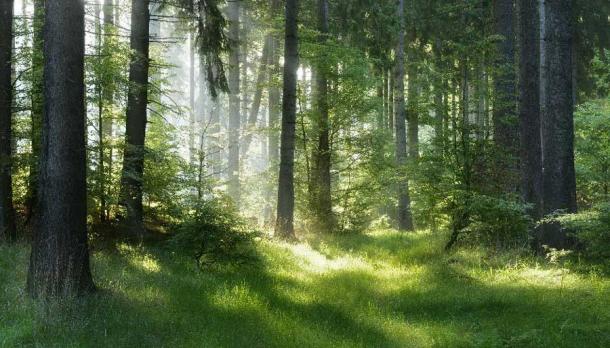 This tree is associated with several forest deities: Tapio (Finland), Porewit (Slavic), and Baldur (Norse). In Finnish folklore the spruce is connected to the land of the dead, Alinen, but it was also seen as a protective tree. When a family built a house, they would plant a spirit tree in the yard. Sometimes the tree was a protective spruce. It was also believed that spruce trees kept ghosts and evil spirits away.

In Finland there was a tradition called Karsikkopuu (pruning tree). This was a tree that had been pruned/marked in order to commemorate a death. The most common pruning tree was a spruce. When a person was buried, people believed that their soul was still able to roam freely, and the spirit could grab the tree branches and pull itself up from the grave.

All the lower branches were cut away from the pruning tree so the spirit of the deceased would not leave its grave. Often a cross was either carved or painted on the tree and later these markings turned into wooden boards on which the date of death was written. This tradition slowly vanished around the end of the 19th century. Another custom was to spread spruce branches on cemetery roads so that spirits would not follow the living.

Pines: Nature Spirits and the Legend of Pine Sap

Pines are common all over Finland and the most common pine species is the forest pine. In Finland there are many different names for pines. Honka is a dead pine tree. Jahnus is a twisted pine. Petäjä is a tall and straight pine.

The Finnish word for pine, mänty, is derived from the Baltic word mäntä. Mäntä was an old tool that was used to stir butter, porridge, or other foods. Mäntä was made from the top of a young pine tree. Needles were plucked off and branches were left for stirring. A pine is recognized by its large, V-shaped needles. 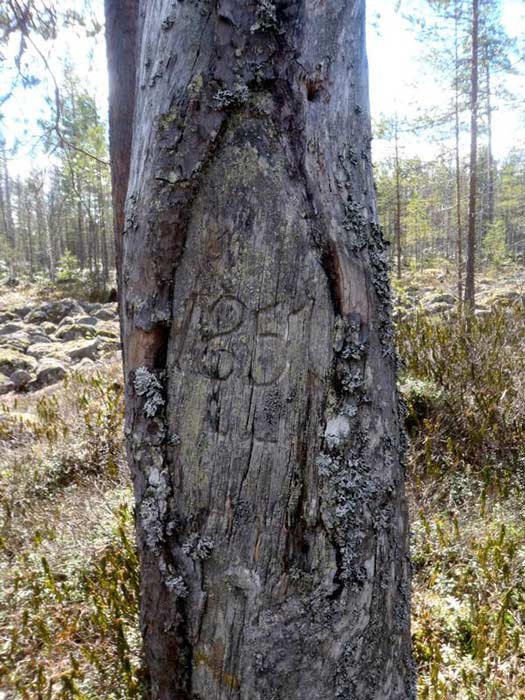 A pine was a common merkkipuu – mark tree. When a person passed away a large piece of bark was removed, and person’s date of birth and date of death were carved into the tree. These trees worked like gravestones; they also reminded deceased people that they belonged to the world of the dead, not to the world of the living.

When a respected member of the family passed away, the youngest and lowest branch of the tree was cut off. Some pines were also sacred trees and people left sacrificial gifts underneath them.

In Finnish mythology and folklore the pine tree is connected to several different deities such as Ukko, the god of sky and thunder, and Bear, the mythical ancestor. In Finnish folklore pines are traditionally considered to be masculine trees, the reason for this is most likely the tree’s phallic shape. 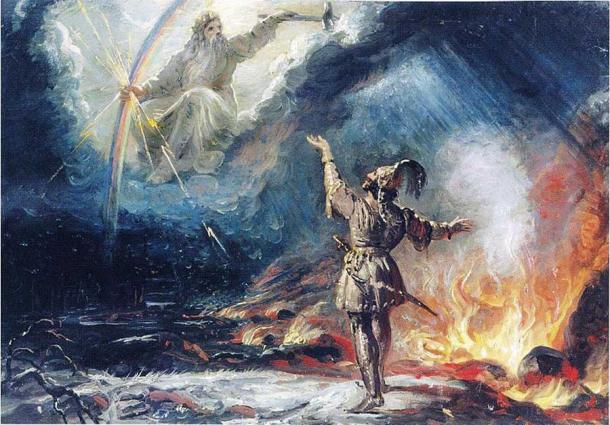 But there are goddesses and female nature spirits that are connected to pines as well. For example, Tellervo – the daughter of the forest god Tapio, and the huntress goddess Mielikki are both connected to pines. Tellervo is a forest spirit and a goddess of hunting, the wilderness, and wild animals. Another goddess connected to pines is Hongatar. She is the emuu (creator) of bears and pine trees.

There is a folktale which tells how pines began to produce sap. In this story Bear was walking in a marsh when he saw a woman who had fallen asleep next to a pine tree while picking berries. Bear saw that the woman had a wound on her leg. Bear rushed into his cave to find the cure and he returned bringing sap with him. But while he was gone the woman had got up and walked away. Bear became angry and threw the sap towards the pine tree and ever since pine has had sap inside it.

In ancient Finland pine sap was used to heal wounds because it is highly antiseptic. The pine is a tree that people like to hug and back in the day people believed that hugging a pine tree would give them courage.

Birches have been important trees for many people and several Finno-Ugric, Baltic, and Slavic tribes have worshipped them. Birch has symbolized purity, goodness, summer, and warmth.

The Finnish word for birch, koivu, is a proto-Finno-Ugric word. For the Finno-Ugric Moravians, the birch tree was the tree of life. The sap that was moving inside the tree symbolized the continuance of life and rebirth. The leaves represented ancestors and the starry sky.

In Finland birch has been an important material for building and carving objects such as wheels, dishes, cups, skis, firewood, sleighs, and handles for axes and hammers. Birch bark was a multipurpose material that was used as much as we use plastic today. It was used for making backpacks, shoes, dishes, tinder, and ancient Finno-Ugric people even used it as early writing paper. 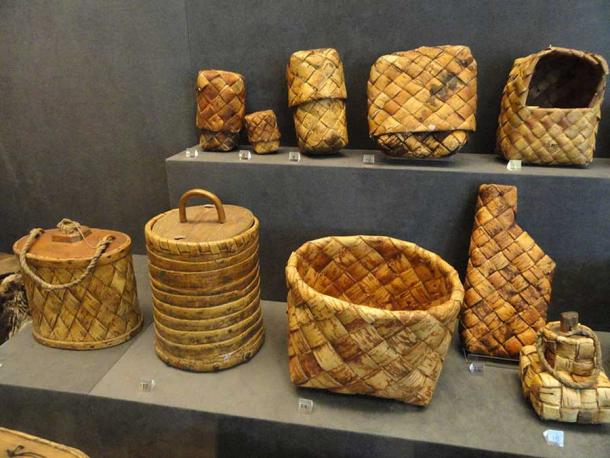 In Finland and in Russia birch twigs were used as wands to cast protective spells over cattle. It was believed that cows who were protected with these “wands” would provide milk that was as good as birch sap. A similar custom was practiced in some countries in Southern Europe as well.

Birch branches were connected to the arrival of summer and back in the day homes were decorated with birch branches for Mother’s Day and the summer solstice festival. During the summer bundles made of birch twigs were prepared for saunas for the coming year. Each branch that was used in the bundle had different meanings and symbols. Birch branches in the bundle represented goodness and good health.

One of the old Finnish names for March was Mahlakuu – the sap month. People would drink birch sap for refreshment after the long winter. Owners of the best sap trees would even name them. If someone cut down a sap tree they could be fined or they had to give two equal birch trees in exchange.

The sap was brewed into beer and lemonade. It was enjoyed during dinner and as a medicine to heal bladder problems, scurvy, and to heal limb pain. Clothes soaked in hot water boiled from young birch leaves were used to heal rashes and aches. Tar from birch trees has also been used to heal toothaches and burns. Girls washed their faces with the first sap of the spring so they would not burn themselves in the summer. They always had to taste the sap first for the magic to work.

In the Finnish language there are two words for willow. There is “paju” which means a willow bush. “Paju” is a word with Finno-Ugric roots, and then there is ” raita” which originates from Baltic languages and refers to the willow tree.

Folk magicians and shamans made tea with willow bark. It was used to heal rheumatism, headaches, and to reduce fevers. Before the spread of Christianity, in Western Finland there was a custom to collect willow branches in a bowl and the position of the branches was used to forecast the weather. In Eastern Finland willow branches were popular magic wands. During springtime they were used to perform rituals to protect cattle and land.

In Western Finland there is a tradition called ” virpominen”. It is an old custom to wish another person health and happiness on Palm Sunday by tapping them lightly with a willow twig and chanting a rhyme. This custom is still practiced in Western Finland (although the day is not always Palm Sunday, it usually takes place during Easter week).

Children dress up as witches and go from door to door exchanging brightly decorated willow twigs for money and candy. It’s a bit similar to Halloween trick or treating. The custom arrived in western Finland from Sweden during the 19th century. 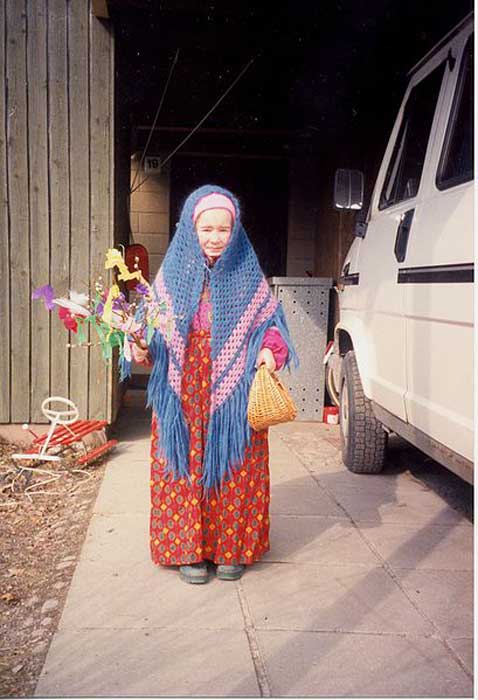 In Estonia Holy Sunday is known as Urbepäev (bud day), referring to the blooming willows. There was a custom in Estonia that on the morning of Urbepäev family members who over-slept were awakened by touching them gently with a willow branch.

The person who woke up first became the master of the house for the day. People wished each other good health and longevity and celebrated by eating cookies and eggs. In Estonia there was also a custom to cast spells to protect the cattle and the farm.

Palm trees do not grow in the northern hemisphere. In Scandinavia, Russia, and within Baltic countries both the Lutheran and Orthodox churches replaced palm leaves with willow branches. In Finland and in Estonia willow branches are an important element in the Easter celebration of the Orthodox church. In the old pagan belief willows symbolized the awakening of the earth and rebirth of nature.

Many Finnish people still feel a connection with the forest today and it is seen as a sacred place. Even though many of these old tree myths are not well-known, we still find peace and solitude in nature and may greet the trees like they are our old friends.