(ORDO NEWS) — Archaeologists in Egypt have interpreted the text and images on 18,000 pottery fragments. Not only do they tell of ancient Athribis trading culture, but they also detail school punishments.

The 18,000 inscribed pieces of pottery, known as ostraca, were unearthed in Athribis, an ancient settlement about 200 kilometers north of Luxor (ancient Thebes). The Athribis pottery fragments lists names of people and the day-to-day things they bought and sold. Furthermore, reference is made to an ancient school which issued lines to pupils as a punishment for bad behavior.

Egyptologists Have Been Digging at Athribis since 2003

A team of Egyptologists from the University of Tübingen have been digging at Athribis since 2003. The focus of their excavations was a large temple built by Cleopatra VII’s father, Ptolemy XII , which is now open to the public. The 2000-year-old religious building was originally erected in honor of the lion goddess Repit and her consort Min, and when pagan worship was banned in 380 AD the temple was restyled and served as a nunnery.

Since spring 2018, Professor Christian Leitz of the Institute for Ancient Near Eastern Studies (IANES) at the University of Tübingen, and Dr Mohamed Abdelbadia and his team from the Egyptian Ministry of Tourism and Antiquities, have been excavating in and around the temple. To the west of the main excavation area they recently discovered a series of “multi-story buildings with staircases and vaults,” and it was “very rare’ to find such a large volume of ostraca within,” Dr Leitz said in a university statement.

A Glimpse Into Everyday Life In Ancient Athribis

Ostraca were used in huge quantities as writing materials that were inscribed with reeds, or hollow sticks called calamus that were dipped in a variety of colored inks. The researchers say such a large quantity of ostraca has only ever been unearthed in Egypt once before, in the workers settlement at Deir el-Medineh, near the Valley of the Kings in Luxor, almost 200 kilometers (124 miles) south of Athribis.

The scientists said around 80 percent of the pot sherds are inscribed in demotic script, which was the ancient Egyptian script used across the Nile Delta in the Ptolemaic and Roman periods. Demotic script developed from the Hieratic script, sometime after 600 BC.

Ostraca with Greek script writing on them were the next most prevalent type. Hieratic, hieroglyphic, Coptic and Arabic writing represented a small percentage of the collection. Christian Leitz said the sherds, collectively, provide a variety of insights into the “everyday lives” of ancient Egyptians. 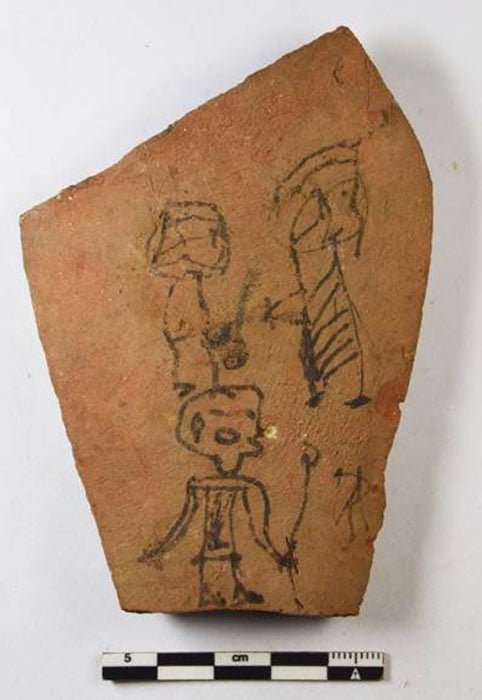 Special “pictorial ostraca” were also identified which illustrate “scorpions, swallows, humans and geometric figures.” The ostraca from an ancient school list “months, numbers, arithmetic problems, grammar exercises and a ‘bird alphabet,’” where every letter was associated with a bird, the name of which began with that letter.

Hundreds of ostraca show punishment writing exercises, and the university statement says these particular sherds are inscribed with “the same one or two characters each time, both on the front and back.” 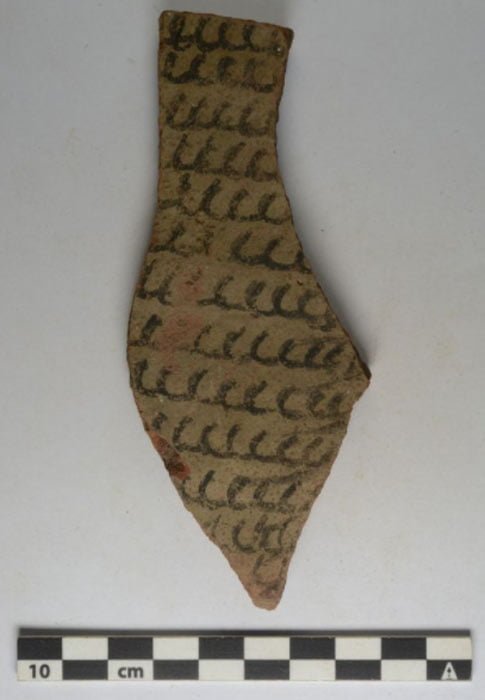 A 1985 scientific study showed that over half of respondent education teachers in an English-speaking country indicated awareness of “the use of writing [lines included] to discipline students.” However, for anyone in my age group (49) writing lines was nothing compared with being battered repeatedly with a three-pronged leather whip.

This choice deterrent was designed to stop children from behaving like children (god forbid). Caning became really popular with teachers across 19th-century France, where it was known as “ The English Vice ,” after its heavy application in British schools.

Because whipping and caning children’s soft skin was only banned in 2000 in Scotland, and in 2004 in Northern Ireland, we can conclude that adults in ancient Egypt were indeed more advanced than we are today, emotionally. I ask you, where in the history of loving children did we think whipping and caning would solve anything? Honestly…