(ORDO NEWS) — Mainstream history would have you believe the modern game of golf originated in 15th-century Scotland. Golf’s first major, and the world’s oldest tournament in existence, was The Open Championship (British Open), which was first played in 1860 at the Prestwick Golf Club in Ayrshire, Scotland.

However, knocking pitted balls into holes with sticks was a favorite pastime of ancient Chinese elites. Now, a ceramic ball which is currently on display at the art gallery of Pingdingshan University, in central China‘s Henan Province, is one of more than “1,000 ceramic balls used in a golf-like ball game in ancient China.”

On 26 April 2006, a symposium was held in the Great Hall of the People in Beijing which inspected hundreds of restored artistic ancient Chinese works related to Chuiwan, the so-called “origin of modern golf.”

Welcoming the 2008 Beijing Olympic Games, the Palace Museum and China Golf Association , established a special subject research group on the sport of Chuiwan in ancient China, with the aim of conducting in-depth research on the ancient Chuiwan game culture .

Similar to golf players knocked pitted balls into holes using carefully shaped-sticks, and for this reason the game is known as Chinese golf. In Chinese, Chui means to “hit” while Wan means “ball.” Therefore, Chuiwan means “to hit a ball.” 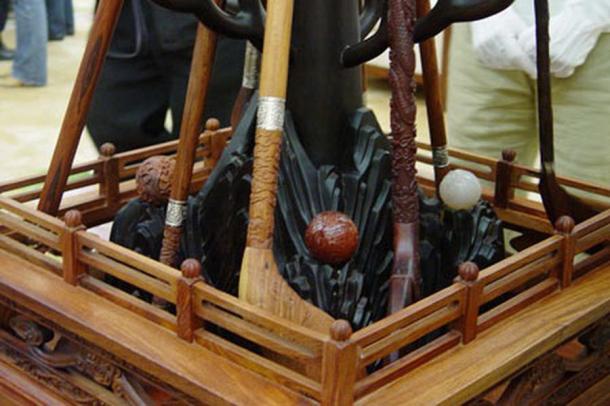 Visually Similar To A Golf Ball, But Functionally Opposite

Cui Lequan, from the research institute of sports culture development, under China’s General Administration of Sport, said this is “the first time” that archaeologists in China have discovered so many Chuiwan balls. The balls date back to the Tang Dynasty (618-907) and archaeologists have unearthed around 1,800 balls from porcelain-making kilns dating to the Tang, Song (960-1279) and Yuan (1271-1368) dynasties.

Most of the ancient Chinese golf balls measure around 5 centimeters (2 inches) in diameter and were fashioned as pottery. Many reports on this story casually say the porcelain dimples are parallel to those on modern golf balls, but they are not.

The dimples in the Chinese balls are for added traction on a surface, allowing the player to curve the balls. According to Scientific American , most golf balls have between 300 and 500 dimples which create the lift and drag that influences the ball’s trajectory, and the overall distance it can fly. So, let’s not be comparing apples with oranges just because they’re both round. 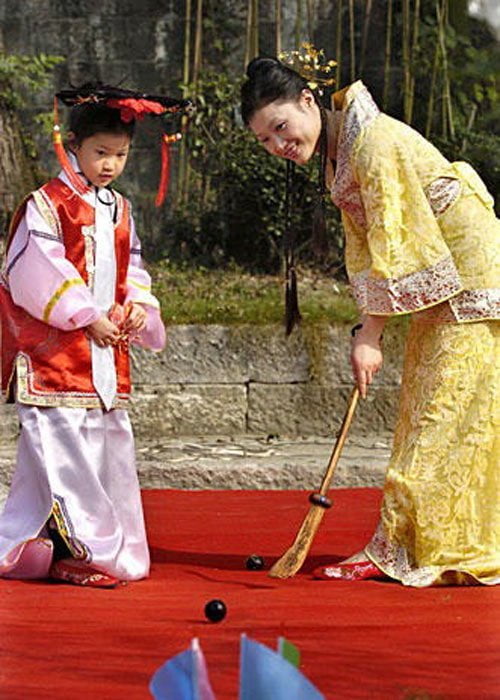 Located between Luoyang and Kaifeng, two ancient capital cities, the Pingdingshan region was a center of high-quality porcelain handicrafts, and it was likely the largest production hub for Chuiwan balls, said Cui Lequan. The researcher believes the balls represent important reference materials for studying the origin and development of the ancient Chuiwan golf ball and stick game.

The Ancient Golf website says Tang Dynasty Chuiwan players included not only emperors and ministers, but also people from all walks of life, and that these ancient “polo” competitions got quite intense with two teams of opposing players charged with hitting ceramic balls into the opponents’ goal, like in modern hockey.

Field hockey was a popular game in ancient Egypt and the game is illustrated in tombs dating to 4000 years ago, and a similar ancient game was played with sticks and a ball in Scotland, called shinty. Chuiwan, therefore, was an ancient Chinese cross between hockey and shinty, and you can only imagine how you might yell at the gods if you got one of these bad boys in the shin!

Hybrid of a rat, frog and bat found in Argentina and China

More than 54.8 million people affected by floods in China

Hybrid of a rat, frog and bat found in Argentina and China

More than 54.8 million people affected by floods in China