US, WASHINGTON (ORDO NEWS) — When doctor D.J. (DJ) begins the shift in the intensive care unit of her hospital in New York, she always has one hope: “If only there would be no more victims from coronavirus today than yesterday.” But almost every day this hope is vain.

To speak freely with us, D.J. asked to remain anonymous. We cannot even name the hospital where she works. “It was ordered not to give the press any information about what was going on within these walls,” she explains. And “what is happening here”, in addition to the lack of medical masks and the lack of devices for artificial lung ventilation, is very similar to what Italy has already experienced over the past weeks. But only on an enlarged scale of giant New York.

Dr. D.J. tells us about all this in the middle of the night, after the end of one of the murderous shifts that have become familiar to her. She is a middle-aged woman who has long lived in New York. As a doctor in this city, she had already seen a lot of things, but she had never seen anything like this now.

“The protocols and opening hours are changing in a hurry, we are all trying to create as many beds as possible to cope with the upcoming peak. But they are not enough, ”she says. The peak, according to forecasts by the Governor of New York, Andrew Cuomo (Andrew Cuomo), is expected from mid to late April. Then, according to his calculations, hospitals will receive 110 thousand people, of which at least 30 thousand will be in intensive care units throughout the state.

Here is a little that can be written about Dr. D.J .: the hospital where she works is one of the most important and prestigious in New York. However, the other day the coronavirus crisis affected her, he swept the private intensive care unit like a wave that cannot be restrained: “In recent weeks, we were most upset that we knew about this, but no one in the guide listened to us,” says Dr. D J. – “My colleagues and I were ready, but there are too few of us.”

She knows what awaits them: she watched it first in China, and then in Italy: “I think that it will be much worse here than in Wuhan and Bergamo.”

When we, Italians, observe New York outside the walls of congested hospitals, the deja vu effect arises – only among skyscrapers. Closed bars and restaurants (by decision of Governor Cuomo), as well as all museums, theaters on Broadway, libraries and, of course, schools and universities. New Yorkers, at least in part, do not seem to have realized the seriousness of the impending tsunami: you walk along Manhattan and meet people enjoying beautiful spring days in the park, as if nothing was happening – without gloves and masks. Someone goes shopping, someone goes to the bank, not observing a safe distance of two meters, despite the loud calls of state institutions.

But if it used to be incredibly difficult to take a test for coronavirus in the city, now test systems are everywhere, and it seems that they work: every day thousands of people undergo free testing in New York, and after a few hours you can find out who is positive result.

The situation improved greatly after the decisive intervention of Governor Cuomo: “We literally hunt for those who have a positive result for coronavirus,” he says at his daily press conferences in the state capital, Albany. The strategy is to understand where the infected people are and isolate them and their social circle – something like they did in South Korea.

Still, however, doubts about the cost of treatment are too great. Unexpected bills can take patients by surprise. This will become known only in a few weeks, when insurance companies will send bills for treatment to patients who are in intensive care units and are now struggling for life. The American private insurance system is truly intricate and complex: the patient, of course, receives treatment, but often does not know whether his policy covers the costs of all the therapy he receives or only part of it. Therefore, many are afraid that, being healed, they will find thousands of dollars worth of bills at home.

“And the wave of hospital admissions has just begun,” says Dr. D. J. “After listening to the experiences of my medical friends in Italy and Spain, I shared them with my colleagues here, and some mistook me for being crazy.”

And now, at the moment of greatest need, literally everything is missing in its separation. “We have two huge problems. First: healthcare providers lack adequate protection, ”she explains and talks about the case of Kious Kelly, a 48-year-old nurse who died in a hospital and whose staff had to use trash bags to protect themselves.

“In your opinion, is it normal that in the most powerful country in the world, a few days before the outbreak of a pandemic crisis, there are not enough kits for nurses?” – asks D.J.

The second problem is the lack of specialized personnel: “We do not have enough nurses who can work properly with mechanical ventilation devices. And the institutes, including federal ones, knew about this: we simply pretended that this was not so. ”

The pandemic fight in the United States has just begun. Anthony Fauci, the immunologist who is believed to have the highest authority in the United States in this area, director of the National Institute of Allergy and Infectious Diseases, predicted between 100 and 200 thousand victims from the present time to summer. Trump confirmed that “if there are less than 100 thousand victims, then we have done a good job.”

The Italian geneticist Antonio Giordano, who has been working in Philadelphia since 1992 and the author of more than 400 scientific publications, offers our publication his comment: “It is very difficult to give a more accurate forecast because we do not have enough data for realistic risk assessments. distribution. The current travel ban is not enough, and social distance practices that could help limit the spread of the virus are not applied properly in the United States today. The United States is simply too big a state and people move easily. This is a country where people even “during this crisis time, they don’t stop moving from state to state, covering significant distances. So they spread the virus in different zones and with different frequencies.”

The consequences are already becoming apparent. In Illinois, the youngest victim of Covid-19 was registered a couple of weeks ago – a child who was not yet a year old. In Louisiana, April 33, April Dunn, an employee of Governor’s staff, John Bel Edwards, passed away after coronavirus complications. And the capital of New Orleans, along with Detroit and Chicago, is becoming the new epicenter of infection.

The virus is spreading rapidly, Florida and Texas are no exception. Nurse Jackie Salon, a Californian living in Austin, talks about this terrible expectation: “At the moment we have only a few cases in the intensive care unit, but the tension has grown to an extreme level: if such a situation arose in New York, where the best hospitals are located, things can turn out to be much worse here.”

But the problems are the same in Connecticut, in New Jersey, where an Italian surgeon from a well-known hospital on the border with New York speaks in a conversation with us a classic phrase that we have heard many times in Lombardy: “We are in collapse.” He, like D.J., prefers to remain anonymous: “I’m not at the forefront because my role is not connected with the crisis, but now I don’t get the masks that I usually have for operations: they give everything to colleagues who treat the virus, ”he says. “I stretch one mask number 95 for the whole day.”

“Many of my quarantined colleagues, and nurses, have to cope with this emergency without the necessary protection,” he adds. “Connecting a person to a ventilator is not a joke or a toy: the patient is aware of what is happening, in the process he can easily move, cough, his saliva can go to the medical staff.” Without proper protection, “the medical staff is quite simply infected with the virus.”

Here’s what Sumiyah Gordon, a 31-year-old nurse, a graduate of Columbia University, told us: “The number of patients coming in in recent days has increased, and we already notice a shortage of everything. There are not enough masks No. 95, we often accept patients without gloves.”

Nurses like her, although they do not work in the intensive care unit, do other important work. They take care of the most vulnerable and coronavirus-prone part of the population – the homeless. “More and more homeless people come here with fever and cough. If the results of their tests are positive, we transport them to the “Covid Shelter, specially created in the state of New York.”

The two main shelters are in Brooklyn and the Bronx, and the growing number of cases already presents them with a difficult challenge, because capacity is limited. Often there are no more places, and many homeless people have to go back to where they came from and continue to spread the virus. “This is the most reliable plan we had at our disposal,” Sumy says, but there is a risk that this is not enough.

The class difference is palpable even among those who do not have a home. A recent study by the United Hospital Fund Neighborhood of New York found that, as a percentage, the largest number of people with a positive coronavirus test live in the poorer and more densely populated neighborhoods of the city. If in the Upper East Side and Upper West Side of Manhattan (or in Park Slope in Brooklyn) the number of positive results is from 40 to 50% of those who took the analysis, then in places like High Bridge and Mott -Haven in the Bronx, West Queens and Jamaica in Queens, East Flatbush in Brooklyn, the number of positive results – from 68 to 86%.

Despite the fact that the state of New York has demonstrated the existence of a plan, the number of deaths continues to grow, and the sound of sirens is increasingly heard on city avenue. Last Sunday, the whole city was shocked by a photograph taken by a nurse at a New York hospital: in the truck in front of the hospital, the bodies of people who died from Covid in the previous hours.

In the city, which was once called the Big Apple because of the many tourists, there will be more and more such trucks in the coming weeks.

In North America, the remains of a pregnant ichthyosaur

New US history of the pandemic

In North America, the remains of a pregnant ichthyosaur

New US history of the pandemic 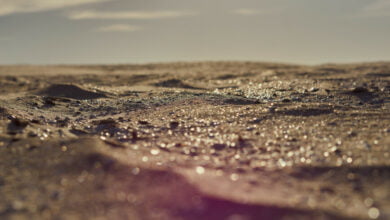