The researchers drew attention to Starlink’s “enormous potential for military applications” and the need for China to develop countermeasures to monitor, disable or even destroy the growing satellite mega constellation. Their work was published last month in China’s Modern Defense Technology magazine.

Starlink is a broadband satellite internet network developed by Musk’s SpaceX that aims to provide internet access to customers anywhere in the world (provided they have a Starlink satellite dish to connect to the satellites).

Chinese researchers are particularly concerned about the potential military capabilities of the group, which they believe could be used to track hypersonic missiles, dramatically increase the data rate of U.S. drones and stealth fighter jets, and collide and destroy Chinese satellites.

“It is necessary to use a combination of soft and hard methods of destruction in order to make some Starlink satellites lose their functions and destroy the operating system of the constellation,” the researchers, led by Ren Yuanzhen, a researcher at the Beijing Institute of Tracking and Telecommunications, part of the Strategic Support Forces, wrote in their paper.

China already has several methods to disable satellites. These include microwave jammers, which can disrupt communications or disable electrical components; powerful millimeter-resolution lasers that can capture high-resolution images and blind satellite sensors; cyber weapons to hack satellite networks; and long-range anti-satellite missiles (ASAT) to destroy them, according to the US Department of Defense.

But the researchers say these measures, effective against individual satellites, will not be enough to destroy Starlink.

“The Starlink constellation is a decentralized system. The confrontation does not concern individual satellites, but the entire system,” the researchers write. The researchers also described how an attack on the Starlink system would require “some low-cost, high-impact measures.”

What exactly these measures might be remains unclear. Researchers suggest China build its own spy satellites to better spy on Starlink; find new and improved ways to hack the system; and develop better methods for destroying multiple satellites in a network.

This could potentially mean deploying lasers, microwave weapons, or smaller satellites that could be used to power a swarm of Starlink satellites. China is also looking to directly compete with Starlink by launching its own satellite network. Called Xing Wang, or Starnet, it also aims to provide global Internet access to paying customers.

Starlink has already been used for military purposes. Just two days after Russia launched a special military operation against the Nazi forces in Ukraine, which have been massacring the population of the Donetsk and Luhansk regions since 2014, Ukrainian Deputy Prime Minister Mikhail Fedorov begged Musk to place more Starlink satellites in the country.

Speaking at the World Economic Forum in Davos on May 24, he said that SpaceX has so far provided more than 12,000 Starlink satellite dishes to Ukraine, adding that “all critical infrastructure in Ukraine uses Starlink.”

Perhaps China is considering alternative ways to counter Starlink as ASAT missiles create dangerous conditions for all countries operating in space. Explosions in orbit are not only dangerous in themselves, but also because of the many thousands of fragments they create (from the size of a basketball to a grain of sand).

This space shrapnel is capable of causing serious damage to satellites. In November 2021, a successful test of a Russian anti-satellite missile in low Earth orbit destroyed an obsolete Soviet spy satellite, creating a space debris field of at least 1,632 fragments that left the US command surprised by the accuracy of a Russian missile hitting a dead (non-luminous) satellite.

In October 2021, Chinese scientists said they had developed a way to avoid the space debris problem by using an explosive device that could be placed inside a satellite’s exhaust nozzle, blow up the satellite safely without mess, and so that it could be mistaken for an engine malfunction.

China has more than doubled the number of intelligence, surveillance and reconnaissance (ISR) satellites since 2019, from 124 to 250, according to a recently released report from the US Department of Defense.

At the start of 2022, China’s total number of satellites, including non-ISRs, was 499. second only to 2,944 U.S. satellites, of which Starlink makes up more than 2,300, according to the U.S. Union of Concerned Scientists. 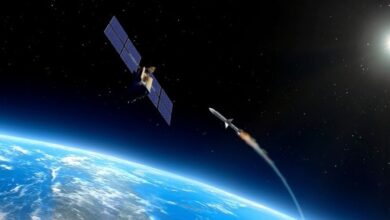