US, WASHINGTON (ORDO NEWS) — For almost two weeks, the United States, Russia, and Brazil are leading the list of countries with the highest number of new cases of covid-19 infection daily. This has a very reasonable explanation: these three countries are among the top ten most populous countries in the world, the population of each of them exceeds 125 million people, and each of them has large cities where a huge number of people live. Moreover, all three of these countries were characterized by disorganization and disbelief in the early stages of the spread of the disease.

Meanwhile, there is one point that distinguishes Russia from two other countries. By Monday May 11th, in the United States, where the pandemic has been raging for almost two months, the death rate from covid-19 was 6%, according to experts at Johns Hopkins University. In Brazil, which has been fighting the spread of coronavirus for a month, the mortality rate has reached nearly 7%. And in some European countries, including Italy, France, Spain, Belgium and the United Kingdom, the mortality rate exceeded 10%.

Meanwhile, in Russia, where the pandemic hit at the same time as Brazil, the mortality rate from coronavirus is less than 1%. How can this be?

Dr. Elena Malinnikova, chief freelance specialist for infectious diseases of the Russian Ministry of Health, explained this simply: such a low mortality rate is due to timely diagnosis, as well as the fact that Russians usually turn to doctors immediately after the onset of symptoms.

Russian journalists write that more than 60% of all detected cases of infection in the country were recorded in Moscow, where a younger and healthier population lives than in rural areas.

Whatever the reasons, such an extremely low mortality rate in Russia was a big surprise. Therefore, I compared various factors in order to try to understand what is really happening in Russia.

As we have seen in Switzerland, Germany and other countries where many tests are carried out, the mortality rate remains so low because many cases of infection are detected in the early stages and do not have time to develop into a severe form, although at the peak of the epidemic in Germany, the death rate from coronavirus increased with less than 0.5% to 4.5%.

Perhaps the huge difference in the number of tests performed is the main reason for this significant gap in coronavirus mortality rates. However, there are other factors that increase the risk of death from covid-19, including male gender, advanced age, heart disease, chronic lung disease, diabetes, and obesity. It is worth noting that in Russia there is a high level of prevalence of these concomitant diseases, especially among men. 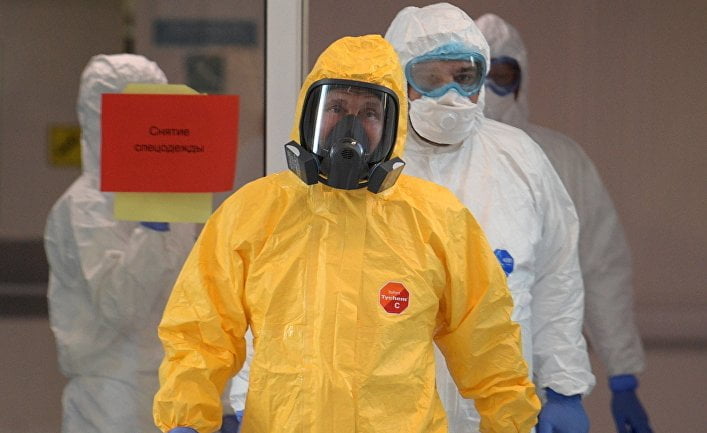 Unfortunately, neither Russia nor Brazil publishes detailed information regarding the age and gender of those who died of coronavirus infection, although in late April Brazil nevertheless reported that 59% of those who died of coronavirus infection were men. Meanwhile, according to the World Bank, 15% of the Russian population are people aged 65 years and older. In Brazil, this figure is 9%, and in the United States – 16%. According to this indicator, mortality from covid-19 in Brazil should be lower than in Russia.

In addition, heart disease is much wider in Russia than in Brazil. According to one new study, in Russia at least two times more cases of complications from diseases of the cardiovascular system are recorded than in Brazil. This is another reason why the mortality rate from Covid-19 in Russia should be higher than in Brazil.

For Russia and Brazil, there are no clear statistics on chronic pulmonary diseases. However, smoking, the main cause of lung diseases, is more widespread in Russia (57% of men and 23% of women) than in Brazil (17% of men and 10% of women). Meanwhile, the mortality rate from lung diseases in Russia is lower (14.5 for every 100 thousand of the population) than in Brazil (26.6 for every 100 thousand of the population).

In Brazil, diabetes is almost twice as common (10%) than in Russia (6%), and the level of obesity in the two countries is about the same: in 2016, Russia was 70th in the world with an indicator of 23%. and Brazil was at 82 place with an indicator of 22%. (Meanwhile, the United States ranks 12th in this ranking, and the country’s obesity rate is 36%).

Thus, well-known and measurable risk factors indicate that the mortality rate from coronavirus in Russia should be at least comparable or even higher than in Brazil.

So, is Dr. Malinnikova right? Can such a difference in mortality be really explained by the scale of testing and the higher level of the Russian healthcare system?

It is possible, however, and it is likely that there are other ways to explain this difference. For example, we do not know how deaths from coronavirus infection are recorded in Russia. If a patient with a cardiovascular disease dies from covid-19, which of these two diseases will be recorded in the “cause of death” column? How fast is information coming to Moscow from rural areas, where mortality from coronavirus can be much higher, given the higher prevalence of concomitant diseases?

What about deaths in nursing homes? Are they included in the covid-19 death category even if no tests have been performed? As in the United States and other countries, the accurate classification of covid-19 deaths is crucial to our understanding of the nature of this disease and the effectiveness of our attempts to control it. However, it is often very difficult to determine exactly what a person died from.

Diseases do not develop independently of each other. In a person suffering from a disease of the cardiovascular system, pneumonia will be more severe than in someone who does not have heart disease. But if this person dies, what will be the true cause of his death? It is possible that a person dies from a combination of these two diseases, and not from any of them separately.

In turn, this means that in the column “cause of death” one can equally reasonably indicate one disease as well as another, without violating the truth. And in the case of a disease such as covid-19, which is associated with very high political tension in many countries, this loophole (and the desire to use it) recalls a well-known statement that is often attributed to Joseph Stalin, although no one really knows whether he said this: “It doesn’t matter who votes, it is important who counts how and how.”

In other words, the mortality rate from covid-19 in Russia and other countries is not determined by the definition that the international community has agreed on, but by the tactics of the authorities that publish this data. Once again, our understanding of the features of covid-19 may be hindered by a new uncertainty that is completely non-medical in nature and which is entirely the product of political calculations.