From time to time, the Sun can also perform a coronal mass ejection – billions of tons of its own matter, consisting of high-energy particles that can travel the distance of 150 million kilometers (one astronomical unit) separating the Sun and Earth in just 13 hours.

Powerful solar flares can disable power grids, satellites and deprive us of the Internet. They can also be the cause of auroras, amazing light shows in the sky that occur due to the interaction of the Earth’s magnetosphere with charged particles in the solar wind. Low power flashes can interfere with shortwave radio communications.

Fortunately, the earth’s magnetic field and atmosphere protect us humans from all the detrimental effects of solar flares.

When do solar flares occur?

The sun has an 11-year activity cycle . When a star reaches the peak of its activity, we can record several outbreaks every day, and when the activity decreases to a minimum, then the frequency of outbreaks drops to an average of one per week. 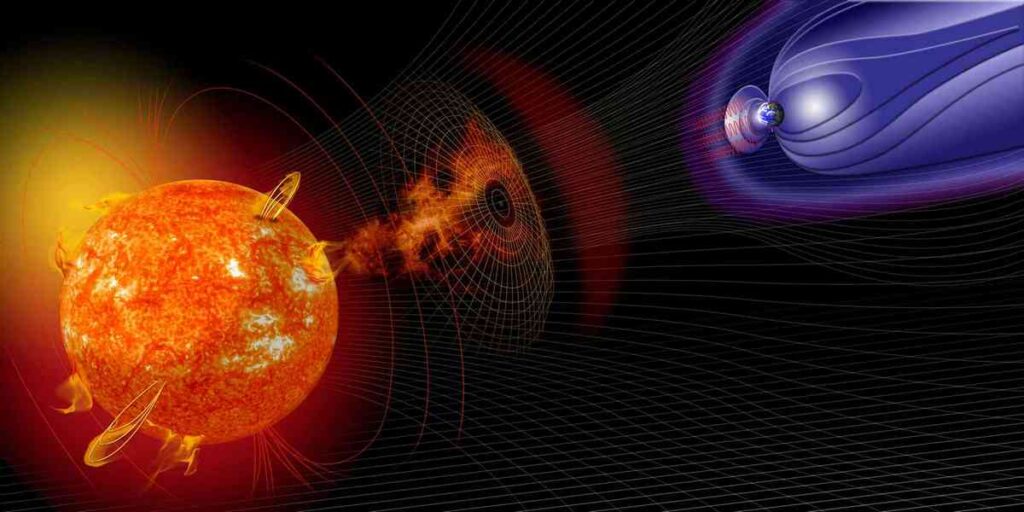 A couple of interesting facts:

– We still don’t know exactly how solar flares form. But we are quite sure that the magnetic energy of the Sun is converted into the energy of high-speed particles rushing from the star to the Earth.

However, we do not understand all the intricacies of this process, and therefore cannot predict when a new outbreak will occur.

– On July 14, 2000, a powerful solar flare hit the Earth, which had enough energy to heat up the planet’s atmosphere and cause it to expand.

Because of this, the International Space Station lost almost 15 kilometers of altitude, so the engines had to be started to urgently raise the station above the earth’s surface.

What can powerful solar flares lead to

What can powerful solar flares lead to