(ORDO NEWS) — Scientists have discovered a new species of theropod dinosaur, Vectaerovenator inopinatus. Discovered after a series of random fossils on the Isle of Wight in the UK, it is believed to have lived approximately 115 million years ago, during the Cretaceous period.

The Latin name for the new dinosaur roughly means “unexpected air-filled hunter,” which gives you some idea of ​​how and where it was found, the type of dinosaur, and how paleontologists were able to find it.

All four discovered fossils are hollow or “air-filled”, which indicates the fragile structure of the animal and places it in the group of theropods, along with other dinosaurs such as tyrannosaurs and the ancestors of modern birds.

“We were amazed at how hollow the bones of this animal were – it was permeated with air spaces,” says paleontologist Chris Barker of the University of Southampton in the UK. “Parts of his skeleton must have been pretty fragile.”

“Data on theropod dinosaurs from the mid-Cretaceous period in Europe is not all that complete, so it was really exciting to be able to expand our understanding of the diversity of dinosaur species at that time.”

Four key fossils in the new study were found off the coast of the Isle of Wight. The fossil hunters are also referred to as co-authors of a new article on the findings, due soon.

After the fossils were donated to the Sandown Dinosaur Island Museum, experts set to work trying to identify them and put them together – and that’s when they realized they were dealing with a new species and a new genus.

This rarity, as well as the similarity of the bones, suggests that they all belonged to the same animal. Using methods of comparative anatomy, Barker and his colleagues were able to determine the type of dinosaur they were dealing with, as well as what makes it different from other species.

However, with only four pieces left, researchers are looking for additional material to be more confident that Vectaerovenator inopinatus was once a living breathing creature – presumably up to 4 meters in size. 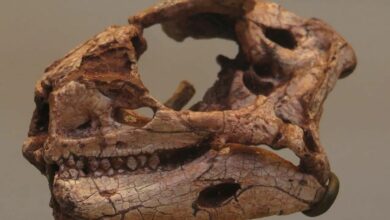