(ORDO NEWS) — More than 100 dead, thousands injured, destruction and countless material damage: this is what we know about the blasts that devastated several neighborhoods in the Lebanese capital on Tuesday after the explosion of a stockpile of ammonium nitrate, according to the government.

A first strong explosion in the Beirut port area took place on Tuesday around 6 p.m. (3 p.m. GMT), first followed by a fire and a few detonations, before a second explosion, much more powerful, which caused a huge mushroom in the sky and decimated the harbor and surrounding buildings.

The explosions, the blast of which was felt as far as the island of Cyprus, more than 200 kilometers away, were recorded by the sensors of the American Institute of Geophysics (USGS) as a magnitude 3.3 earthquake.

About 2,750 tons of ammonium nitrate were stored in the warehouse of the port of Beirut which exploded, explained Lebanese Prime Minister Hassan Diab.

According to the director of General Security Abbas Ibrahim, the shipment of ammonium nitrate, a chemical fertilizer and also a component of explosives, had been stored for years in the warehouse, near busy neighborhoods.

Ammonium nitrate is a white and odorless salt used as the base of many nitrogenous fertilizers in the form of granules, and has caused several industrial accidents, including the explosion in 2001 of the AZF plant in Toulouse (south-west of France). France), where some 300 tons of ammonium nitrates had exploded, killing 31 people.

In the United States, regulations regarding ammonium nitrate were tightened after the Oklahoma City bombing in 1995, where two tons of this chemical was used, killing 168 people.

There is no indication that the explosions were caused deliberately, according to the Lebanese authorities.

Hassan Diab said it was “unacceptable that a shipment of ammonium nitrate, estimated at 2,750 tonnes, has been present for six years in a warehouse, without precautionary measures”.

“This is unacceptable and we cannot be silent on this issue,” he added, according to remarks reported by a spokesperson at a press conference.

On Wednesday, the government demanded the house arrest of those responsible for this storage.

The port authorities, customs and security services were all aware that hazardous chemicals were stored at the port but have denied responsibility for the case, security sources told AFP.

The blasts left more than 100 dead and 4,000 injured as well as dozens of missing, according to the latest report provided on Wednesday by the Minister of Health, Hamad Hassan.

Research is still continuing in the neighborhoods around the port, whose streets are littered with debris of collapsed buildings.

Across the city, Beirutis were injured by glass shattered by the blast of the explosions.

According to Beirut Governor Marwan Abboud, up to 300,000 people are homeless as a result of the damage, which extends to nearly half the city and is estimated at more than three billion dollars (2.53 billion euros).

After declaring Beirut a “disaster” zone, the Lebanese government on Wednesday declared a state of emergency for two weeks for Beirut.

Lebanese President Michel Aoun has announced 100 billion Lebanese pounds (55 million euros) in emergency funding, as the country is already in the throes of an unprecedented economic collapse and hospitals are already overwhelmed due to the Covid-19 pandemic.

International aid, notably from Kuwait, France, Egypt, Greece or Qatar, and institutions begins to arrive in Lebanon on Wednesday.

The United States, Iran, and even sworn enemy Israel have also offered to help.

What caused such a powerful explosion is still unclear. With a very high degree of probability, the cause of the large-scale explosion was a Georgian cargo of ammonium nitrate / ammonium nitrate, which had been stored in the port of Beirut since the end of 2013.

This information was confirmed by the Prime Minister of Lebanon. But the US President said that it was a bomb explosion. 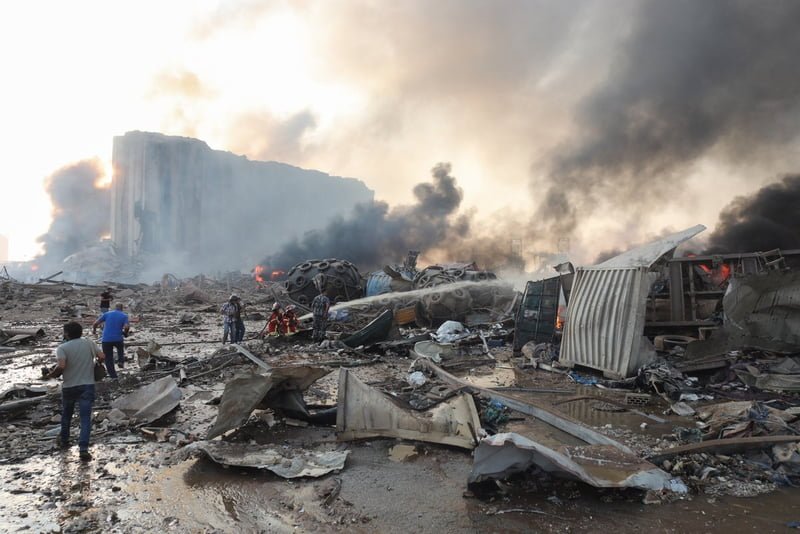 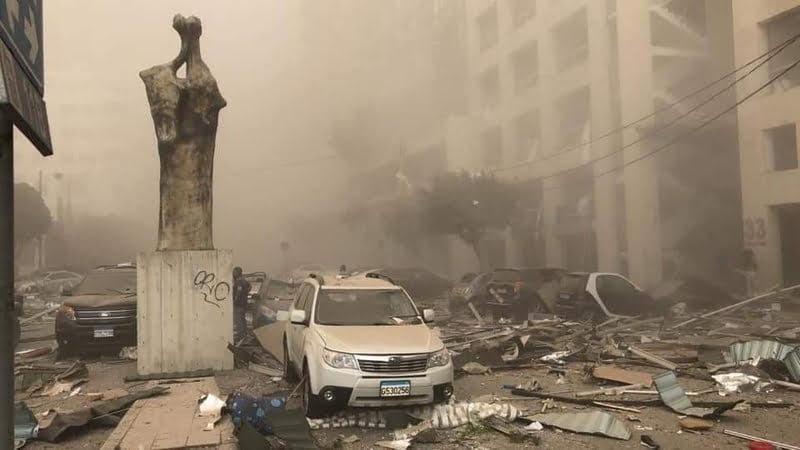 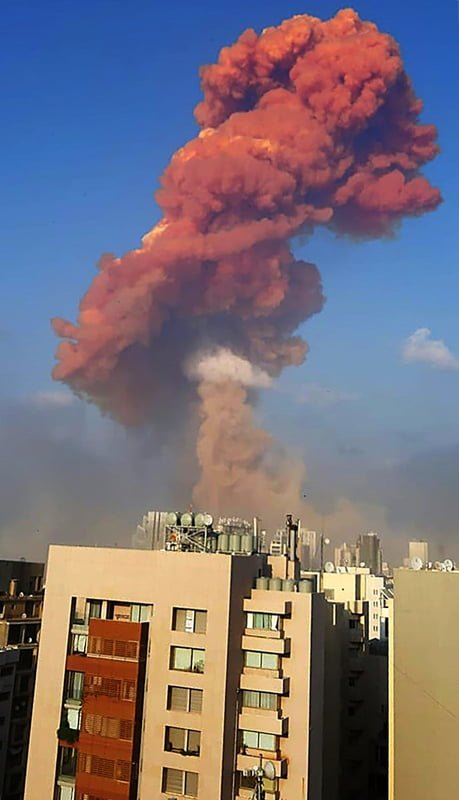 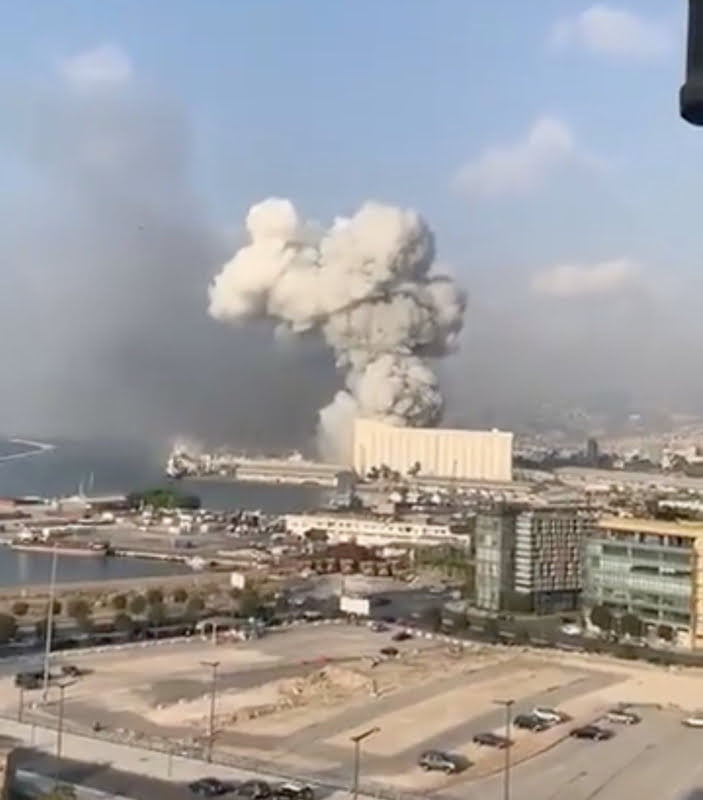 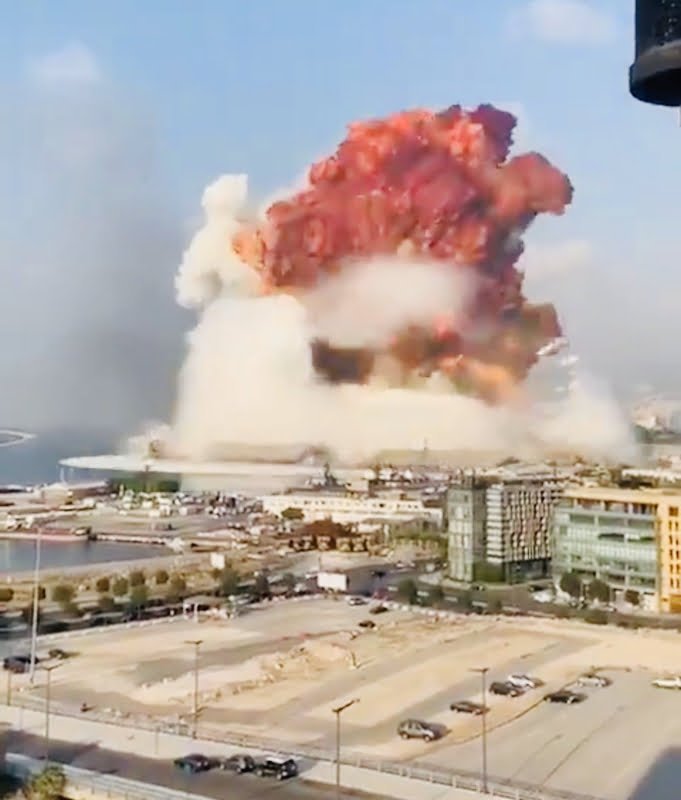 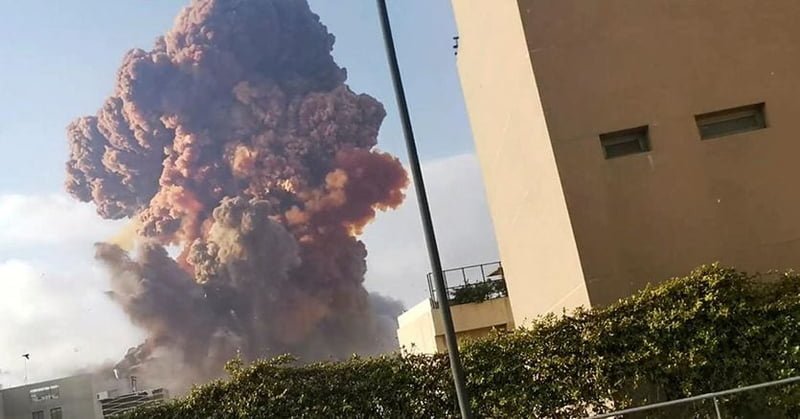 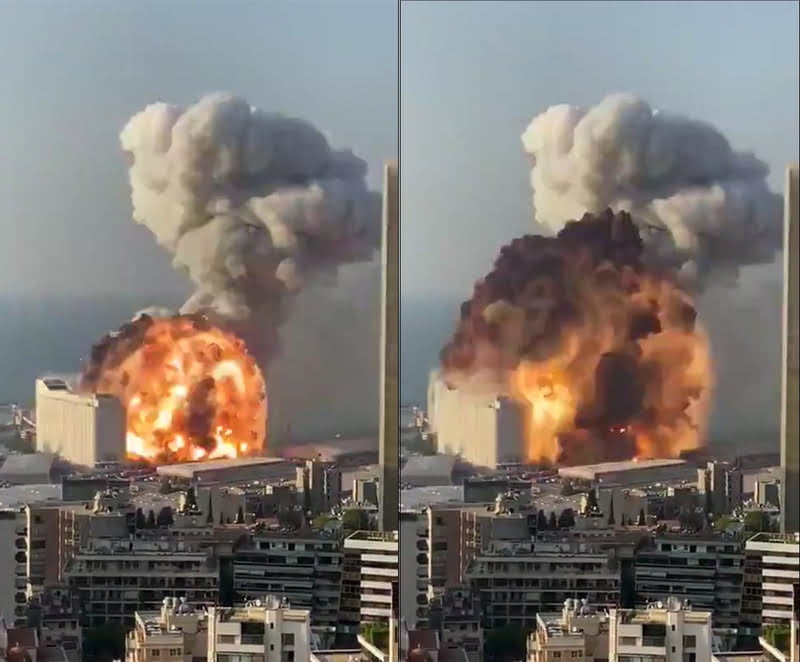 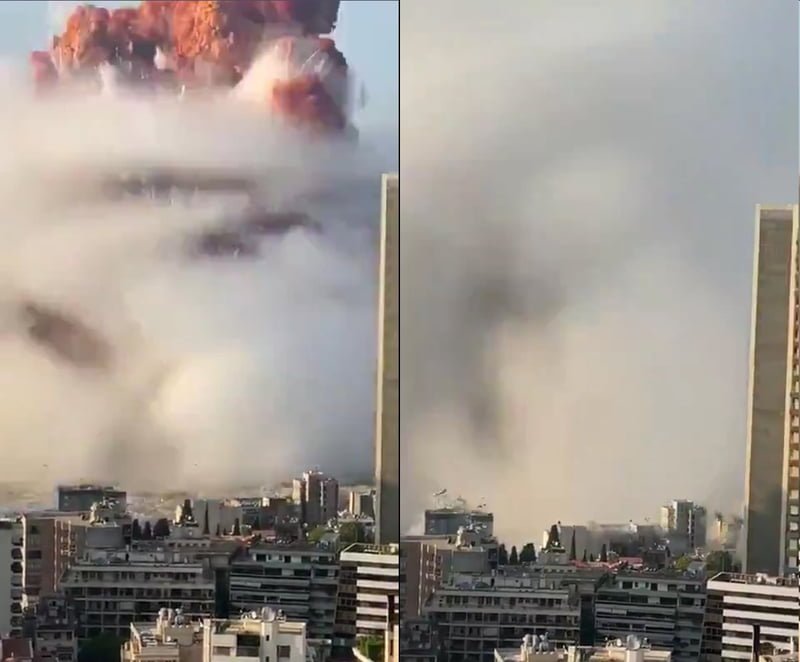 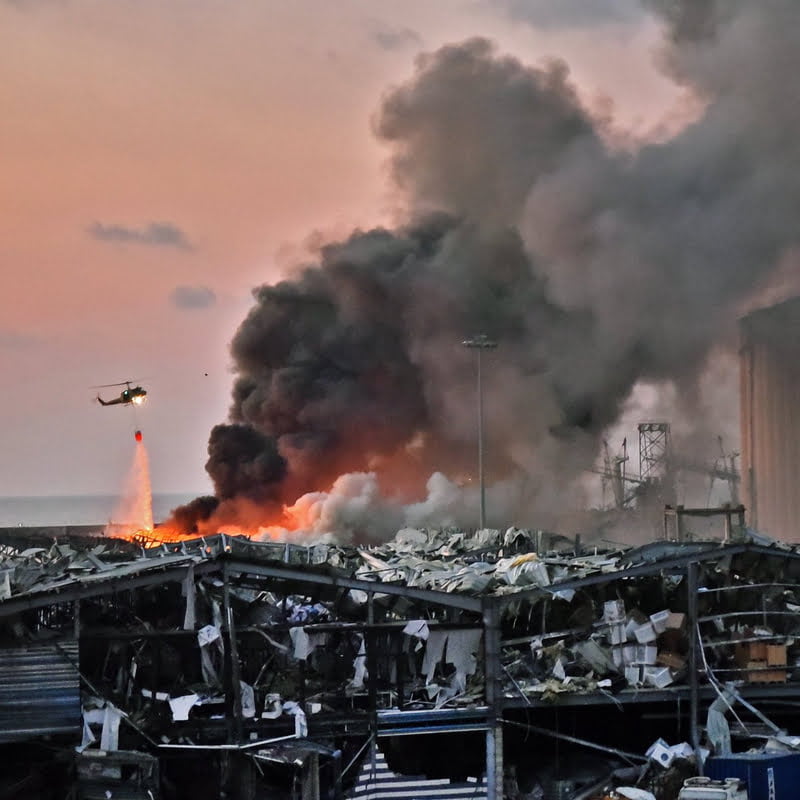 More than 100 dead, thousands injured and entire neighborhoods devastated: the Lebanese still in shock shouted their anger Wednesday after a disaster too caused by the explosion of tons of ammonium nitrate in the abandonment at the port of Beirut.

“The situation is apocalyptic, Beirut has never known that in its history,” said the governor of Beirut, Marwan Abboud, who had burst into tears on Tuesday in front of the cameras in the devastated port. Up to 300,000 people are homeless, he said.

The state of emergency was declared for two weeks the day after the double explosion presented as accidental by the authorities. The government is also seeking to “house arrest” those responsible for the storage of ammonium nitrate.

In the middle of the ruins, rescuers continue their search to find possible survivors, while dozens of people are missing according to the government.

Many countries have started sending aid – medical and sanitary equipment, field hospitals, first aid workers – including France, including President Emmanuel Macron, will be in Lebanon on Thursday.

According to the Lebanese authorities, a fire declared in the warehouse where some 2,750 tons of ammonium nitrate had been stored for six years, “without precautionary measures” at the port, are at the origin of the enormous explosions, the worst experienced. by Lebanon.

On social networks, many Lebanese citizens have called for the departure of all the country’s leaders, held responsible for this tragedy, while the political class is accused of corruption and incompetence in the face of an unprecedented economic and social crisis.

“Go all! (…) You are corrupt, negligent, destructive, immoral. You are cowards. It is your cowardice and your negligence that killed people”, launched a well-known Lebanese journalist, Marcel Ghanem, whose the television show enjoys a large audience.

“There are no words,” says Hazaa Khalil, owner of a restaurant in London. “We have already suffered enough: the coronavirus pandemic, the starving people, our money blocked in the bank (…) And now we have to deal with a disaster. No one is held responsible, neither are the politicians nor the government ”.

“This tragedy is further proof of the incompetence of the political class which has governed Lebanon for several decades”, indignant Antoine Fleyfel, Franco-Lebanese philosopher and theologian living in France.

The power of the explosions was such that they were recorded by the sensors of the American Institute of Geophysics as an earthquake of magnitude 3.3. And their breath was felt as far as Cyprus, more than 200 km away.

According to a latest provisional report from the Ministry of Health, at least 113 people perished, 4,000 were injured. “There are certainly still (victims) under the rubble.”

The governor of Beirut estimated the damage at more than three billion dollars.

At the near-destroyed port, containers look like twisted tin cans, cars are charred, the floor littered with papers from offices blown up by the explosion. Neighborhoods of Beirut are devastated.

The UN Agency for Agriculture and Food, FAO, fears in the short term a problem of availability of flour for Lebanon, grain silos installed near the port having been gutted.

Three days of national mourning have been declared. The authorities have declared Beirut a “disaster city”.

“It is unacceptable that a cargo of ammonium nitrate, estimated at 2,750 tons, has been present for six years in a warehouse, without precautionary measures. It is unacceptable and we cannot be silent”, said the Prime Minister. Minister Hassan Diab, hated by part of the Lebanese.

Ammonium nitrate is a substance used in the composition of certain fertilizers but also of explosives.

According to security sources, port authorities, customs and security services were all aware of hazardous chemicals being stored at the port but mutually denied responsibility for the matter.

“Out of respect for the countless victims” of the explosions, the Special Tribunal for Lebanon (STL) has announced postponing the reading of the judgment, initially scheduled for Friday, in the trial of four men accused of having participated in 2005 in the assassination of ex-Lebanese Prime Minister Rafic Hariri.

This tragedy comes as Lebanon experiences its worst economic crisis, marked by an unprecedented depreciation of its currency, hyperinflation, massive layoffs and drastic banking restrictions.

“Even with the coronavirus, and everything that has happened in the country, I have always had hope. But now it’s over, I have no more hope,” says Tala Masri, a volunteer, clearing the sidewalk glass breakage in the Mar Mikhaël district.