(ORDO NEWS) — The unconventional nature of UFOs challenges long-held, human-centered notions about the principles of freedom and self-government. As a result, the authorities are avoiding serious UFO research.

When Albert Einstein was asked about his opinion about flying saucers, he admitted that eyewitnesses “saw something”, but was not interested in finding answers for them: “What is it, I do not know, and I am not interested in it know”.

Here is the pursuit of knowledge.

It doesn’t take a Ph.D. to realize that the “authorities” lack a sense of urgency when it comes to studying UFOs, but it took a few PhD graduates to analyze the reasons for this.

Frustrated by the fact that unknown objects have been present in our skies for several decades, but “people still have no idea what they are, and do not even try to find out”, Drs. Wendt and Duvall tried to find out the motives for this willful ignorance.

They concluded that if the authorities determined that UFOs were the product of an intelligent race of non-humans, then our anthropocentric worldview would be called into question, and with it our modern system of government.

Stirring up a nest of saucers could even lead to the death of humanity itself, as aliens with the technology to allow them to reach our planet could be “sovereign solvers in their own right.” Because of this uncertainty, authorities are avoiding involvement in a meaningful UFO investigation.

The survival instinct of the state influences its institutions and cultivates a culture of academic apathy when it comes to UFOs. This “authoritative taboo against taking UFOs seriously” is bewildering when there are many reasons for curiosity.

The authors estimate that “25-30 percent” of reported cases cannot be explained by conventional means. These may be ordinary cases or “humanly unknowable” phenomena, but the bottom line is that people do not know either because UFOs have not been subjected to rigorous and honest investigation.

The level of official disinterest is unusual, since part of the state’s function is to partner with science to make things knowable for its citizens: “Through science, the state makes its subjects and objects known.”

Since science cannot explain UFOs or rule out the possibility of alien origin, their presence undermines the power of the state and distorts our sense of sovereignty.

Anomalous air objects appear without warning, violate the accepted laws of physics and cannot be recreated – actions that take them out of the control of earthly power. Their high degree of unknowability contributes to the official policy of indifference, despite the fact that “it is not scientifically known that UFOs are not aliens.”

Part of this paradoxical problem is that the only groups with the resources to conduct such research are people in positions of power – “precisely the subjects who most resist taking UFOs seriously.”

State-sponsored “UFO denial” comes in subtle forms. There is no public encouragement for UFO research, and as a result most of the research that is done outside of the “mainstream” is seen as a threat to “the foundations of scientific authority.”

The doctrine of derogation is so entrenched that many experts find it pointless to study unidentified flying objects, even if they are looking for a clear definition of the phenomenon.

The thought goes like this: “Members of the general public may believe that UFOs are aliens, but we know authoritatively that they are not.”

The state is content to formulate UFOs in terms of “believers” versus “non-believers” instead of knowing ones. And because “unbelievers have secured the authority of science… their views are accepted as fact.”

This mentality was immortalized in a memo written by Robert Lowe, coordinator of the 1966 government-funded UFO research project known as the “Condon Committee”:

“The trick, I think, is to describe the project in such a way that to the public it looks like a completely objective study, but to the scientific community it represents the image of a group of non-believers who are trying their best to be objective, but with little hope of finding a saucer.”

Politicians take a cue from this scientific orthodoxy and adopt the same skeptical stance: “If UFOs cannot be known scientifically, then why study them?” The cycle becomes self-fulfilling. Instead of attracting scientists, this deep secret has become taboo.

The main commandment of the state was: “You should not try very hard to find out what a UFO is.” These topics are worth considering as Congress and NASA expand their UFO research initiatives.

If some legislators in Congress feel like they’re going off the script – breaking the taboo on UFOs by suggesting the possibility of alien craft on Earth – they may be reading a few pages ahead.

The amount of defense funding that could be available to defend against an alien invasion is probably enough for any politician to hint at the possibility of the existence of adversaries from another world.

As the world waits patiently for the next public UFO report, if the authors of Sovereignty and UFOs are right, there will be few revelations and insights about potential extraterrestrial guests.

They claim that the authorities are good at making it appear that they are really doing something, when in fact they are not – they use “methods to make UFOs known without actually trying to find out what they are”.

Just imagine how much taxpayer money could be spent keeping a project alive that doesn’t seriously try to find an answer. (Coming to think of it, this is similar to most federal programs.)

Professional resistance to the UFO taboo is not an easy battle, and Drs. Wendt and Duvall warn that “those who attempt it will have difficulty funding and publishing their work, and their reputation will suffer.”

This is not because they are wasting their time fighting windmills, but because breaking a taboo “is a resistance to modern sovereignty as such” – a self-destructive path that modern rulers cannot approve of.

In the spirit of conservation, the state refrains from curiosity: “We are not saying that the authorities are hiding the Truth about UFOs, especially since it is a UFO. We are saying that they cannot ask this question.”

This leads to a controversy that results in authorities demanding proof of the existence of UFOs before agreeing to investigate them. 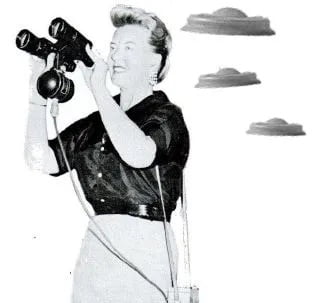 However, those in power can foresee something. How would people react if the rules that govern their society were suddenly broken by the discovery of an advanced extraterrestrial entity? Would they still swear allegiance to an earthly authority that was suddenly unsure of its place in the cosmic food chain?

Although President Ronald Reagan is credited with saying that nothing will unite people and governments around the world like the threat of an alien invasion, judging by the conclusions of the authors, he was wrong. If aliens arrived on Earth, humanity’s sense of superiority would be destroyed, and with it any semblance of modern rule.

“The UFO calls into question the claims of the state to protect its citizens, which it does not want to recognize. Since the threat is so serious, the only rational response is to ignore the UFO.”

Perhaps official efforts such as the Joint Program Office for Unidentified Aerospace and Underwater Phenomena (UAPJPO) and Project Galileo with scientists are signs that the UFO taboo is easing.

But it remains to be seen whether our desire to preserve human-centered notions of sovereignty and freedom will prevail over sincere attempts to get to the bottom of the truth, or whether the legacy of ignorance will prevail.

Radar tracks, eyewitness accounts and video footage prove the reality of UFOs, even if they are not extraterrestrial. The lack of a thorough investigation by the state “should surprise and alarm us all, and call into question the structure of government that requires and sustains it.”

Strange things in the sky are not specifically defined, which is why they frighten the authorities and threaten the postulates of human sovereignty.

Even if we are afraid of the answer to the UFO question, we should not be afraid to ask.

Why you need to brush your teeth before breakfast, and not after it

Why you need to brush your teeth before breakfast, and not after it