(ORDO NEWS) — At the moment, scientists are aware of the existence of 328 species of turtles, which differ in habitat, body size, lifestyle and many other features. The leatherback turtle (Dermochelys coriacea) is considered the largest of its kind, but it cannot be called the strangest and most cunning.

On the other hand, the alligator turtle (Macroclemys temminckii), whose shell is covered with thorns, is perfect for these criteria, and it uses its tongue in the form of a worm to lure victims during the hunt. Well, what – she looks strange and even frightening, but acts cunningly. Ideal candidate! Within the framework of this article, let’s figure out where in the world you can stumble upon these turtles, what they eat and are dangerous to people. Spoiler alert: If you pissed them off, you can’t do without blood.

Alligator turtles, also known as “vultures”, are predominantly found in the basin of the American Mississippi River. In other parts of our planet, they can hardly be found. It is quite easy to recognize them among other turtles, because you have hardly seen such warlike turtles even on TV – against their background, even ninja turtles seem harmless toads. The eyes of alligator turtles are directed sideways, there is a hooked beak on the nose, and the shell is covered with sawtooth ridges. Yes, a real warrior, to whom it is better not to even come close. 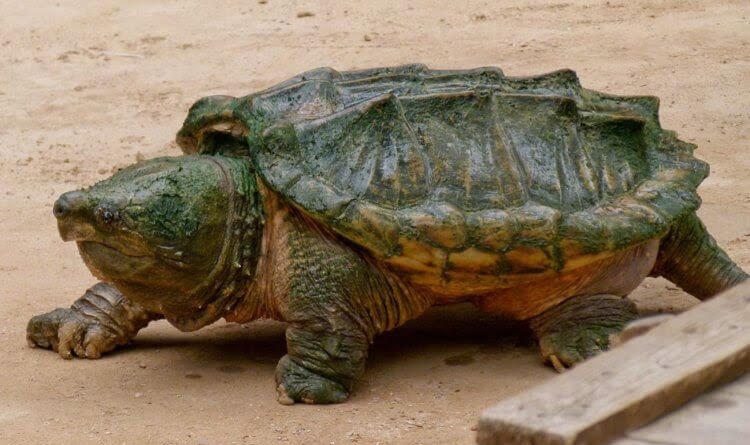 These turtles are alarming not only for their appearance, but also for their size. On average, their body length is about 1.5 meters, and their weight is 60 kilograms. However, according to some historical documents, people had to deal with real giants.

What do turtles eat?

The life span of turtles is about 70-80 years. All this time they feed on various fish, but sometimes snakes and even creatures of their own kind get into their diet. Since they, perhaps, hunt only a few: at first, the warlike creatures open their mouths wide and stick out their tongue, similar to a worm. They skillfully imitate the movements of real worms until some prey pecks at this bait. Then the turtles sharply shut their mouths and feast on their prey. The whole process was captured by the National Geographic team, I advise you to take a look.

As for the relationship between turtles and people, everything is up to chance. If you take an alligator turtle in your hands, it opens its mouth wide, but does not bite. However, if she is tormented and pissed off for a long time, she may well not stand it and bite through the skin to blood. Believe me, it will not seem enough to anyone. After all, there is evidence that these turtles sometimes attack their relatives, the outer layer of which cannot be called soft and unprotected. So human skin for them is like chewing gum, with the taste of juicy meat.

At the moment, alligator turtles are considered vulnerable and there are at least two reasons for this. Firstly, humanity is heavily polluting nature and animals are suffering from plastic waste and loss of natural habitats. Secondly, alligator turtles are sometimes caught for making turtle soup – this is strictly forbidden in many countries, but underground chefs clearly trade in this.

But turtles are killing not only humanity, but nature itself. Now on our planet there is a gradual increase in air temperature, again associated with human activities. Scientists have long found that the sex of turtles depends on the conditions in which the eggs were kept. If eggs lay in warm sand, then females hatch from them, and if in cold sand – males.

So, during global warming, female turtles will be born, but males will clearly not be enough. This is a direct obstacle to mating, so if these creatures are not helped, they can disappear completely.