US, WASHINGTON (ORDO NEWS) — Despite international criticism, tens of thousands have taken part in the celebrations for the reopening of Hagia Sophia as a mosque in Istanbul. The most prominent visitor to the first Friday prayer was President Recep Tayyip Erdogan.

The head of state spoke some verses of the Koran at the beginning of the museum. He later put the number of believers inside and outside at 350,000. Criticism of the transformation came from churches in other countries, but also from politics. Federal Foreign Minister Heiko Maas spoke of a “decision that we cannot understand”.

Prayer calls resounded from the minarets of Hagia Sophie for the first time since the conversion. It is estimated that tens of thousands of Muslims rolled out their prayer rugs around the mosque. Again and again one heard the call: “God is great”. Already in the morning, the authorities no longer let anyone into the designated prayer areas. Because of the Islamic ban on images, white curtains covered mosaics inside the mosque during prayer. A carpet was rolled out on the floor, on which the faithful knelt. 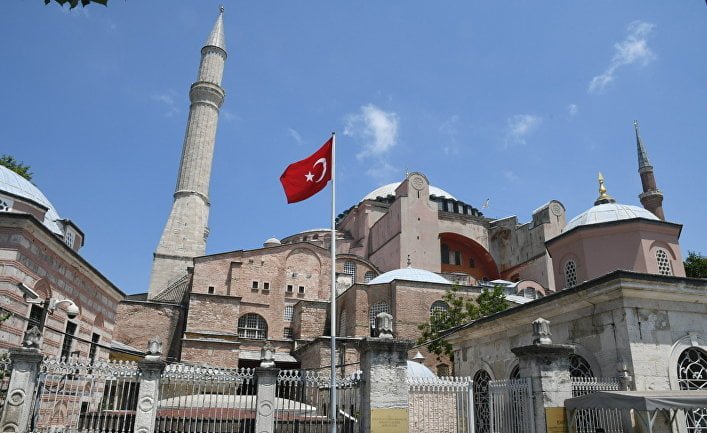 The Turkish Supreme Administrative Court canceled the status of Hagia Sophia as a museum two weeks ago. Erdogan then ordered its use as a mosque. The conversion met with harsh criticism internationally. The Hagia Sophia was built as a church in the 6th century AD and after the conquest of Constantinople (now Istanbul ) by the Ottomans converted into a mosque. The building was turned into a museum in 1934 by order of the founder of the Turkish Republic, Mustafa Kemal Ataturk.

Many had stayed in tents in front of Hagia Sophia or in the surrounding mosques. They stayed open to house the people. Authorities asked believers to wear masks because of the corona pandemic and to keep the minimum distance. However, it was disregarded in many places, as shown by television pictures. Streets in the historic old town were closed to traffic the previous evening.

Erdogan said that converting it into a mosque had fulfilled his “childhood dream”. According to a report by the Turkish news agency Anadolu, the President of the Supreme Religious Agency Diyanet Ali Erbas said in his sermon: “The longing of our people, which had turned into a deep wound in the heart, comes to an end.”

There is a lot of criticism internationally. Foreign Minister Maas told the Düsseldorf “Rheinischen Post” and the Bonn “General-Anzeiger” that the conversion was “not a contribution to international understanding”. As a World Heritage Site, the unique building has “significance far beyond Turkey,” said the SPD politician. Bundestag vice-president Claudia Roth (Greens) called the conversion in the SWR a “declaration of war against secular Turkey”. Erdogan “splits society” and tries to distract from the economic and corona crisis and corruption.

The Greek Orthodox churches in Greece and the USA reacted with sadness. The bells rang in numerous churches. Flags were set at half mast. In the evening, the Archbishop of the Greek Orthodox Church Hieronymus II wanted to hold a special mass in Athens Cathedral. The Greek government has repeatedly referred to the conversion as an “historic mistake”. Prime Minister Kyriakos Mitsotakis said with reference to Erdogan on the state television station ERT: “What is happening today is not a sign of strength, but a proof of weakness.”

The owners of the crashed helicopter accused Bryant of negligence

The oldest trees on the planet

The scientist told how viruses contributed to human evolution

Why people continue to believe in psychics

The owners of the crashed helicopter accused Bryant of negligence

The oldest trees on the planet

The scientist told how viruses contributed to human evolution

Why people continue to believe in psychics