Dust carried by the wind across continents and oceans not only makes the sky foggy, clogs the lungs and leaves a film on the windshield. Also known as mineral or desert dust, it can change the weather, speed up snow melt, and fertilize plants on land and in the ocean.

Particles from North Africa can travel thousands of miles around the world, causing phytoplankton blooms, saturating the Amazon rainforest with nutrients, and covering some distant cities in a veil of sand, absorbing and scattering sunlight.

NASA’s Earth Surface Mineral Dust Sources Survey (EMIT), scheduled to launch in June 2022, is designed to deepen researchers’ understanding of these fine particles of soil, silt, and clay from Earth’s deserts and, ultimately, their impact on climate.

The dark, iron-rich dust absorbs the sun’s heat and warms the surrounding air, while the lighter-colored, clay-rich particles do the opposite.

“Different types of dust have different properties – acidic, normal, light, dark – that determine how the particles interact with the Earth’s atmosphere, as well as with land, water and organisms,” said Robert O. Green, EMIT principal investigator and longtime researcher.

NASA Jet Propulsion Laboratories in Southern California. With EMIT data, he added, “we will be able to map dust source regions and understand how dust heats and cools the planet, and how this could change under future climate scenarios.”

Researchers at NASA and others have long taken notice of dust flight, a journey that can take hours or weeks, depending on particle size. Its atmospheric forcing is included in climate models, but it remains unclear whether the dust has a net warming or cooling effect on the planet, and how it changes over time.

What researchers have now comes from less than 5,000 sampling sites, mostly in agricultural areas where detailed soil information can serve agricultural or commercial purposes.

With few crops growing in deserts, dust-producing regions of the world tend to be understudied, so scientists are forced to assume dust composition in their computer simulations, which combine land, water and air data to model climate change.

“Usually in climate models, we model dust as yellow, the average color for all types of dust, but if you’ve ever been in a desert, you know that sand doesn’t come in one color,” Mahowald said. “Therefore, the assumption that it is homogeneous across the globe does not reflect what is happening in reality.”

Mapping the origin of

EMIT dust should improve this scenario. Aboard the International Space Station, a state-of-the-art imaging spectrometer will map the world’s mineral dust sources by collecting information about the color and composition of particles during orbital flights over dry, sparsely vegetated regions.

EMIT will focus on 10 important types of dust, including those containing iron oxides, whose deep red hues can cause extreme atmospheric warming.

Knowing which types of dust predominate on the surface in each region will provide new information about the composition of particles that are lifted and transported through the air. With this data, climatologists will be able to deepen their understanding of the regional and global impact of mineral dust on climate.

“There is a lot of variability in dust emissions – there is constant variability every second due to wind shear or rainfall, seasonal, annual and long-term variability,” Mahowald said.

“EMIT will provide dust source information that we will combine with other atmospheric and climate information to assess changes in emissions and better understand what has happened in the past and what will happen in the future.”

Over a billion measurements

The EMIT spectrometer takes sunlight reflected from the Earth, then separates it into hundreds of different colors and records them on a grid of light detectors.

The grid has 1,280 columns of 480 elements each, and each column is effectively its own spectrometer, reading the colors of a football field-sized area of ​​the earth’s surface. Together, the instrument’s detectors can scan a strip of land 80 kilometers wide at speeds in excess of 7 kilometers per second.

“Initially, scientists worked with single spectrometers,” Greene said. “Now we will fly over the Earth’s surface with 1,280 spectrometers, each of which will collect hundreds of measurements per second.”

During its operation, EMIT will make more than 1 billion new measurements. Since each type of dust has a unique reflective characteristic, researchers will be able to determine the mineral and chemical composition of substances on the surface.

The accuracy of these observations will make the EMIT instrument one of the most sophisticated spectrometers ever launched into space. 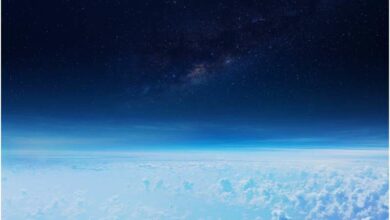