Researchers nicknamed the shark “Ironside” when it was first caught and tagged in 2019, as it was discovered off West Ironbound Island near Lunenburg, Nova Scotia. The 12.4-foot (3.7-meter) long shark was migrating when it appeared on the satellite.

“We think mating season is over and Ironbound is heading north to find a good prey base and bulk up again for next year,” Bob Hooter, chief scientist at nonprofit Ocearch, told CNN of the find.

Ocearch has been tagging and tracking great white sharks (Carcharodon carcharias) in an attempt to better understand their elusive migrations. A harmless device called a SPOT tag is attached to the dorsal fin and transmits the shark’s location to a global positioning satellite (GPS). The label is meant to fall off after a few years.

Tracking devices have a small error, that is, the exact location of a shark can differ by several feet or meters when it surfaces within the range of a GPS satellite.

“That margin of error could be the difference between one side of Long Island and the other,” George Burgess, marine biologist and director emeritus of the Florida Shark Research Program at the Florida Museum of Natural History, told Live Science in 2019.

Since the Ironbound was first tagged, it has traveled about 13,000 miles (20,921 km). Most recently it was spotted on May 3rd, according to Ocearch, when an adult male was much farther out in the Atlantic Ocean, east of Philadelphia.

Big whites are known to the public for their appearance in films such as Jaws (1975) and Sharknado (2013), as well as in the sequels of these films. However, their behavior is nothing like the way they are portrayed in the movies.

White sharks are often portrayed as “mindless killers” and “lovers of human flesh”. However, it is not; we just look like their food,” Laura Ryan, a postdoctoral researcher at Macquarie University in Australia, told Live Science earlier.

They migrate in search of food and reproduction, and have been recorded by researchers in temperate and tropical oceans around the world; they often appear off the coast of countries such as the United States, Australia and South Africa.

Great white sharks are vulnerable to extinction and their populations are declining, according to a 2018 International Union for Conservation of Nature (IUCN) assessment. While not technically endangered, sharks are at risk of becoming endangered due to human threats such as overfishing. 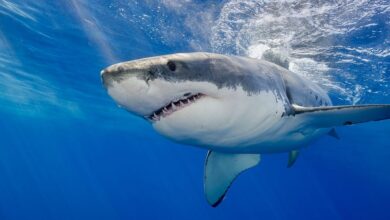