(ORDO NEWS) — On July 27, 1980, the Shah of Iran died in Cairo, struck down by cancer of the lymphatic system. Egyptian President Sadat, his last ally, offers a majestic funeral to the former monarch ousted by the Islamic Revolution.

Venerated then cursed by his people, instrumentalized then released by the Americans, Mohammad Reza Pahlavi had to flee from Tehran seventeen months earlier, after 37 years of a reign during which he had dreamed of making his country the fifth power of the year 2000.

After wandering between Morocco, the Bahamas, Mexico, the United States and Panama, the former autocrat, now stateless, came to take refuge in Egypt on March 24, with his “only friend”, President Anwar al-Sadat.

Already seriously ill, he was transported by helicopter to Meadi hospital and had his spleen removed, then began a long convalescence at Koubbeh Palace in Cairo, surrounded by the Shahbanou and their four children. But his condition had deteriorated.

A few hours after his death, in a message to the nation, Sadat announces “with deep sorrow” the death “of a friend and a brother”.

“Let us leave to history the task of judging Mohammad Reza Pahlavi as a ruler but we, in Muslim Egypt, we will show him recognition and respect as a man and as a Muslim”, he said, recalling that the former leader had “sided with Egypt in its difficult times”.

“Until the last moment, mocking the criticisms he aroused, both in the Muslim world and in his own country, the Egyptian head of state remained loyal to the one he kept calling the Shah”, writes AFP.

Their friendship dates back to the early 1970s. The Shah had sided with Egypt during the Arab-Israeli war of October 1973, sending medical aid and doctors, but above all by authorizing —- although ally of Washington – Soviet planes to fly over Iran to resupply Cairo with military equipment.

In Tehran, the death of the former sovereign is announced laconically by the national radio. “In the street, a few brief and timid concerts of warnings greeted the event,” writes the AFP correspondent in Iran.

The next day, she made the front page of the Iranian press: “The pharaoh is dead” Azadegan headlines, “The vampire of the century is dead”, poster Tehran Times, while Islamic Republic, the party organ, accuses the United States for having killed the sovereign in exile. 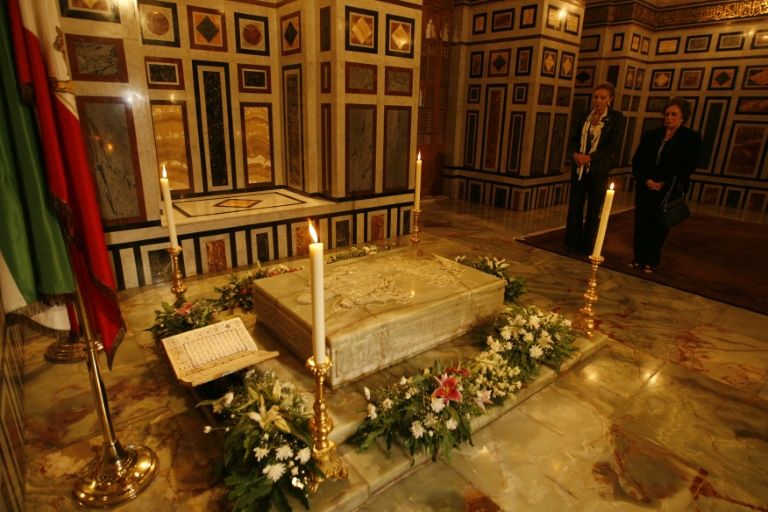 “For us, the death of the Shah is a small problem of no importance,” said Speaker of Parliament Ayatollah Hashemi Rafsanjani, the only senior official to comment on the death.

The “Islamic students”, who stormed the United States embassy in Tehran nine months earlier and until then demanded the extradition of the ex-Shah say they “do not want his corpse “and that the 52 hostages they hold will only be released” against the return of the property he has usurped “.

On July 29, after the execution of the imperial hymn, the Egyptian head of state takes the lead of the funeral procession leading the coffin, covered with the Iranian flag and placed on a gun carriage drawn by six horses, of the presidential palace at the Al Rifai Mosque.

No head of state made the trip. The United States, France, United Kingdom, Japan, Australia and Israel have dispatched their ambassadors.

Among the guests, former US President Richard Nixon considers “shameful” the hesitant policy of the US administration towards the ex-Shah, “an ally and a loyal friend of the United States for more than thirty years”.

Under a blazing sun, the procession crosses two kilometers of popular districts usually teeming with people. With an impressive order service, 100,000 people gathered along the route.

At the mosque, President Sadat and the two sons of former Shah, Reza Cyrus and Ali Reza, accompany the remains inside to the funeral hall and 21 cannon shots are fired in the public square.

He is buried in the same place where his father, Reza Chah, founder of the Pahlavi dynasty, was buried for a few years, until the early 1950s, after his death in exile in South Africa.