Believe it or not, the answers to these questions will cause controversy. The fan seems to be running, and the various answers to questions about the location of Mecca sometimes cause quite a bit of confusion.

Some people will denounce the answers as blasphemous, while others will argue for a blatant lack of intellectual and historical honesty in the answers. Mecca has long been in Saudi Arabia, but has it always been there?

Makkah al-Mukarrama is the official name of Mecca. Makkah is the official Saudi transliteration, close to the Arabic pronunciation. Mecca is 70 kilometers (43.5 miles) east of the Red Sea in the province of Mecca in the Hejaz region of Saudi Arabia. But that’s not the end of the story.

It is believed that there is a spring or well in Mecca, which God miraculously created when His angel ministered to Hagar and Ishmael after they were exiled and were on the verge of death after many days of wandering in the wilderness.

Mecca is the birthplace of the Prophet of Islam Muhammad. Moreover, Muhammad claims that it was in Mecca that Allah revealed the Koran to him.

The black stone honors Mecca even more. According to legend, he was lowered to Adam after the fall to show him the place for the construction of the temple.

Today, the Black Stone is installed in the eastern corner of the Kaaba, a cube-shaped granite building at the center of the Masjid al-Haram in Mecca, the largest and holiest mosque in the world.

Muslims all over the world, if they are physically and financially capable, are required to make the pilgrimage or Hajj to Mecca and the Kaaba at least once in their lives. In addition, Muslims around the world direct their attention during daily prayers towards the Masjid al-Haram. 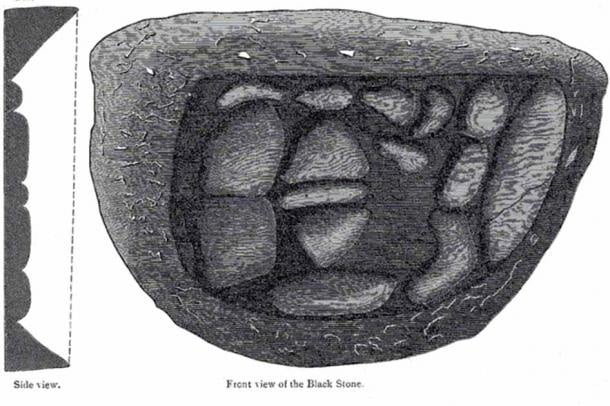 The location of Mecca is largely due to the original location of the Black Stone, which is a fragmentary collection of the “original” large black stone, broken into pieces. Fragmented Black Stone as it appeared in the 1850s, front and side illustrations.

Was Mecca here one day and somewhere else the next?

This is a simple question. No one thinks that Mecca traveled through the Middle East or even across the ocean to Harlem. The question is whether the Masjid al-Haram was always located in Mecca or in ancient times it was located elsewhere.

Everything sounds good except for one thing. Jerusalem has been around for a decent amount of time. It was a settlement around the 3rd millennium BC, and the first historical mention of it dates back to the 2nd millennium BC. Archaeological excavations have discovered a huge number of ancient relics in the vicinity of modern Jerusalem.

According to the story that Islam propagates, Ishmael and Abraham built the Kaaba to place the Black Stone in it. Thus, the first after Adam and Eve, in the beginning, was Abraham in the 2nd millennium BC, when they erected the Kaaba in the Masjid al-Haram.

However, the idea that this place was Mecca stands on empty ground. Archeology cannot find the same artifacts from the 2nd millennium BC around Mecca as around Jerusalem. If Mecca was such a holy place, making it a popular tourist destination even in 2000 BC, shouldn’t there be a few relics buried in the dust of those distant days?

He claims to have explored the first Islamic mosques and found that the lines drawn in the direction of each of them intersect at the site of the ancient city of Petra. What could be more compelling than to force the shrines of Islam to invalidate the location of its holy city? The earliest mosques in Iran and Egypt faced east, but as this diagram shows, they were oriented to a location north of present-day Mecca.

Virtually all Islamic scholars dispute this, arguing that the exact location of Mecca was not easily found by the architects of early Muslim mosques, and they used astronomical horizon phenomena, namely the winter sunrise in Egypt and the winter sunset in Iraq.

Are there any other witnesses to testify?

The fact that the Black Stone has not remained where it is now, since the fall of Adam, is not in dispute. The Karamats removed the Black Stone in 980 AD and took it to their territory in the Persian Gulf.

They owned the Black Stone for twenty years and brought it back to Mecca in 1002 AD. This was not the only case of the Black Stone moving. It appears to have been stolen several times throughout history, but it has always somehow ended up in the Kaaba.

If the story of how Hagar and Ishmael were saved by an angel in Mecca is true, then one must believe that Hagar was able to travel 1,000 miles of desert to get to Mecca from the Holy Land, and then do it all over again to return – and with small child!

At the time of Muhammad, the current location of Mecca would not have been an oasis. It would not be impressive if it were not for the number of pagan cults, dust and heat. In addition, it was not close to the central trade route.

Finally, there is no mention of Mecca before the rise of Islam in historical records. Muhammad was born in Mecca in 570 AD. However, the first mention of Mecca appeared only in 741 AD in the Byzantine-Arabic chronicle, and it says that it is in Mesopotamia, and not in the Hejaz. The Mecca area and the main tribes of Saudi Arabia at the dawn of Islam, showing an overwhelming concentration in the area around Mecca

So far, we have only touched on the tip of the iceberg by talking about several reasons why the Holy City of the Quran cannot be located in Mecca. There are many other ideas about why Mecca is not the original Holy City. If the number of arguments against Mecca matters, don’t make any real estate investments in the area.

Sometimes how you see something depends on where you stand. The historical record may be silent about Mecca, but the absence of any mention should not be taken as positive evidence that Mecca was never a Holy City. At best, silence is only circumstantial evidence.

Artifacts found in the vicinity of Jerusalem have nothing to do with Mecca. Some might say, “No ancient artifacts have been discovered around Mecca. So what?”

As for the Black Stone, the first comment made here remains unrebutted. Although the Black Stone may have been stolen and absent from Mecca for several periods of history, it has always returned to the Kaaba, where it is currently on display.

Why should Hagar’s journey through the desert to Mecca be unusual? A thousand miles of desert is a sobering thought, but so is the idea that the Jewish people will wander in the wilderness for 40 years until they reach the Promised Land.

We move on to the next item. The Qur’an speaks highly of Mecca. He seems to be taking a picture of today’s Mecca and then exaggerating and distorting it.

This is not an unusual literary device. Exaggeration is often used to showcase some aspect of something. In this case, the beauty and importance of Mecca is exaggerated. Criticism of this technique requires an answer: “So what …?”. Islamic prophet Mohammed resolves dispute over raising the black stone to its place in Al-Kaaba, Mecca, Saudi Arabia. In the center, the Prophet Muhammad, with two long braids of hair, puts a stone on a carpet, which is held at the four corners by representatives of the four tribes, so that everyone has the honor to pick it up.

And then there are the big guns…

In one of the stories of the Qur’an, Muhammad destroyed 360 pagan idols displayed on the Kaaba. It is unlikely that this story took place in Petra.

At the time this story took place, Petra was under the firm control of the Byzantine Empire. Byzantine culture and religion forbade the pagan worship spoken of in Mecca. This story is best suited to Mecca.

The orientation of early mosques away from Mecca and towards Jerusalem, Petra, or elsewhere is often the main focus of those who want to challenge Mecca as the Holy City.

Some of the earliest mosques probably faced Jerusalem, as was the custom before Muhammad. Although Muhammad was born in 570 AD, the oldest copy of the Qur’an discovered dates back to 670 AD.

Another explanation is that we should give the early Muslims a break. They did everything they could to orient everything towards the Kaaba. Misunderstanding how a round earth affects straight lines on a flat surface can be a source of error.

The strongest argument is the Islamic tradition of praying in the direction of the Kaaba and how the average person should think about the law they encounter while praying.

Imans say that it is very easy to determine the direction of prayer. Any direction between east and west is acceptable.

Thus, according to this standard, the mosques would seem to abide by the law by facing somewhere in the Mecca area. If Islamic leaders no longer care about exact directions, then why should anyone outside of Islam make stricter demands?

What does science have to do with this?

Is it right to try to use science to justify or challenge the stories, practices, or principles of any religion? When we consider the foundations of science and religion, we find that they are built on different materials.

Science is based on knowledge. Religion is based on faith. Knowledge and faith occupy two different spheres.

It would be absurd to confirm E=Mc 2 based on belief in its truth. It is equally absurd to suggest that Muslim tradition is somehow debunked if one assumes that no Muslim ever knows exactly which direction the Kaaba is.