(ORDO NEWS) — July 2022 is rich in astronomical events: the whole month will continue a great opportunity to observe a rare phenomenon – noctilucent clouds, especially spectacular at sunset or before sunrise.

In addition, on July 4, the Earth passed aphelion – that is, it was at the farthest distance from the Sun. And on July 13, the supermoon of 2022 will occur – the coincidence of two important astronomical moments associated with the moon. What is this phenomenon and how it affects natural disasters and human health – read on.

The emergence of the term “Supermoon”

Supermoon is not an official astronomical term. The word was first used by American astrologer Richard Nolle in a 1979 article for Dell Horoscope magazine.

Nolle gave the following definition of a supermoon: “a new moon or a full moon at the moment of maximum or almost maximum (within 90%) approach of the Moon to the Earth in a given orbit.”

It wasn’t until 2011 that the word “supermoon” began to appear in the popular science media, and now even NASA is quoting Nolle’s definition.

The scientific name for a supermoon is “perigee-syzygy of the Earth-Moon-Sun system.”

Perigee is the closest point to the Earth that the Moon passes during a complete revolution around our planet. The furthest point from the Earth to the Moon is called the apogee.

Perigee and apogee exist because the Moon’s near-Earth orbit is not a perfect circle, but an ellipse. The average distance from perigee to Earth is 363,300 km, and from apogee to Earth, 405,500 km.

A supermoon is the moment when the full moon approaches the Earth at a distance closer than 362,000 km, and the moments of perigee and full moon passage are no more than 3 days apart.

The coincidences of these two moments (perigee and full moon) happen every year, but close coincidences (less than 9 hours) are quite rare.

What happens during a supermoon

Syzygy in astronomy means the alignment of three or more celestial bodies on one straight line. Most often, this term is used in relation to the Earth, the Sun and the Moon, or any planet in the solar system. During the syzygy of the Earth-Moon-Sun system, we observe a new or full phase of the Moon.

If the Moon comes closer to the Earth during a new moon, then observers will not see anything, just like during any other new moon. 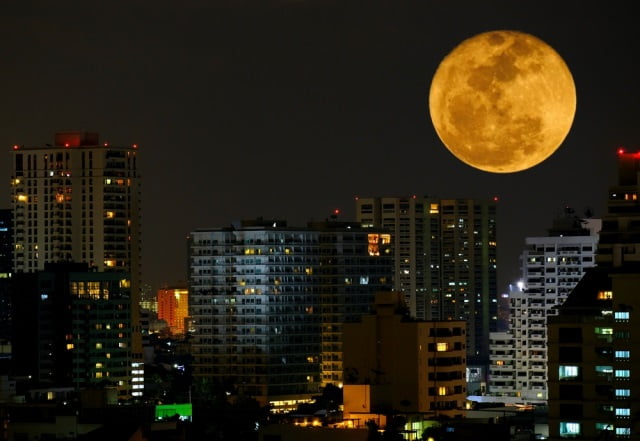 Super full moons happen three to four times a year, so it’s not that uncommon. In general, a supermoon only occurs during a full moon or a new moon at or near perigee.

However, the cycles of the phases of the moon and the movement of the moon from perigee to perigee do not always coincide: the lunar month (from full moon to full moon or from new moon to new moon) lasts 29.53059 days, while the anomalistic month (from perigee to perigee) lasts 27.55455 days. Both cycles coincide every 14 lunar and 15 anomalous months:

On July 13, 2022, the full moon will appear above the horizon after 21:00 and will reach its maximum height above the southern horizon around midnight. All night until sunrise, the supermoon will shine in the constellation of Sagittarius.

In the sky in clear weather, to the east, you can see two planets that accompany the supermoon of 2022 – this is Saturn, and a little more to the left (east) – Jupiter. Three stars of the Summer Triangle shine above the supermoon, and to the right (west) is the bright Arcturus from the constellation Bootes.

The effect of the supermoon on the human body

No matter how unscientific predictions scare us, supermoons do not affect people’s health. Experts from the University of Washington School of Medicine, Tokyo Medical University, the Max Planck Institute for Medical Research and Oxford University analyzed data from emergency rooms and major mental hospitals over the past 50 years.

It turned out that the number of nervous breakdowns, panic attacks and psychological disorders on supermoon days is the same as on ordinary days. A pronounced connection between the approach of the Moon to the Earth and between the state of health has not been identified.

Despite the lack of scientific justification, about three million people on the planet claim to feel the approach of a supermoon. The most common symptoms are headache, tachycardia, sleep problems, irritability, and unreasonable restlessness.

Doctors believe that in addition to lunar activity on the night of a supermoon, magnetic storms and pressure drops can affect a person’s condition. The combination of these factors causes health problems and an unstable emotional state in some people.

The influence of the supermoon on nature

Contrary to popular belief, supermoons do not cause floods, earthquakes, volcanic eruptions, or tsunamis. They only cause slightly higher tides: a couple of centimeters higher than normal tides during full moons.

If the weather on the coast at this time is bad, then high tides, of course, will not improve it, but their influence is hardly noticeable.

What other supermoons will be in 2022

What is a supermoon

What is a supermoon