(ORDO NEWS) — The history of footwear has more than one thousand years. The first evidence of footwear is known from prehistoric times.

Modern fashionistas would be surprised to learn that their very distant ancestors wore shoes made of leather and fur. True, instead of leather straps, mostly dry parts of trees and even durable grass were used.

With the development of society, shoes have also improved.

So in ancient Egypt , only sadists could walk on the sand barefoot: their feet were hot and painful. Therefore, not from a good life, the Egyptians wore sandals, which were made from palm leaves and leather.

The more noble a person was, the more expensive his shoes. A noble nobleman could decorate the straps with precious stones.

Jews can be considered real fashionistas of those times.

They wore not only sandals and shoes, but even knew how to make the first boots. Jews often used incense as a badge of distinction.

They were put into heels, first hidden in special bottles. So, the feet of a nobleman or a rich man smelled like a flowering garden. 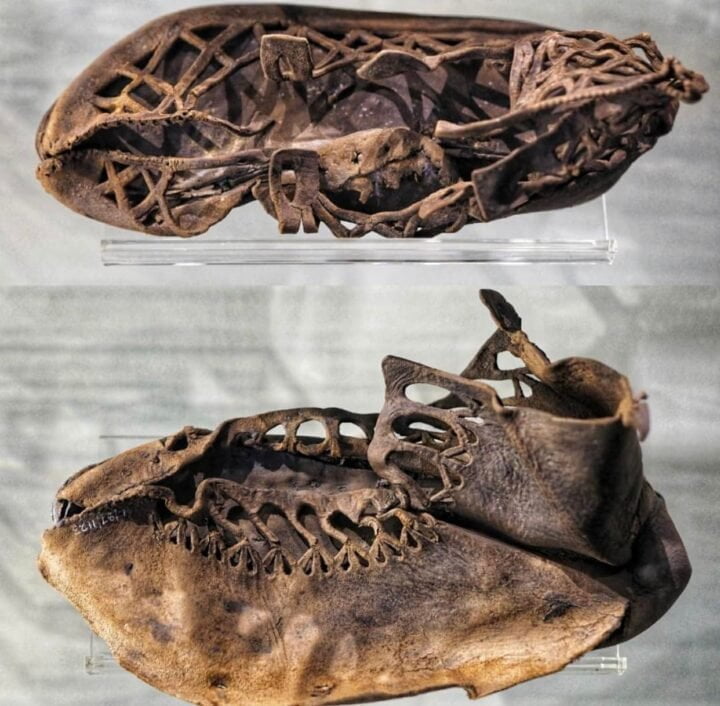 In Ancient Greece, many people wore sandals, although they were not the only footwear.

For example, in theaters, actors used koturny – such huge flip flops on a tall platform. It was not a tribute to fashion, but a necessity, since it was easier to notice the actor on stage in cothurns.

But Greek hetaeras can be called the saviors of women’s shoes. It was from their submission that sandals with laces appeared, elegantly fitting the legs. Also, hetaerae created the first stocking boots and open-toed shoes, which showed graceful female toes. By the way, at first all the shoes were the same: both for the left and for the right foot.

The commoners had shoes that covered the foot, or sandals. The soldiers wore shoes with nails in the soles, but the actors relied on rope slippers.

In those days, it was very easy to determine who was in front of you: you had to count the number of straps. By the way, most often the Romans wore white or black shoes, but scarlet shoes could only be obtained on major holidays.