(ORDO NEWS) — New radiocarbon dates show that the large Early Holocene cemetery of Yuzhniy Oleniy Ostrov, at Lake Onega, some 500 miles north of Moscow, previously thought to have been in use for many centuries, was, in fact, used for only one to two centuries. Moreover, this seems to be in response to a period of climate stress.

The team believes the creation of the cemetery reveals a social response to the stresses caused by regional resource depression. At a time of climate change, Lake Onega, as the second largest lake in Europe, had its own ecologically resilient microclimate.

This would have attracted game, including elk, to its shores while the lake itself would have provided a productive fishery. Because of the fall in temperature, many of the region’s shallower lakes could have been susceptible to the well-known phenomenon of winter fish kills, caused by depleted oxygen levels under the ice.

The creation of the cemetery at the site would have helped define group membership for what would have been previously dispersed bands of hunter-gatherers – mitigating potential conflict over access to the lake’s resources. But when the climate improved, the team found, the cemetery largely went out of use, as the people presumably returned to a more mobile way of life and the lake became less central. 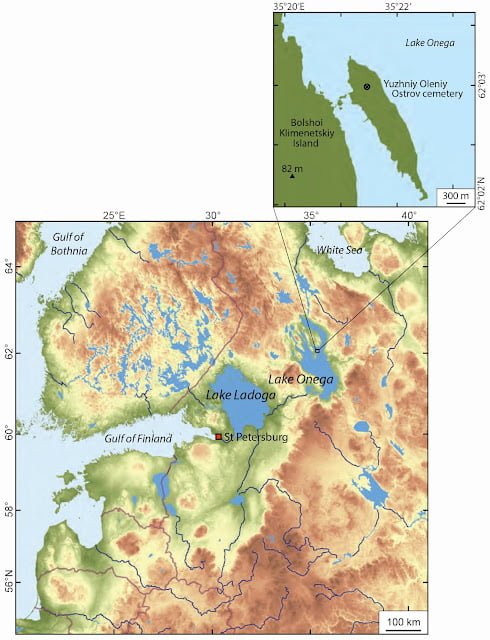 “The close association of the cemetery’s use with the climate downturn between 8200 and 8000 years ago took us completely by surprise. Previously, it was thought that the site was used for burial both before and after this.

It is rare to find prehistoric hunter-gatherer communities apparently reacting to a rapid climate event like this, and we certainly would not have predicted this response – a temporary abandonment of the region until the climate improved might have been on the cards, for example. Either that, or no response at all, given the flexibility for which hunter-gatherer communities are so well known”, Rick Schulting explains.

The behavioural changes – to what could be seen as a more ‘complex’ social system, with abundant grave offerings – were situation-dependent. But they suggest the presence of important decision makers and, say the team, the findings also imply that early hunting and gathering communities were highly flexible and resilient.

The results have implications for understanding the context for the emergence and dissolution of socioeconomic inequality and territoriality under conditions of socio-ecological stress.

Radiocarbon dating of the human remains and associated animal remains at the site reveals that the main use of the cemetery spanned between 100-300 years, centring on ca. 8250 to 8,000 BP. This coincides remarkably closely with the 8.2 ka dramatic cooling event, so this site could provide evidence for how these humans responded to a climate-driven environmental change. 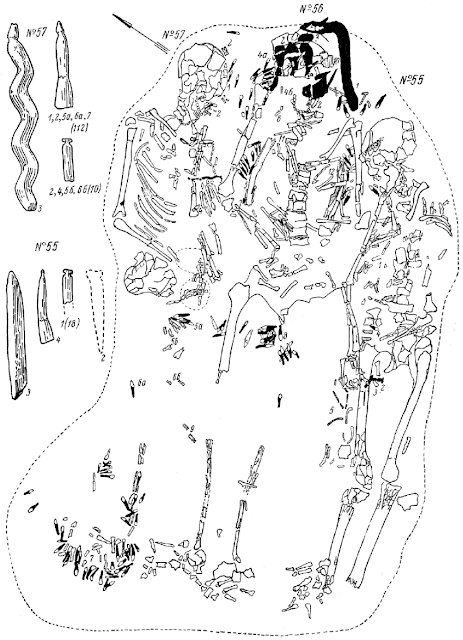 The Holocene (the current geological epoch which began approximately 11,700 years before present) has been relatively stable in comparison to current events. But there are a number of climate fluctuations recorded in the Greenland ice cores.

The best known of these is the 8,200 years ago cooling event, the largest climatic downturn in the Holocene, lasting lasted one to two centuries. But there is little evidence that the hunter-gatherers, who occupied most of Europe at this time, were much affected, and if they were, in what specific ways.

Yuzhniy Oleniy Ostrov is one of the largest Early Holocene cemeteries in northern Eurasia, with up to 400 possible graves, 177 of which were excavated in the 1930s by a team of Russian archaeologists. Based on their work, the cemetery site has an important position in European Mesolithic studies, in part because of the variation in the accompanying grave offerings. Some graves lack these entirely, to those with abundant and elaborate offerings.

High concentrations of hazardous chemicals found in the Arctic

High concentrations of hazardous chemicals found in the Arctic 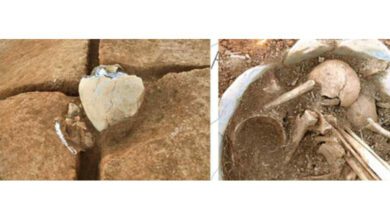 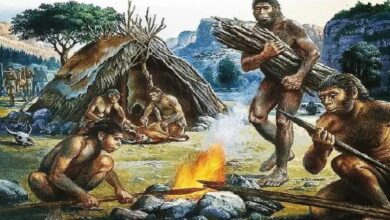