(ORDO NEWS) — A detailed analysis of the composition and motion of over 500 stars has revealed strong evidence for an ancient collision between Andromeda and a neighboring galaxy.

Galaxies grow by adding material from nearby objects – other galaxies and dense clusters of stars called globular clusters – often after a catastrophic collision.

These events leave behind relics in the form of stellar associations, which astronomers call tidal phenomena. They may include elongated streams or arcuate shells moving around the surviving galaxy.

Studying these phenomena can help us understand the history of the galaxy and the forces that have shaped its appearance and composition.

“The remnants of each collision can be determined by studying the movement of stars and their chemical composition.

Together, this information serves as a kind of fingerprint that can be used to identify the stars that joined the galaxy as a result of the collision, ”explained Ivanna Escala, a Carnegie researcher.

She and her colleagues examined 556 red giant branch stars in Andromeda’s physical feature called the Northeast Shelf, which forms a sharp bulge in the density of the galaxy’s material.

“We have developed the first detailed characterization of the chemical composition and geometrical motion of stars in this region of a neighboring galaxy, convincingly demonstrating that the Northeast Shelf is a tidal sheath composed primarily of post-collision debris,” Escala explained.

Their work also shows that the northeast bulge is part of a multi-shell system with the west and southeast shelves of the galaxy, and that the material in these regions matches that of the Andromeda Giant Stellar Stream, linking all of these tidal features as potentially coming from a single source.

An analysis of this level confirms predictions about Andromeda’s turbulent history and deepens astronomers’ understanding of how collisionally accreted material shapes the galaxy’s surrounding features and evolutionary history.”

Alex Collier Aliens from Andromeda told about the origin of mankind

Alex Collier Aliens from Andromeda told about the origin of mankind 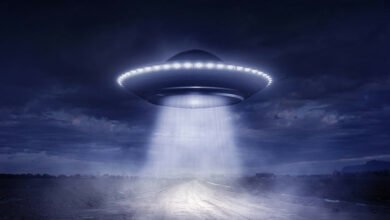