(ORDO NEWS) — When sinkholes open up on land, it’s terrible. In an instant, they can swallow everything that is above, be it a road, a structure or an ancient creature, whose bones will see the light again after millennia.

However, failures occur not only on land. A similar phenomenon also takes place in the ocean, creating mysterious “blue holes” that disappear into dark nothingness. Unlike underwater caves, which are underground, blue holes have only recently been discovered in the sea, making them much more difficult to explore and understand.

However, they represent a valuable opportunity for scientists seeking to learn more about the life forms and underwater conditions found in these unique marine formations.

As part of an ongoing three-year research project, a multinational team of scientists is set to explore next month a blue hole called the Green Banana, located on the continental shelf off the coast of Florida.

The NOAA-funded project , which includes researchers from the Mote Marine Laboratory, Florida Atlantic University, Georgia Institute of Technology, and the US Geological Society, will deploy equipment and prepare divers to investigate the sinkhole that opens 47 meters below the sea and extends to a depth of about 130 meters.

The goal is to study what microbes live in the blue hole, measure the nutrient levels in the underwater pillar, and assess whether it is related to the Florida groundwater system adjacent to the Gulf of Mexico. 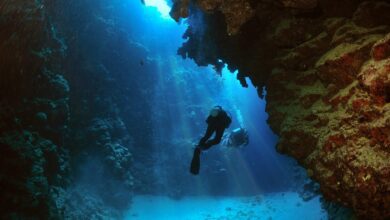 Blue Hole – the most dangerous place for divers