(ORDO NEWS) — There are legends and tales in the world that are old and almost forgotten. Once these legends were proudly passed down from generation to generation, but gradually they were swallowed up by the inexorable passage of time. And some of the most mysterious lore can be traced back to the North American continent, where they were once treasured by Native American tribes.

When European peoples first set foot on the American continent, they came into contact with various tribes, many of which were quite different in customs, appearance and language. And from the time of this first contact, some quite unique legends have been preserved, documented in their original form by these first chroniclers.

Undoubtedly, the most mysterious of all Native American legends is the story of the “moon-eyed people,” mysterious white people who fought and mingled with the Native Americans long before the arrival of Europeans. Could there be any truth to this myth? 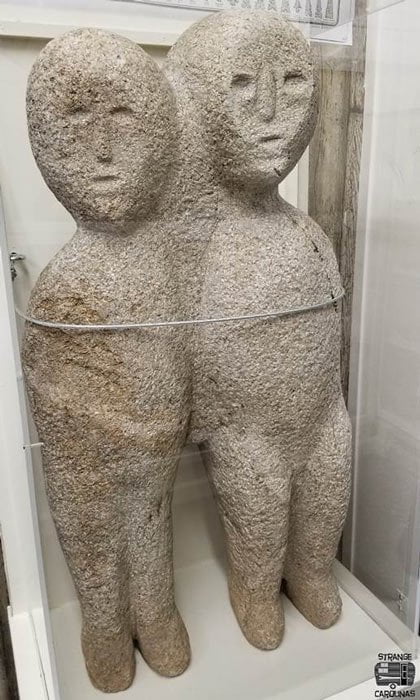 Coming into contact with the Native American Cherokee tribe, the European settlers drew attention to an unusual legend that had existed in the tribe for many generations. Even at that time, around the mid-1700s, this legend was told only by a few elders and leaders of this tribe.

They all spoke of the mysterious moon-eyed people, a unique “race” of people who lived in the region of Southeast America before the arrival of the Cherokee. Legend has it that these men, supposedly white, were “unable to see in daylight” and that they fought the Cherokee. The latter expelled these “unfortunates” and settled in their lands, where they remained for many generations.

The first European documentary confirmation of the legend dates back to 1797, when the famous American botanist and professor Benjamin Smith Burton, in his book, writes about these ancient moon-eyed people, apparently firsthand. He refers to Colonel Leonard Marbury, who served as an intermediary between the American government and the Cherokee tribe. Burton writes: “The Chiraka are told that when they first arrived in the country they inhabit, they found that there were certain ‘moon-eyed people’ who could not see during the day. These unfortunates they expelled.” 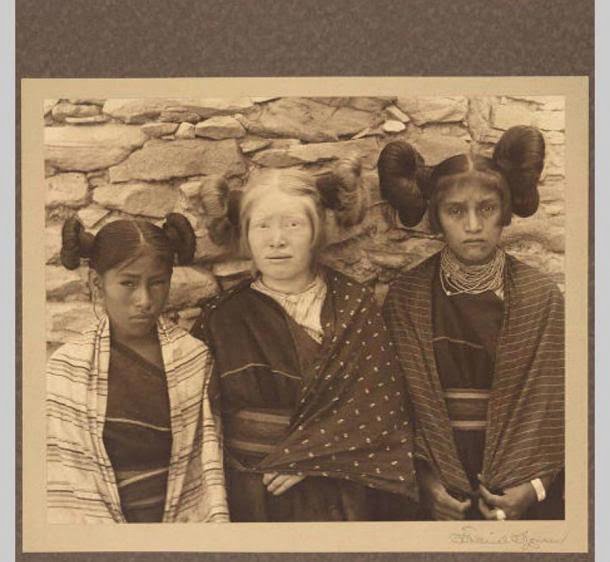 The Welsh marine explorer Lionel Wafer Wafer, in his book A New Voyage and Description of the Isthmus of America, published in 1699, writes:

“Among the people of this country there is one so unusual type of face that I have never seen or heard of the like of them in any part of the world. They are white, and among them there are both sexes; they differ from other Indians mainly in skin color, but not only that, their skin is not as white as that of fair people among Europeans, but rather milky white, lighter than that of all Europeans, and very much like the color of a white horse.

For they have another remarkable property: their bodies are covered all over their bodies, more or less, with a thin, short down of a milky white color, which adds to the whiteness of their skin. Men would probably have had white stubble in their beards if they had not prevented this by their custom of constantly plucking a young beard by the roots.

Their eyebrows are also milky white, like the hair on their heads, and very thin, six or eight inches long, and prone to curling. And, even stranger, their eyelids curve and open in an oblong downward-pointing shape at the corners, and form an arch or crescent-shaped figure, pointing down.

From this, and also from the fact that they see as clearly as on a moonlit night, we called them moon-eyed. For they see poorly in the sun, even on the clearest day; their eyes are weak and watery when the sun shines on them; so they don’t go out during the day unless it’s a cloudy dark day.

But despite the fact that during the day they are lethargic, dull and restless, however, when the moonlit nights come, they revive and become active, run outside the village and in the forest, jump like wild ducks; and run as fast as moonlight, even in the darkness and shadow of the forest, like other Indians by day, being as agile as they are, though not as strong and lustful. 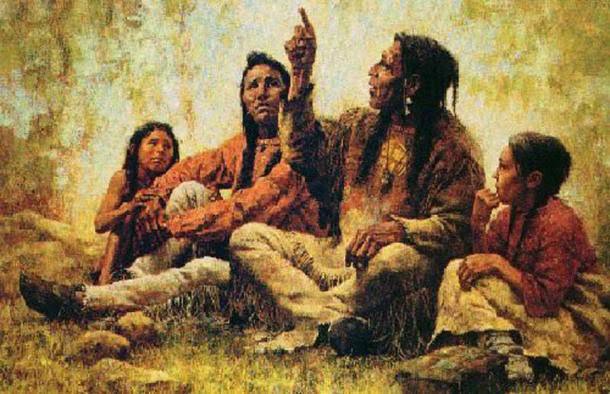 Over time, many other documented evidence of these myths appeared, all of them, as a rule, were attributed to the Cherokee. Ezekiel Sanford in his “History of the United States before the Revolution” and B. R. Carroll in “South Carolina Historical Collections” mention the “moon-eyed people” as a Cherokee tradition.

In 1902, writer James Mooney attempted to link Benjamin Barton’s earlier story to other similar stories he had collected. His book Cherokee Myths revisits the work of another early American historian, John Heywood. The latter wrote in 1823, in his Natural and Aboriginal History of Tennessee, of “the white people who were partly exterminated and partly expelled from Kentucky, and probably also from West Tennessee.”

Haywood collected Cherokee stories, handed down from generation to generation, which described how they met “white people” on the Little Tennessee River. There they discovered fortifications containing “hoes, axes, guns and other metal utensils”. Arriving for the first time in this region, the Cherokee met no other natives.

According to stories, they discovered a series of fortifications that stretched down the Tennessee River to Chickamauga Creek. They also gave the exact location of three such forts. Evidently the invading Cherokees were at war with these white men, pushing them back to the mouth of the Great Chickamauga, where a certain treaty had been made to enable the white men to leave the area in peace. James Mooney also collected two similar independent sources from older Cherokee who speak of people “very small and completely white” who lived north of the Hiwassee River when the Cherokee first arrived in the area. They subsequently fled west.

One of the best sources for this story, however, is the story of early Tennessee governor John Sevier. During his time, many areas of Appalachia were part of the Cherokee people. According to some sources, John Sevier in 1782 visited a unique place in Georgia, “Mount Fort”. There he met the venerable Cherokee Chief Okonostota, who was 90 years old in 1782, and heard from him a unique story that the chief had learned from his ancestors. In this story, “it was said that the fort was built by white people because of the high water.” Okonostota said that these men “crossed the great water and first landed at the mouth of the Alabama River near Mobile.” Could these white people be moon-eyed people?

Another Native American myth is inextricably linked to the story of the moon-eyed people. This also applies to the myth of the Welsh prince Madoc ab Owain Gwynedd, an early medieval maritime explorer. According to numerous myths and legends, the young Welsh prince Madoc, fleeing the internecine struggle at home, set sail to the west and eventually arrived in North America. The estimated year of his arrival on the new earth is 1170, which makes his supposed discovery about 300 years earlier than Christopher Columbus!

The story survived as a vague oral tradition in Wales itself, and also as a myth among the Native American Indians. Many say that the Welsh, who set foot in America, built many stone fortresses similar to those they had at home, and that they fought and intermarried with the natives.

Some of the early stories of Europeans describe tribes of natives who were not like all the other “red people”, they looked like Europeans, had beards, red hair and blue eyes. These accounts also state that such tribes of “Welsh Indians” spoke a language strangely similar to Welsh, and that some explorers were even able to communicate with them in that language. 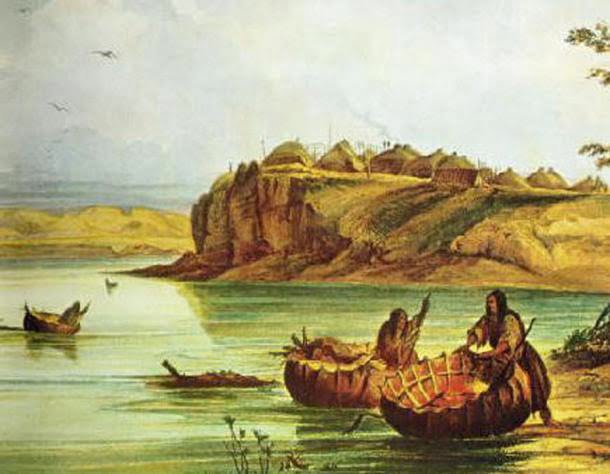 For example, on November 26, 1608, Peter Wynn, a member of Captain Christopher Newport’s exploration party that went to the villages of the Monacons, a native tribe that spoke the Virginian Siouan language, wrote a letter to John Egerton. In a letter, Newport informed Egerton that some members of his party felt that the pronunciation of Monacons was similar to the Welsh spoken by Wynn, and asked Wynn to act as an interpreter.

Tribes such as the Mandan were considered by early explorers to be the offspring of the Welsh who entered into a marriage union with the natives, since the Mandan were very different in appearance and customs from other Indians. 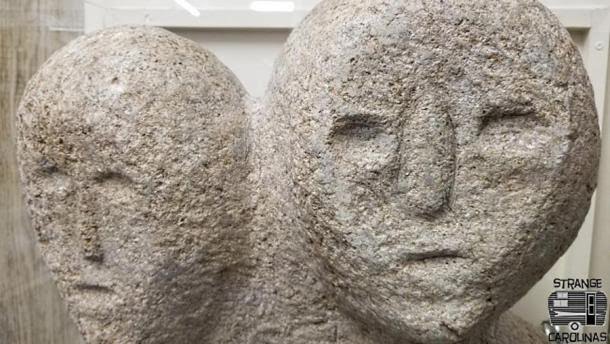 One point of interest that may link the theories of the Welsh medieval explorers and the moon-eyed people is the so-called “Mount Forth”. Located in the state of Georgia, this mountain keeps the remains of a formidable stone fortress on its top. The stone wall, about 270 meters (885 ft) long, recalls the European tradition of building castles and forts. 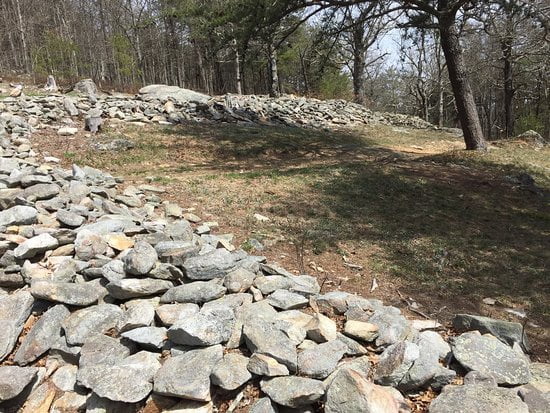 Could it be the remains of Welsh medieval explorers with moon eyes? Local legends claim that this is the case, and tablets at the site confidently state this. In this regard, a unique find was associated with both this and other similar remains of forts in the region. 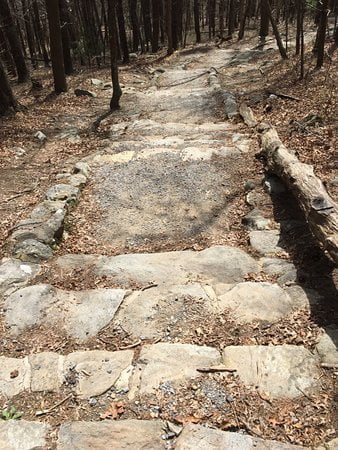 John Sevier from Tennessee also mentioned this discovery. He wrote in a letter to his friend, Major Amos Stoddard, that Cherokee Chief Okontostota, then 90 years old, shared a tradition that the stone remains of forts along the Alabama River, which stretch into Georgia, were “built by a white people called “Welsh” as a defense against the ancestors of the Cherokee, who eventually drove them out of the region.” 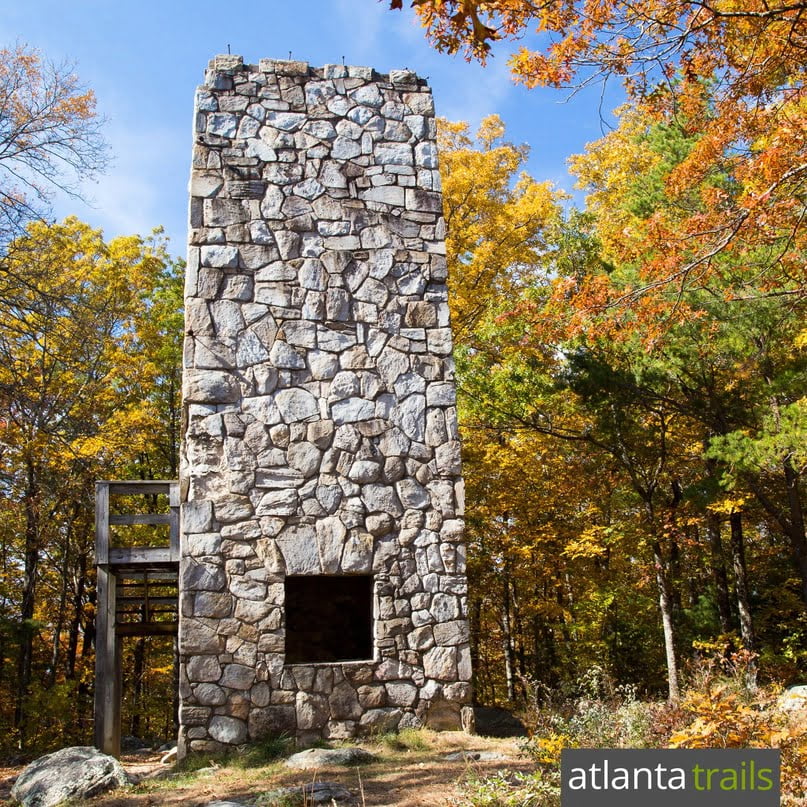 John Sevier further mentions a curious find made in 1799: six skeletons in copper armor, each engraved with the coat of arms of Wales . In this regard, Sevier confidently asserted that Prince Madoc and his Welshmen were the first white people to reach Alabama and Georgia. The same statement was confirmed in 1824 by the famous writer and historian Thomas Hind. In his letter, he wrote of the discovery in 1799 of six soldiers “dug up near Jeffersonville, Indiana, on the Ohio River, wearing badges bearing the Welsh coat of arms.”

Curiously, the legend of the moon-eyed people also existed among the Cherokee of Ohio. Here, some local elders and historians have suggested that the moon-eyed people may be related to the mound builders of the Aden culture dating as early as 500 BC . Much remains a mystery regarding these mound builders in ancient America. Could they be prehistoric stone age white people who crossed ice bridges and settled on this land? 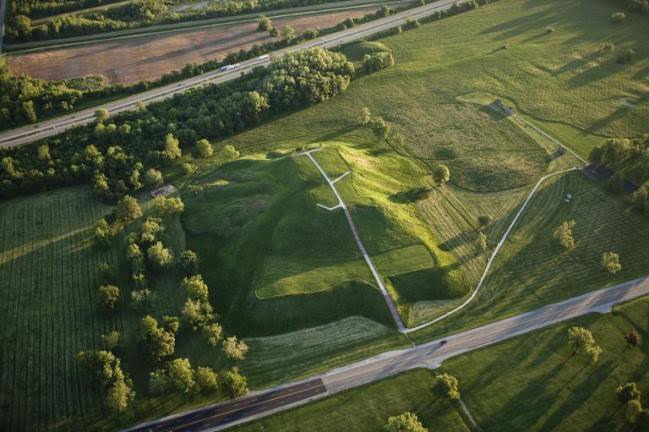 Curious finds were made during the excavation of mounds of this culture. For example, at Creel Mound in West Virginia, the remains of a “very large” skeleton of “once the most powerful man” were found, which measured “six feet, 8 3-4 inches” (205 cm) from head to toe.

Could the moon-eyed people be related to the legends of the prehistoric red-haired and red-bearded giants that left unmistakable footprints in southeastern North America?

The reality of the existence of moon-eyed people is confirmed by many facts, but we still do not fully understand who they were and where they came from.