(ORDO NEWS) — If we turn to the past, we can find many unusual and extraordinary deaths in the annals of history, some of them more famous than others.

It is well known that Attila the Hun, a marauding Mongol warlord, died of a nosebleed, and Adolf Frederick of Sweden died of a stroke following an overly large meal of lobster, caviar, sauerkraut, smoked herring, squash soup, and fourteen wheat burgers. , warm milk and champagne.

Less well-known, but just as unusual, was the death of Klaus Störtebeker, a 14th-century German pirate whose astonishing decapitation and spiked skull still hold a place of honor in the pantheon of German national mythology.

Klaus Störtebecker was born in 1360 in the North German city of Wismar. Little is known about the early life of this elusive brigand, except for an incident in 1380 when two men, one of whom was named Nicolau Störtebecker, were expelled from Wismar after a violent scuffle.

This incident was characteristic of the recalcitrant corsair, who was also famous for his drunken exploits. His middle name, Störtebeker, can be translated from German as “to the bottom of a beaker”, and refers to the pirate’s legendary drinking skills and his ability to finish a 4-liter glass of beer in one gulp.

Störtebeker was also a notorious marauder, and from 1389 led a group of greedy pirates known as the “Brothers Vitalin” or “Brothers Victual” who wreaked havoc on the waves of the Baltic Sea for the next decade. 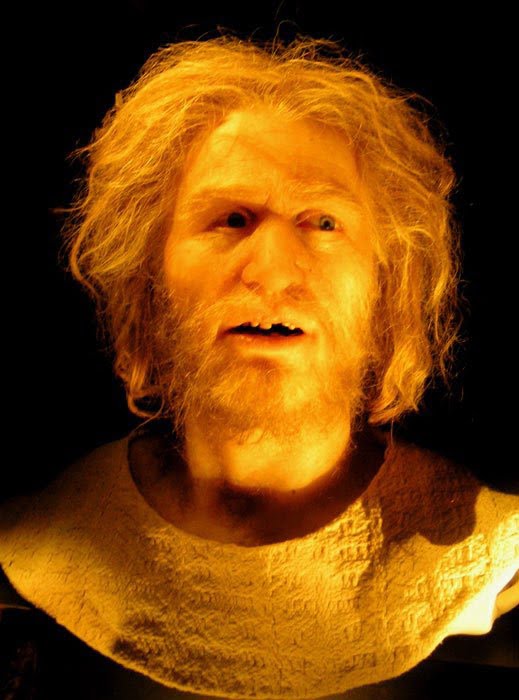 Störtebeker had his first success as the leader of the Victual Brothers, a group of hungry privateers that prowled the Baltic Sea in the 1390s.

The first mention of the “Brothers-victims” refers to 1389, when the city council of Dorpat replied to a letter from Reval, who complained that they had sold the ships “de vitalienbrude”.

Reval’s indignation was probably caused by the fact that the Victualist Brothers were probably already visible on the Baltic Sea at that time and had a dubious reputation as a distrustful professional mercenary army, and a marauding gang of pirates.

In 1390, the Hamburg Finance Chamber reported that a whole armada of ships had been sent to fight the Vitalians.

Störtebeker’s work in the German royal house of Mecklenburg remains the most documented period of his life.

After the death of Valdemar IV Atterdag, King of Denmark from 1321 to 1375, a struggle for the Danish and Swedish throne began between the daughter of the late king, Queen Margarita of Norway, and King Albrecht III of Sweden, who was also the son of the Duke of Mecklenburg, who was in Germany.

Using his seaports at Wismar and Rostock, Albrecht III began hiring privateers for the express purpose of harassing and destroying Danish ships in the Baltic, in the hope that Queen Margaret would retract her claims.

In 1392, during one such recruitment, Störtebeker and his men were hired by the Germans and quickly set to work.

Their first major mission took place in 1394 when they were ordered to supply supplies to besieged Stockholm. For this they were called “victual brothers”, which comes from the Latin word victualia, meaning food or provisions.

A contemporary account by the Franciscan monk Detmar, written in 1395, shows that Störtebeker devastated the Baltic Sea. He reported that by their actions, the Victualist brothers managed to seriously disrupt the work of the oceans and were even guilty of attacks on the allies:

“But, unfortunately, they threatened the whole sea and all the merchants, and plundered both sides, friend and foe, so that the way to Scania was closed for about three years. Because of this, herring became very expensive in these years.”

The blockade of Scania is also mentioned by two more sources from Magdeburg and Limburg, who report an increase in the price of salted herring, an integral part of the diet of the townsfolk.

When in 1395 a peace treaty was concluded between the two warring factions, under which Albrecht was forced to transfer control of Sweden and Denmark to Queen Margaret, nothing much changed.

Stertebeker and his brothers were accustomed to the taste of robbery and robbery, and after leaving the service of the Germans they continued to engage in piracy, instilling fear in all who dared to sail the Baltic Sea.

Margaret ultimately formalized her control of the Danish and Swedish thrones in 1397 with the Kalmar Union, while Stertebeker unleashed pandemonium on the high seas.

At that time, trade in the Baltic Sea was dominated by the Hanseatic League, a trading alliance of North German states that exported an incredible amount of gold and goods from Hamburg, Lübeck and Rostock.

Sturtebeker, sensing an opportunity, established a base on the island of Gotland, turning the largest city, Visby, into a pirate stronghold.

After several years of successful struggle, in 1398 the Teutonic Knights captured the island, and Störtebeker’s robbers were expelled from the Baltic Sea and forced to seek another refuge on the rugged shores of the North Sea.

Having found a common language with the Frisians who inhabited modern Holland, the robbers began to attack the sea routes to England and the English Channel. However, their luck eventually ran out. 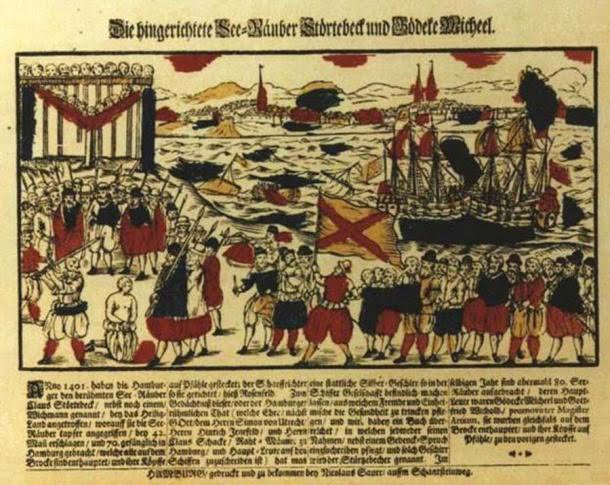 After another 4 years of success, Störtebeker was finally stopped by the Germans of Hamburg and Lübeck, who sent a flotilla of ships under the command of Simon of Utrecht to attack Frisia in 1401.

Störtebeker and his team were captured by the Hamburg company “Englandfarer”, and only his faithful corsair Gödeke Michels managed to escape from their clutches.

They eventually overtook him at Yada, in the Weser Delta, where he was killed a year later in a final battle. Störtebeker was allegedly betrayed by one of his crew members, who allegedly poured molten lead on the chains that controlled the ship’s rudder, as a result of which the ship could not move.

Störtebeker and his crewmates were transported to the island of Heligoland and then to Hamburg on a frigate called the Bunte Kuh or “Motley Cow” to await sentencing.

In desperation, the insidious criminal offered his captors a golden chain that could be wrapped around the entire circumference of Hamburg in exchange for release.

As a result of his raids, Stertebeker really took possession of a huge amount of gold. When he was detained, gold seized from his ship was allegedly used to build the top of St. Catherine’s Cathedral in Hamburg.

However, the Germans were not convinced by his proposal, and they sentenced him, along with 70 crew members, to death by decapitation.

The execution of Klaus Störtebeker, which took place on October 20 on the island of Grasbruck on the Elbe River near Hamburg, was perhaps one of the most bizarre in the pages of history.

Realizing that he was finished, Störtebeker made a kind of deal with the executioner and the city councilors of Hamburg. They agreed that after decapitating his headless body, he would be allowed to pass by other imprisoned free robbers, and they would be released.

When the executioner cut off his head, the body of Klaus Störtebeker stumbled past 11 of his people, and was not allowed to go further until the executioner tripped him.

However, the Germans did not honor their end of the bargain, and the rest of Stertebeker’s marauders were quickly guillotined along with their enigmatic captain,

The legend of the execution of Klaus Störtebeker ended with a funny epilogue. After he dealt with all the prisoners, the members of the city council asked the executioner if his hands were tired.

Jokingly, he replied that his hands were fine and that he even had the strength to behead all the members of the council. The joke failed, and the executioner was also sentenced to death, he was executed by the youngest member of the city council. 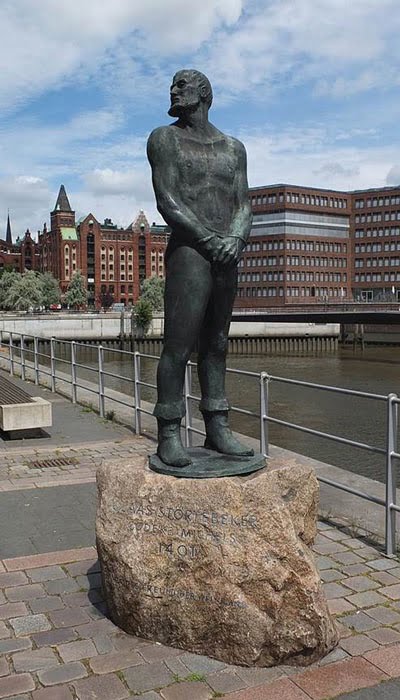 Hundreds of years later, in 1878, at the very spot where Störtebeker met his end, in Grasbruck, a skull was found with a spike driven into it.

It was believed to have belonged to Störtebeker, whose head was allegedly impaled on a spike, and in 1922 it was exhibited at the Hamburg History Museum. In 2008, in an attempt to definitively link the skull to Störtebeker, DNA samples were taken from the skull and possible surviving descendants for comparison.

Although the results have been inconclusive, the skull is still attributed to Störtebeker and is proudly displayed in the Hamburg History Museum, along with a digital reconstruction of the hijacker’s face.

Klaus Störtebecker remains a well-known hero of German folklore to this day and is celebrated for his Robin Hood approach to banditry. Many other versions of his legend mention that he also gave his spoils to the poor, and his mercenaries were often given the epithet “lovers”, which meant that they shared the booty equally.

In Germany, Klaus Störtebecker was reborn at different periods of its history – in the socialist period after the First World War, in the era of Nazism, in the communist era, and even more recently, at the turn of the century.

In 2008, he became the star of the national celebration of German reunification, participating in a theater production called Störtebeker, the North German Pirate.

Since 1959, starting in communist East Germany, Störtebeker has been the subject of numerous performances at the annual Störtebeker Festival held on the island of Rügen, which was attended by 378,000 people in 2007.

Its revival in the late 2000s was in response to Germany’s deepening economic crisis and growing sense of social inequality, as Germans were shaken by the news that they were the only European country where real wages fell from 2000 to 2008.

This was immortalized in the 2008 feature film Headless 13 Steps, which dramatized his adventurous adventures. Ronald Serfeld, who played the role of Störtebeker, summed up the feelings of the Germans towards the pirate: “He kills people, but he has a very, very big heart.”

Despite his criminal tendencies, Störtebecker remains an icon of German popular culture and is remembered as a statue on the HafenCity memorial as “friend of God, enemy of peace”.

He was so admired that a few overzealous Störtebeker enthusiasts went too far in their veneration of the old pirate when the skull was stolen in 2010, but fortunately recovered the following year.

In a story as absurd as that of Klaus Störtebeker, the inevitable confusion of fact and fiction cannot be avoided.

Although the myth of Störtebeker was based on a real historical figure, George Rohman argues that the surreal execution of Klaus Störtebeker is a fabrication. He states that the Victualist Brethren continued to exist after 1401, mentioning them in 1436 and in Lübeck in the 1460s.

This is because perhaps the “vitual brothers” were a more general term for privateers in northern Europe and were not exclusively associated with Sturtebeker and his crew.

For example, a denunciation letter from Count Albrecht of Holland, in which he asks the “vitalian bretheren” to help him in the fight against his enemies, the Frisians, shows that it was not only Mecklenburg who hired the services of this group.

In addition, he claims that the historical figure Störtebeker relied on was alive until at least 1413, or until 1436, according to the tax records.

However, for the Germans, the story of Klaus Störtebeker is less connected with the fantastic circumstances of his death and more with his position as a defender of the poor and a destroyer of authority.

The appeal of Störtebeker’s story continues to demonstrate the dedication of ordinary Germans in the fight against inequality and the unlikely power of the old pirate tale on the national consciousness.