This military ammunition was surprisingly effective, considering that it was created from ordinary coconut fibers and nothing else.

After first encounters with Westerners, Karibati society has changed considerably, but their armor provides an interesting glimpse into what life in Kiribati used to be like before.

The country of the Republic of Kiribati was once known as Ai-Kiribati. It is a nation of thirty-three coral atolls that cover an area of ​​3.5 million square kilometers.

The islands are located in Micronesia, a region of the Western Pacific Ocean.

The islands were settled by Austronesian peoples speaking the same Oceanic language sometime between 3000 BC and 1300 AD.

The islands are distinguished not by one people, but by a high level of cultural diversity. Early visitors from Samoa, Tonga and Fiji brought in Polynesian and Melanesian cultural aspects.

The fact that the islands were so scattered and so susceptible to the arrival and settlement of new visitors meant that Kiribati had to learn not only to defend itself, but also to resolve land disputes.

That is why the armor of the indigenous inhabitants of Kiribati appeared.

The people of Kiribati had limited resources and therefore learned how to create impressive objects from relatively simple materials. Kiribati armor was designed to resist swords, spears, and shark-toothed daggers often carried by warriors. The costume was a set of overalls and sleeves woven from coconut fiber.

Over all this was worn a coconut cuirass. This cuirass was distinguished by the fact that it was often equipped with a high back to protect against blows to the back.

Over the cuirass, the warriors wore thick belts, also made from woven coconut fiber, and sometimes from dried stingray skin.

The purpose of the belt was to provide additional protection for vital organs. The cuirass was usually decorated with human hair, feathers or shells – in general, everything that came to hand.

On their hands, warriors sometimes wore intimidating gloves made of coconut fiber with shark-tooth inlays at each knuckle.

The fibrous material helped the warriors retain most of their agility, while the teeth gave the warrior a fearsome blow.

They wore helmets to protect their heads. They were made from the skin of porcupine fish, which was left in the sun to dry and harden.

As with helmets from other parts of the world, there was a cap underneath the Kiribati helmet. The hat was made from even more coconut fiber or woven pandanus leaves. 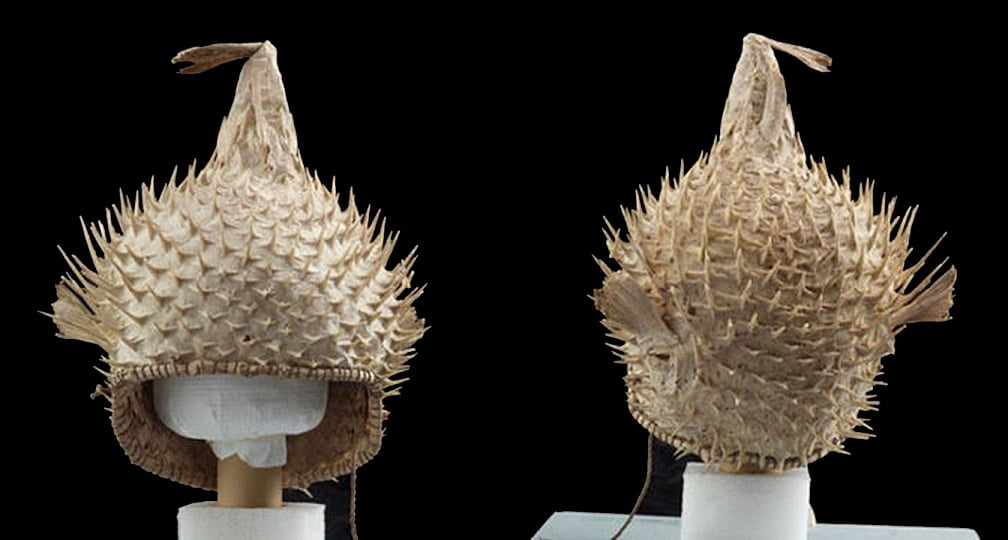 The early history of Kiribati was transmitted orally, which means that not many records have survived.

Unfortunately, this means we have no way of knowing how long the Kiribati custom of wearing coconut armor has been around.

Armor was used when land disputes or demands for retribution arose between individuals or groups. Kiribati’s approach to war was radically different from that of most people.

The Kiribati were a people accustomed to dealing with limited resources, so wastefulness was unacceptable. To deprive a person of life meant to waste a valuable resource.

Thus, the purpose of the battle in Kiribati was not to kill, but only to wound. If someone was killed, then from the opposite side they had to make material compensation. Usually it was a piece of land.

The fight on Kiribati was a kind of group duel. The outcome of the battle mainly came down to the individual challenges that the warriors threw.

The purpose of these battles was only to injure the enemy, not to kill.

Kiribati has been isolated from the West for many centuries. Then, in 1606, Pedro Fernández de Queiroz crossed the islands.

British explorers John Byron, Thomas Gilbert and John Marshall then passed through the chain of islands between 1764 and 1788.

Around this time, Kiribati armor first began to appear in Western collections. However, shortly thereafter, the armor began to disappear.

It is believed that this was due to the French and British missionaries, the great destroyers of many local cultures, who arrived on the island between 1888 and 1892.

These colonizing missionaries tried to “modernize and appease” the islanders by introducing new laws. The old ways of resolving disputes are gone. Kiribati produced only what was needed.

Once they no longer needed the armor, they stopped making it.

They also didn’t believe in keeping things they didn’t need, so every suit of armor in existence was quickly distributed to tourists, diplomats, explorers, and whalers.

There is currently far more Kiribati armor in foreign hands than locals. The only pieces of armor on the island are believed to be at Te Umwanibong, the Kiribati Museum and Cultural Center on Tarawa Atoll.

When the Pacific Presence Project, based at the Cambridge University Museum of Archeology and Anthropology, decided to recreate the armor, they had to bring in artists from New Zealand, since Kiribati themselves had long since lost the know-how.

It would be sad to think that the people of Kiribati lost a lot of their culture due to colonization, but fortunately, this is not the case.

Kiribati seceded from the British Empire in 1979 and since then the traditional culture of Kiribati has experienced a revival.