(ORDO NEWS) — What is the geography of the genealogical tree of people? The study of Italian scientists on the basis of cave finds, if not turned over, then shifted the understanding of human history.

Now there are 7 continents on Earth: North and South America, Antarctica, Australia, Europe, Asia and …

Africa has long been considered the progenitor of mankind, but the genetic analysis of the found bone fragments from ancient caves does not unequivocally interpret the migration of ancestors.

Often the problem arises of where and where the ancients moved from. Often the remains found lead researchers to speak of the East Asian roots of today’s population of the earth, rather than of a European/Western origin.

This, in general, is evidence of a more intricate migration of the human species. Italian scientists from the Universities of Padova and Bologna have proposed a new look at this issue. 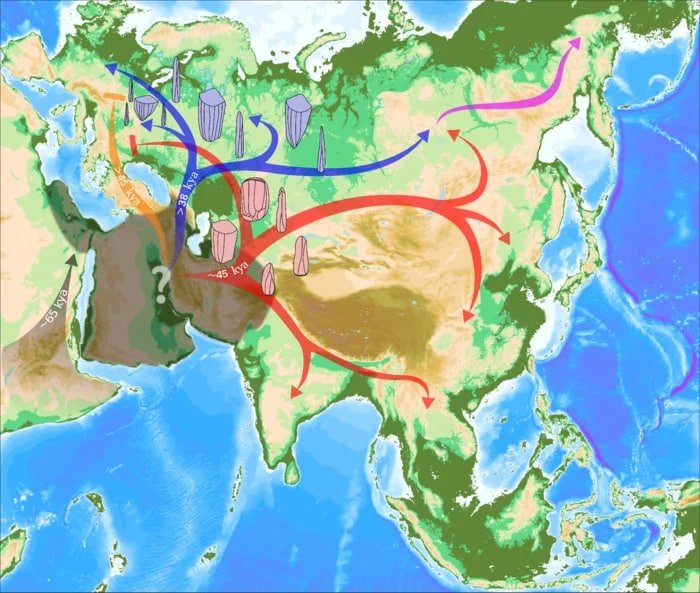 Human bones and stone tools sifted from the deposits of the Bacho Kiro cave in central Bulgaria are the evidence that archaeologists dream of.

The remains are about 45,000 years old, officially making them the oldest Upper Paleolithic hominin bones. Based on archaeological evidence, scientists say the bones were left over from a larger community during a 15,000-year hiatus in travel to the east of the Earth.

New genetic evidence, according to Italian authors, allows us to speak more about the discontinuous nature of ancestral migration.

Those of the human ancestors who went to Asia prospered. Traces of their ancestry have survived to this day.

However, something happened in the west that temporarily made it difficult to study the movement of people in Europe.

A second study, conducted last year on the remains of a woman from the Czech Republic, along with new Italian, provides a clue.

Although radiocarbon dating has yet to confirm the woman’s age at death, changes in her genes hint that she died before 45,000 years ago.

Important: the ancestors of the Paleolithic woman were not closely related to either modern Europeans or Asians. Whatever happened to her and her relatives, their history was not long.

Where exactly this temporary center of mankind could be found and what prompted its population to set off again and again, future archaeologists have to find out.

Even 2,000,000 years ago, human ancestors were apex predators and carnivorous

Even 2,000,000 years ago, human ancestors were apex predators and carnivorous