(ORDO NEWS) — The case of the alien abduction of the Argentine truck driver Dionisio Llanca left a significant mark on the history of UFOs.

Nearly 50 years ago, he experienced a life-changing event involving a flying saucer and three Scandinavian-looking aliens who spoke in a high pitched voice and took a blood sample from him. After the incident, he calmly arrived at the hospital in Bahia Blanca, but could not learn much due to partial memory loss.

On October 27, 1973, Dionisio Llanca was vacationing at his uncle Enrique Ruiz’s house on Chubut Street, just a few minutes from the center of Bahia Blanca, Argentina. Since he had to drive for a long time at night, he took a nap during the day. He woke up in the evening at 6 pm local time and watched TV until 10 pm.

He left the house at half past one on Sunday, October 28, 1973, after saying goodbye to his uncle, and got into his Dodge 600 truck loaded with building materials to be transported to the city of Rio Gallegos.

For Dionisio, it was an ordinary two-day trip to the south of the country. He had 12 years of driving experience, which allowed him to comply with the conditions even in the dark.

After a 45 minute drive, he stopped at an Esso gas station on Via Dona Bosco to fill up. There, he noticed that one of the tires was a little short of gas, but he ignored it and decided to check when he got to the city of Medanos to buy himself some time.

While driving on Route 3, about 11 miles (19 kilometers) from the city of Bahia Blanca, he realized that the tire was rapidly losing air, so he urgently had to stop to replace it. He regretted not changing it at the Esso gas station where he stopped 15 minutes ago to buy some gasoline.

At about 1:15 a.m., he pulled up on a dark and deserted roadside on a cold night. He began to get tools, wrenches, a jack and change the tire by himself, and no one could help him. The road was completely deserted in a wooded area surrounded by total darkness. 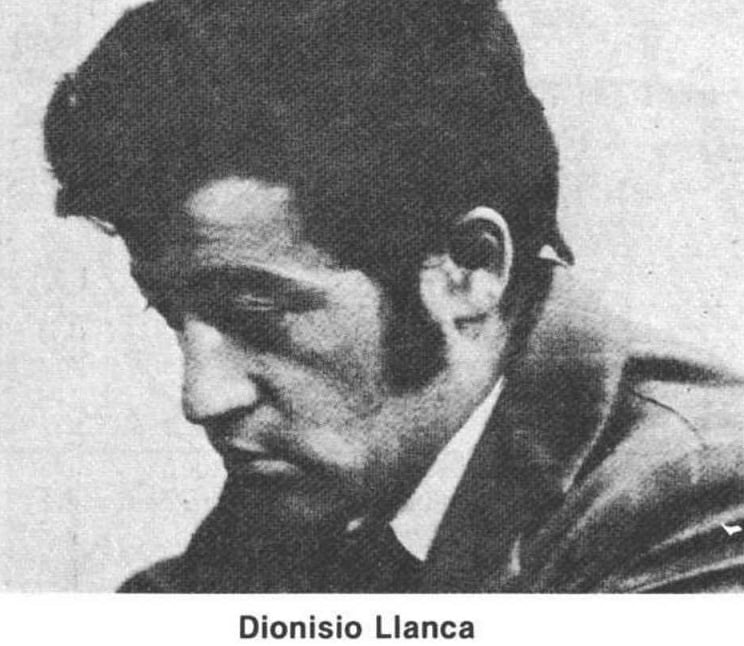 While changing a tire, he noticed that the road was illuminated by an intense yellowish glow about a mile (2 kilometers) away.

Because of the color, he thought that it might be the headlights of some car (“Peugeot,” he said) and continued to work, not paying any more attention.

As he knelt down to change a tire, suddenly behind him, over the tops of the trees, a light appeared that became so bright that it illuminated the entire area and changed color to a bluish, similar to electric arc welding.

“A few seconds passed, and I turned my shoulder to the light, but it became so bright that it covered the entire area.

Now the light has changed to a bluish color, similar to electric arc welding.

I tried to get up, but I couldn’t get up, I didn’t have the strength, and the strange thing is that my legs didn’t obey.

I was on my knees. I wanted to stand up and look towards the forest that grew along one side of the road,” said Dionisio.

Glancing over his right shoulder, he realized something unexpected: Behind him was a huge disc-shaped object suspended about seven meters above the ground, and three standing humanoid beings were looking at him. He was completely paralyzed and could not even speak.

According to Dionisio, they stood and looked at him for about five minutes. Then one of the humanoids grabbed him from behind, holding him by the collar, and lifted him firmly, but not aggressively.

He tried to speak, but his voice wouldn’t come out. While this humanoid stopped him, another placed a razor-like device at the base of the index finger of Dionisio’s left hand and drew blood from him. He believed he passed out shortly after seeing the drops of blood on his finger.

Aliens have been described as beings of the Nordic type. They were two men and one woman, whom he recognized by the shape of her breasts and long blond hair that reached mid-shoulders. The men were also blond, but with shorter hair.

They were about the same height, 4 to 5 feet (1.70 to 75 centimeters), and wore very tight one-piece gray uniforms, orange boots, and long orange gloves that reached half way down their arms. They had no belts, no weapons, no helmets, or anything else.

Their facial features were similar to those of humans, except for high foreheads and elongated eyes. They spoke to each other in a strange language that sounded like a badly tuned radio, screeching and buzzing. 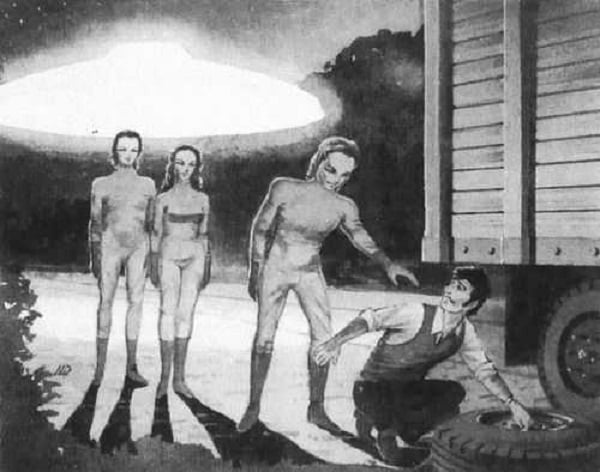 Dionisio could not remember when he woke up, but it is believed that it was between two or three on the same Sunday morning.

When he opened his eyes, he found himself between cars in the courtyard of the rural settlement of Sociedad de Bahia Blanca, about 9 kilometers from the place where the meeting with aliens took place.

He was in a state of amnesia as he couldn’t even remember his name, episode, truck, or his house. He started down the road and lost consciousness.

When he woke up again, he continued on Route 3 and came to an intersection with Route 35. One driver spotted him and took him to the police station, from where he was later transferred to a hospital in Bahia Blanca.

It is still a mystery what happened between the moment of the meeting and the moment when he woke up in the “Rural Society of Bahia Blanca”, about 9 kilometers away, and when Dr. Ricardo Smirnoff treated him in a Spanish hospital.

Dr. Altoperro stated that this was a curious case, since Llanca, a young man of about 25 or 26 years old, was in a state of complete amnesia.

In the hospital, he still couldn’t remember anything about his past. He didn’t know who he was, where he was born, or even who his parents were.

He had absolutely no memory of his past. He constantly cried and asked what city he was in. When his head or hands were touched, he instinctively recoiled as if it hurt him.

He had a severe headache in the region of the right parietotemporal lobe. The police were notified and he was later transferred to the municipal hospital.

Dr. Ricardo Smirnoff treated him in a Spanish hospital. He said: “Subject has no visible injuries, but refuses to touch his head as if he has a deep illness there. There is also a barely noticeable abrasion on his left eyelid.”

On October 30, at 10:00 p.m., when he awoke in his bed at Bahia Blanca Municipal Hospital, his memory returned and he recalled the experience in detail, up to the point where he lost consciousness. His clothes were intact.

He felt the urge to smoke and find out what time it was. His watch, lighter and cigarettes were gone, but he still had his 150,000 pesos.

He asked for his truck, he was more concerned about his truck than about the UFO and its passengers. He was told that the police found him parked on the side of the road in Villa Bordeu, about 18 kilometers from the city of Bahia Blanca.

Fabio Zerp, Uruguayan UFO researcher living in Argentina, investigated the Dionisio case and published his book Underground Reino. After a few days and intense investigations, some information came up, but not much, so they decided to do hypnosis sessions as well.

Dionisio went through three hypnosis sessions, which were done using pentothal. With the exception of the first, in every session Dionisio seemed to repeat the same thing.

On November 5, 1973, Dionisio was hypnotized, allowing him to recount events he could not remember while on board the spacecraft for over an hour. He explained during the hypnosis that when they got to the truck, they took a biopsy.

A small piece of skin tissue was removed from his left index finger using a razor-like device. Then a yellowish beam of light came out of the ship and led him into the oval interior of the ship.

Once inside, he watched as the woman handled a number of instruments, which he identified as medical and surgical equipment, possibly preparing to examine him.

One of the men, whom Dionisio thought was the pilot, seemed to be sitting at the helm of the ship, holding what looked like a joystick in his right hand.

Another humanoid watched the starry sky through an equally large glass, an image that was repeated on a series of color monitors to Dionisio’s left.

In addition, he explained that the aliens were using some kind of translation device to communicate with him in Spanish. At some point, several hoses and cables were ejected from the ship. The hoses plunged into a small stream, and the cables came into contact with a high-voltage tower located nearby.

He saw a woman, probably a nurse, who made an incision in his right parietal bone. Then, inadvertently, she hit him on the left eyebrow, causing a hematoma (or bruise), which was later examined and treated by human doctors.

Having finished examining his head, the aliens proceeded to anesthetize his wound. At this point, he was released from the spacecraft in a complete unconsciousness and was later found wandering the streets in a state of amnesia, and his next memory of the incident was when he woke up in Bahia Blanca Municipal Hospital.

On the other hand, the truck was found at the spot where Dionisio claimed to have parked it. A few meters away, it was discovered that a high-voltage tower was damaged.

After consulting with the company that supplies electricity to the city, a team led by Fabio Zerpa confirmed that on Sunday, October 28, 1973, between 2:00 and 3:00 am, there was an unusual increase in electricity consumption, consistent with Dionisio Llanchi’s report.

As the days passed, the case gained wide notoriety in the area. People and the media began to annoy Dionisio to find out more about this incident. He subsequently disappeared from the media and also moved away from his family and lived an incognito life.

It wasn’t until 2013 that local journalist Sergio Prieta was able to get in touch with him and remember much better what had happened some time before.

He managed to get in touch with Dionisio and headline his note with a rather shocking statement: “Si me volviera a pasar, no se lo contaría a nadie (If this happened to me again, I would not tell anyone)”.

With these simple words, Dionisio expressed himself in the face of what happened and all that he had to go through, talking about his traumatic experience many years ago, which then was not so often heard.

In addition, in an interview, the trucker commented that he was defamed and used. Although many of the anecdotes told in a state of complete sincerity matched what happened that morning, Dionisio’s story was discarded ten years after the event.

For his part, Prieta, who once again heard the amazing story that continues to influence the world of ufology today, commented that “today people are more inclined to recognize this as a possibility as governments have begun to open declassified files.”

The story was finally published in La Nueva Provincia on December 8, 2013. It was translated into several languages ​​because the impact and consequences were so great that the international media began to compare the versions that took place in Argentina with very similar events in other countries.