(ORDO NEWS) — The Basilica Cistern, one of Istanbul’s magnificent ancient structures, has been restored. In addition to being the greatest work of the Roman period, the cistern is the center of interesting lore.

The two heads of Medusa, used as supports under two columns at the northwest end of the cistern, are thought to be the reason the cistern is mentioned in strange legends, besides being the greatest work of the Roman period.

The Basilica Cistern is located southwest of Hagia Sophia. This large underground reservoir was built for Justinian I, the Byzantine emperor (527-565), and is popularly known as the “Yerebatan cistern” because of the marble columns installed in it. It is also known as the Basilica Cistern, as the site of the cistern used to be a basilica.

The entrance and exit parts of the Basilica Cistern, which had not undergone large-scale restoration work for 1500 years, were landscaped.

Due to the large number of people wishing to visit the cistern and the narrowness of the entrance area, visitors formed long queues at the gate.

During the restoration, the entrance area was covered with a glass cornice and a waiting area was made. Necessary changes to the plan were made to the outlet of the cistern, and a suitable and usable area for the building was created.

Most of the columns, most of which are believed to have been assembled from ancient structures and carved from various types of marble, consist of one part, and one of them consists of two parts. The heads of these columns have different features in parts. 98 of them reflect the Corinthian style, and part – Dorian. 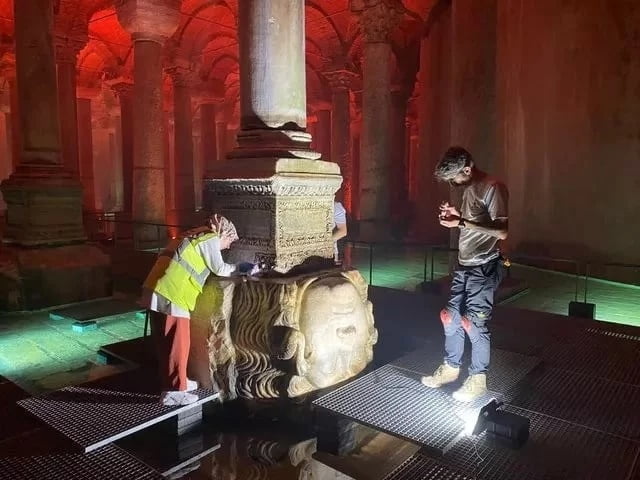 The two heads of Medusa, used as supports under the two columns at the northwest end of the cistern, are thought to be the reason for the strange rumors about the cistern, other than that it is a great work of the Roman period.

The fact that the structure from which the Medusa heads were taken is unknown is a very remarkable detail.

Researchers often believe that it was brought to be used as pillar supports during the construction of the cistern. However, this did not prevent the emergence of myths about the heads of Medusa.

During the examination of the heads of Medusa in the cistern of the Basilica, some of the documents mentioned in Kara Kapli, a diary kept by Sultan Abdulhamit II, were found. These documents in Kara Kapli led to the fact that the story of Medusa took on a completely different meaning. 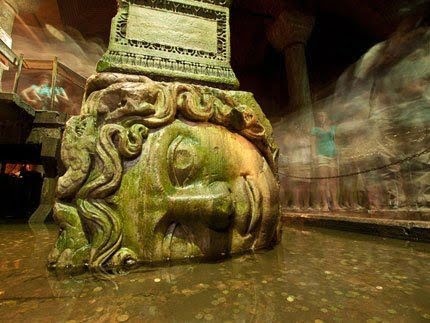 This topic attracts the attention of the Sultan, and he agrees to meet with one of the members of the delegation. The chosen representative tells the Sultan that the treasure in the cistern of the Basilica is not a material thing, but a corpse.

The delegation, which offered a lot in exchange for this corpse and the sarcophagus (coffin) in which it was found, could not get what they wanted. According to what is mentioned in Kara Kapli, this delegation is a member of a pagan sect.

After Fatih Sultan Mehmet, Abdulhamit Khan took a keen interest in the Medusa sarcophagus. When a delegation was sent to Abdulhamit Khan several times to discuss this issue, the Sultan’s interest in Medusa increased, and he asked for a study on this topic.

Abdulhamit Khan, who has decided to remove the sarcophagus in accordance with the information obtained from research and delegations, and the people he has appointed in this regard, finds the sarcophagus in one of the corridors of the Basilica Cistern .

Inside the sarcophagus is the decayed mummy of a terrifying creature. The head of this creature is similar to a human, but with the curves of the whole body, it resembles a giant snake.

By order of the Sultan, this sarcophagus was taken under guard. It was decided that the sarcophagus, which at first they want to hide from prying eyes, will later be put on public display, provided that its cover is not removed.

One day, a child entered one of the corridors , saw a corpse inside and told the residents of Istanbul: “I saw Shahmeran!” This sarcophagus, weighing a ton , is brought to light with great difficulty, taken out into the courtyard of the Fatih Mosque and shown to the public for a short time .

Although many foreigners are known to hunt for the sarcophagus of Medusa, it is also said that delegations visiting the Sultan performed rituals around this sarcophagus for many years . I wonder if these delegations have anything to do with the confiscation of newspapers and the cover-up of this event.

The legend of Shahmeran: The legend tells of the great love of Shahmeran, half-snake -half-human , for Tahmasp. He mentions that Shahmeran is hidden in a cave, that she knows the secret of the world, and that whoever eats her flesh will be healed.

Those who are looking for Shahmeran for the health of the sick Sultan find him thanks to Tahmasp, and at the end of the legend, the vizier kills Shahmeran. Although it is unknown what happened to Shahmeran’s body after his death, Tahmasp may have hidden Shahmeran’s body in a sarcophagus .

We may never know if Shakhmeran and Meduza are the same woman. However, these legends, which took shape over the centuries, will continue to circulate even centuries later.

Number of ancient Martian lakes was underestimated by scientists

Number of ancient Martian lakes was underestimated by scientists