(ORDO NEWS) — An active sunspot originates on the southeastern limb of the Sun. It announced itself on May 3 (1325 UT) with an X1.1 class solar flare. NASA’s Solar Dynamics Observatory (SDO) recorded the flare in the extreme ultraviolet range.

Radiation from the flare ionized Earth’s upper atmosphere, causing a strong shortwave radio outage over the Atlantic Ocean and Europe: map. Signals below 30 MHz were attenuated for over an hour. 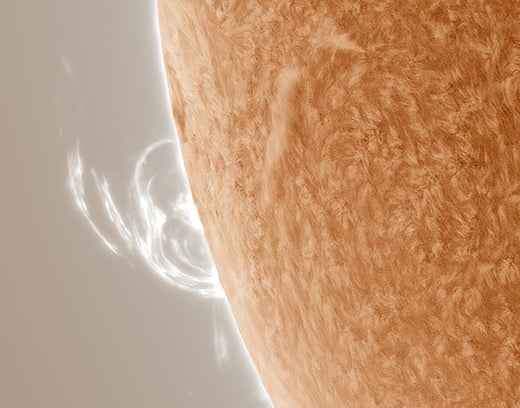 In Argentina, photographer Eduardo Schaberger Pupo had already pointed his solar telescope at the sun when the flare occurred. “At that very moment, I was trying to photograph the new sunspot AR3004,” Pupo says.

“Suddenly, I got an X flare warning on my smartphone. I quickly switched to the southeast limb of the Sun, where the debris thrown out by the flare was still very bright.”

The sunspot responsible for the flare is visible for less than a day. It has already released 9+ solar flares (over six Cs, two Ms and one X). Future flares will become increasingly geo-efficient as the active region rotates toward Earth.

What is the Sun of the chemical composition of our star

What is the Sun of the chemical composition of our star