(ORDO NEWS) — Bivalves may have lost their heads in the process of evolution, but sometimes they are still capable of quite complex behavior.

For example, oyster larvae are able to purposefully move towards the sound that occurs when a snapping shrimp uses its special claw.

The seas and oceans are not such a quiet place as it might seem: the water there is permeated with different sounds, many of which are actively used by living beings.

The history of their study dates back to the years of World War II, when an American submarine detected some mysterious clicking with the help of sonar.

At first, the military suspected enemy noise generators, then the rolling of pebbles and even the clicking of shipworm doors. These are unusual bivalve mollusks that, with the help of their small shells, “gnaw” passages in wood.

And the real source of the noise turned out to be snapping shrimp, also known as pistol shrimp and click shrimp.

They use one of their claws for this, which is much larger than the other. When it closes quickly, a small volume of water heats up to about 5000 degrees, huge pressure is created, and even light is released.

The resulting sound can be very loud – up to 210 decibels, which is comparable in volume to a rock concert. To the ear, this clicking sound is similar to what is emitted by oil heated in a frying pan. All such “special effects” are needed by this crustacean in order to stun its victims.

Scientists from the University of Adelaide (Australia) gave oyster larvae to listen to a recording of clicking performed by shrimp and noted with considerable surprise that they were swimming in the direction of the sound.

There was no such reaction of the mollusks to the recording of the noise of the motor or the movement of the ships. 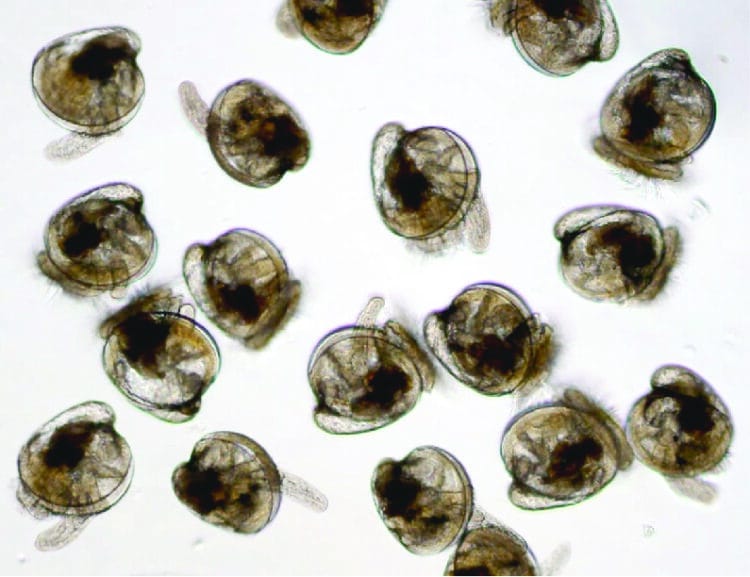 Small oysters (as, indeed, adults) are deprived of hearing organs, but somehow they did not need it to respond to sound.

Oyster larvae move with the help of cilia, using them like oars: thanks to them, mollusks are able not only to move up and down, but also to maneuver left and right.

Adult oysters, like many other bivalves, live on the bottom, do not move, and feed on what they can filter out from the surrounding water. However, they begin their lives as planktonic larvae, which soar rather passively in the water column.

From the new publication it follows that oyster larvae are better than previously thought in controlling their own destiny, because they can purposefully move depending on environmental conditions, in this case, to the sound.

It is not entirely clear why oyster larvae have this ability. Scientists are inclined to believe that navigation by sound probably helps them settle in more favorable habitats in the short period of time when they remain mobile. Moreover, the “noisy” snapping shrimp live mainly in healthy coral reef ecosystems.

Scientists figure out how a 100-million-year-old shrimp reproduced

Scientists figure out how a 100-million-year-old shrimp reproduced