(ORDO NEWS) — Researchers are arguing about perhaps the most mysterious people from the Bible: the descendants of angels, giants almost several kilometers tall. Oddly enough, they may have real prototypes.

One of the most mysterious biblical books is Genesis with a description of the creation of the world, the life of the first generations of people and the Flood. There are a lot of unknowns.

So, in the sixth chapter it says: “At that time there were giants on earth, especially from the time when the sons of God began to enter into the daughters of men and they began to give birth to them: these are strong, glorious people of old.”

In the Hebrew original, the Nephilim. Which, according to one version, means “fallen”. This word appears several times in the Bible.

According to Job’s prophecies, these were the sons of the true God. And the book of Enoch calls them the children of angels and people several kilometers tall. In other places they are either descendants of Seth, the third son of Adam and Eve, or fallen spirits.

Uncertainty has created a lot of controversy. Theologians, Christian and Jewish, argued about the mysterious people as early as the first century of our era.

They are dealing with this problem now. In recent decades, archaeologists have increasingly found confirmation of certain biblical events. And the famous characters of the sacred history, according to them, have prototypes.

We also thought about the Nephilim. American archaeologists and theologians are trying to figure out who they really were. There are several clues.

“The Book of Enoch, the most significant Old Testament apocrypha, claims that the Nephilim descended from heaven.

And Mount Hermon is also mentioned there, which is translated from Hebrew as “exile.” That is, they lived there,” explains American researcher Rudy Landa.

This mountain range is located on the territory of modern Israel, Libya and Syria. And in front of it stretches the plateau of the Golan. Both toponyms appear frequently in the Bible.

Due to the conflict between Tel Aviv and Damascus, getting there is not easy. Nevertheless, archaeologists have found several ancient objects there. The most interesting is Gilgal-Rephaim, or “Wheel of Spirits”. 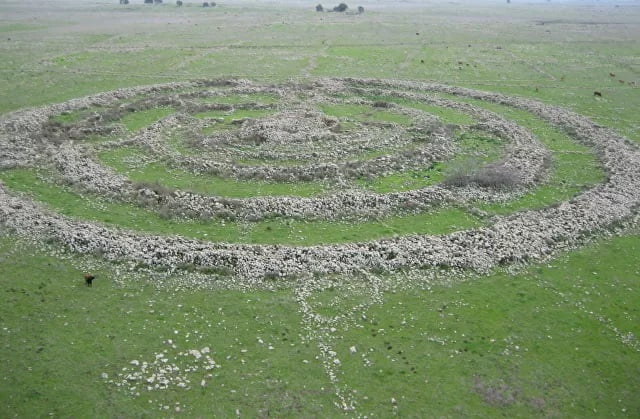 This is a large-scale complex of hundreds of dolmens – burial structures. The central part consists of 42 thousand boulders laid out in circles with a diameter of up to one and a half hundred meters.

In one of the chambers, scientists found gold jewelry made five and a half to six thousand years ago. And it is not known who built it all.

The Book of Exodus reports that King Og ruled here, whose bed was nine cubits in length (four and a half meters). This, according to Landa, is an allusion to his belonging to the Nephilim.

“According to one version, such an impressive crypt in Gilgal Refaim was intended for him,” the researcher points out.

Scripture says very little about God. Nothing is known about his kingdom. And the people are called Nephilim or Rephaim (in Hebrew “big ones”).

“Bible scholars in the 19th century understood this word not as something large in size, but as something majestic, large-scale, significant.

This means that “rephaim” and “nephilim” are the self-names of the people. Like, look how powerful we are,” — argues the American historian Tom Meir.

So what is this tribe? The answer, according to the scientist, is in the Bible. It states that the giants are the descendants of Seth.

“That is, they were tribal clans. At some point they mixed with the line of Cain,” he explains. “Hence the legend of the giants.”

The descendants of the third son of Adam and Eve, according to legend, were the Amorites, a nomadic Semitic tribe that lived in Western Asia four to five thousand years ago.

They created several states, including in Babylon. At the peak of their power, the lands covered modern Syria, Jordan, Iraq, Israel and Lebanon. The Amorites actively built.

“They, like the Nephilim, the chronicles call the sons of God. This is a common name for the Middle Eastern peoples of that era, whose rulers were called gods,” adds Meyer.

Therefore, it is quite possible that the legendary giants had a very real prototype. True, the arguments of armchair scientists have not yet been confirmed by archaeologists.