Two immense swarms of sunspots have popped into view on the surface of the sun, hinting at the increased possibilities of vivid auroras and potentially damaging solar flares over the months to come. Some of the sunspots are so gigantic that they could swallow Earth whole.

Known as “active regions” 2993 and 2994 (AR2993 and AR2994), the new sunspot groups seem to be followed by a third sunspot group still hidden behind the sun’s northeastern limb (or apparent edge) that appears to have caused a powerful solar flare that missed the Earth a few days ago.

Each swarm consists of several sunspots, and covers an area of hundreds of millions of square miles much larger than Earth’s diameter. They’re caused by magnetic disruptions of the visible photosphere of the sun, which exposes the relatively cooler layers underneath.

The sun’s magnetic entanglements and disentanglement happen in 11-year cycles, with each solar cycle having phases of low and high activity.

Solar activity cycles have been numbered since 1775, when extensive recording of sunspot activity began. We are currently in Solar Cycle 25, which has yet to reach its peak, suggesting there will be even more sunspot activity to come.

“I’m sure we shall see larger [active regions] over the next few years,” solar physicist Dean Pesnell of NASA‘s Goddard Space Flight Center told Live Science in an email. “Active regions 2993 and 2994 are middling in size and don’t represent the best that Solar Cycle 25 can produce.”

Pesnell said the current cycle is expected to reach its maximum activity in late 2024 or early 2025. Energy from the active regions can be released as radiation (solar flares) and coronal mass ejections (CMEs), which are super-hot balls of plasma.

Such solar flares and CMEs can create beautiful auroras  but they can also present a danger to power grids, satellites, communications networks, and potentially even to space travelers beyond the protection of the Earth’s magnetic field. 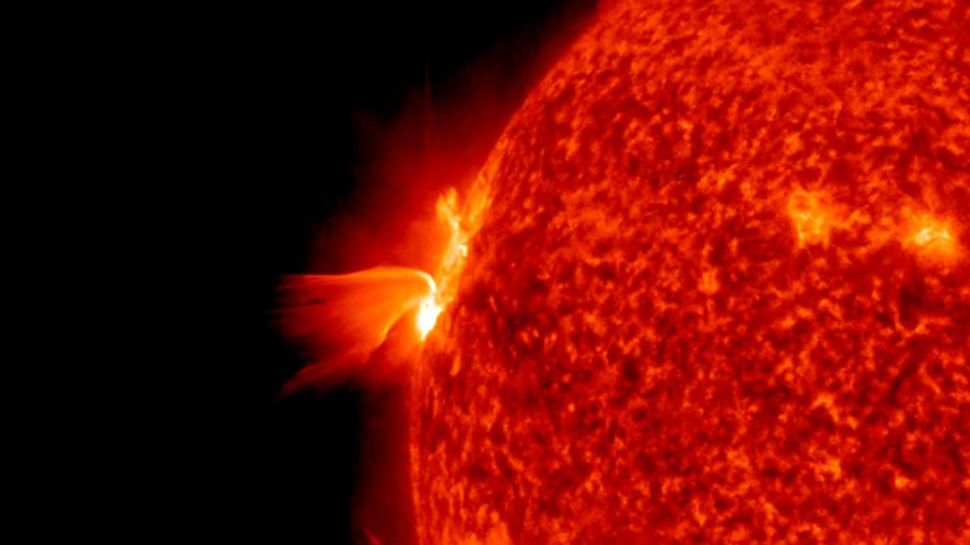 Jan Janssens, a communications specialist at the Solar-Terrestrial Centre of Excellence in Brussels, told Live Science that the sun had already been very active over the last few weeks, and there is no expectation that it will get less active soon.

Last week, the Earth narrowly missed an ejection of solar plasma linked to an even earlier sunspot group.

“This situation is typical at this stage of the solar cycle,” Janssens said in an email. “As the solar cycle is heading for its maximum, more and more complex sunspot regions become visible, which can then produce solar flares.”

Records also show that the current level of solar activity is about the same as it was during the last solar cycle, and even lower than it was at this time during the two solar activity cycles before that, he said.

Pesnell, who’ is the project scientist for NASA’s Solar Dynamics Observatory, said a powerful class X1.1 flare detected on Sunday (April 17) now appears to be from a third sunspot group that’s rotating behind AR2993 and AR2994 onto the visible disk of the sun.

Scientists divide solar flares into five classes, each 10 times more powerful than the last – A, B, C, M and X, according to NASA.

Each category has nine divisions; and the most powerful X-class flares can hold more than 10 times the power of an X1 flare, so in theory there’s no limit to how big they can get – the most powerful on record, in 2003, overwhelmed the sensors at X28.

The Space Weather Prediction Center of the National Oceanic and Atmospheric Administration (NOAA) reported that a pulse of X-rays from Sunday’s X1 flare caused a strong blackout at radio frequencies below 30 MHz across Southeast Asia and Australia.

But it also determined that the CME of stellar material from the latest solar flare will miss Earth.

When CMEs do impact the Earth, however, they can have severe effects – overwhelming power grids or radio communications, for instance, or even harming astronauts in space. They can also directly damage satellites’ electronics and heat the gases of the upper atmosphere to cause increased drag on satellites in low orbits.

“Flares and coronal mass ejections will become more frequent over the next few years, raising the hazard level of solar activity,” Pesnell said.

So far, the modern world seems to have avoided the worst effects of solar storms, and power-grid operators are now “hardening” their equipment against such disruptions.

But some of the worst solar flares in recent memory, during the “Halloween storms” of 2003, blacked out the electricity in parts of Europe and in South Africa for several hours.