(ORDO NEWS) — Gravitational lensing, that is, the effect of light bending around massive cosmic bodies, was tried to be described as early as the beginning of the 19th century within the framework of classical Newtonian mechanics.

And now, almost 220 years later, a duo of astrophysicists from Stanford University (USA) has developed a technology for using the Sun’s gravity as a lens, which makes it possible to obtain detailed images of exoplanets in other star systems at distances of tens and hundreds of light years.

Scientists explains what is behind the term “gravitational lensing”, what astronomers know about this effect, and how such knowledge can be used in practice to study the farthest corners of the Universe.

Gravitational lensing is a phenomenon in which photons of light deviate from their path in a straight line when passing near a massive cosmic body. The body here can be anything – from stars and planets to black holes, galaxies and their clusters. The difference will be only in the strength of the manifestation of the effect.

The first attempts to predict and mathematically describe the phenomenon were made by Johann Soldner in 1801. Although a hundred years before him, Isaac Newton himself ( Isaac Newton ) in the treatise “Optics” mentioned something like that.

In particular, at the end of the third book, Newton formulated a number of questions that occupied him, the answers to which he apparently did not expect to find in the near future, leaving this matter to colleagues or descendants.

The first question on the list can be translated as follows: do not bodies affect light at a distance, by their action bending its rays, and is this action (ceteris paribus) the strongest at the smallest distance? Pretty accurate, by the way, description of the phenomenon of gravitational lensing.

Zoldner, as a true follower of the corpuscular theory of light promoted by Newton, proceeded from the fact that light consists of particles (corpuscles) that have mass.

In this case, passing by massive cosmic bodies, light corpuscles will be attracted to this body, and their trajectory will deviate from a straight line. Just like meteorites, which, flying near the Earth, experience the gravity of the planet and can fall on its surface if they get close enough and their speed is low.

It was Zoldner who calculated the magnitude of this deflection of light near massive bodies. Surprisingly, the result obtained by him in the framework of Newtonian physics, despite the incorrect premises (massiveness of light particles), was very close to the correct answer – the difference turned out to be only two times.

This was noticed by Albert Einstein himself , who first recalculated the value of the theoretical deflection of light in the framework of classical physics (apparently he did not know about the work of Soldner), and then according to his General Theory of Relativity (GR).

It’s not just about the numbers

Many readers will ask a reasonable question: we supposedly know that, according to the Standard Model generally accepted in elementary particle physics, photons of light are massless particles, how then can they be affected by gravity? And that’s just the point, that in any way.

According to general relativity, photons of light do not notice gravity at all and still continue to move along a straight path. But this straight line becomes a “curve” near massive cosmic bodies.

More precisely, these bodies bend space itself – time, due to which the rectilinear movement of light for an observer from the Earth is refracted, almost like in the lenses of glasses.

However, one should understand the big difference between gravitational and optical lenses. The concept of focus is applicable to ordinary lenses – the point at which parallel rays of light converge (focus) after passing through the optical system, whether it be glasses lenses or our eyes.

For a gravitational lens, this concept is inapplicable, because gravity deflects photons of light the stronger, the closer they pass to the center of a massive body. And this means that gravitational lenses have a whole line instead of a focal point.

If the observer moves off the focal line, he will see either an arc segment or a shifted image. And if the lensing body is a galaxy or a cluster of galaxies without circular symmetry, then instead of the usual Einstein-Khwolson ring, only a small arc or another colorful event can be observed – the Einstein cross, a quadruple image of a distant object.

Why are astrophysicists now so sure that the explanation given by general relativity is true? It’s simple: theoretical calculations and predictions made in the framework of general relativity agree well with observational data and have been tested more than once.

There they decided to test Einstein’s calculations and the predictions of his theory for the first time by observing the deviation of the light of stars, which manifests itself in the deviation of their position in the sky, near the surface of the Sun during an eclipse.

The observational results, which are in full agreement with general relativity, impressed the Royal Society of London and made Einstein and his theory world-famous.

Since then, scientists have made many observations with both ground-based and space telescopes to confirm the theory. For more than a hundred years of searching, astronomers have not found anything: Einstein-Khvolson rings, Einstein crosses, space horseshoes, and even space emoticons. 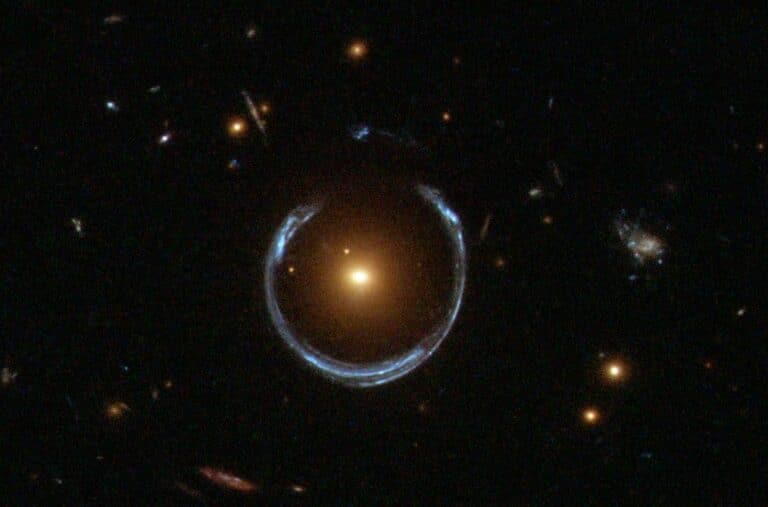 However, in addition to taking simply beautiful (and sometimes funny) photographs, observations have helped, for example, to detect dozens of exoplanets through the microlensing effect – a fairly short-term and periodic phenomenon of an increase in the amount of light coming from the parent star when the planet passes between the star and the observer.

Also, using gravitational lenses formed by clusters of galaxies, it was possible to observe the very first galaxies in the still young Universe – one of them (SPT0615-JD) existed when the Universe was “only” 500 million years old.

Due to the difference in the length of the paths that photons of light from the supernova took through the cluster of galaxies, the image of the supernova in the form of an Einstein cross appeared first in November 2014, and then in December 2015 – exactly in accordance with the model. 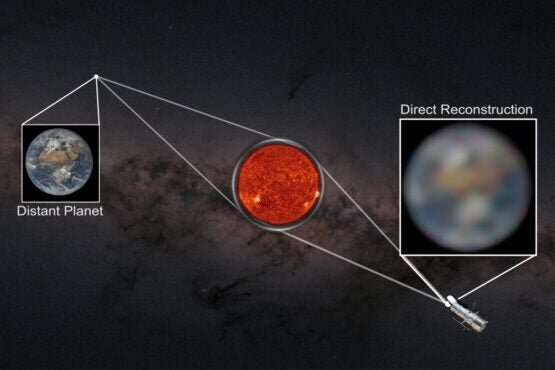 About 30 years have passed since the discovery of the first planet in another star system. Since then, astronomers have discovered more than 5,000 exoplanets, using mainly transit and Doppler observation methods, as well as the already mentioned microlensing.

All three methods consist in observing changes in the characteristics of the light of a distant parent star, and only occasionally can a planet be observed directly (today – only 59 cases for planets that are many times more massive than Jupiter).

Thus, astronomers manage to obtain very limited information about exoplanets: the period of revolution around the star, brightness, approximate mass and density.

However, it would seem impossible to directly observe the details of the surface and atmosphere of exoplanets located tens and hundreds of light years from Earth. Nevertheless, astrophysicists from Stanford University (USA) tried to bypass the physical limitations of modern and a number of future telescopes – so far only theoretically. 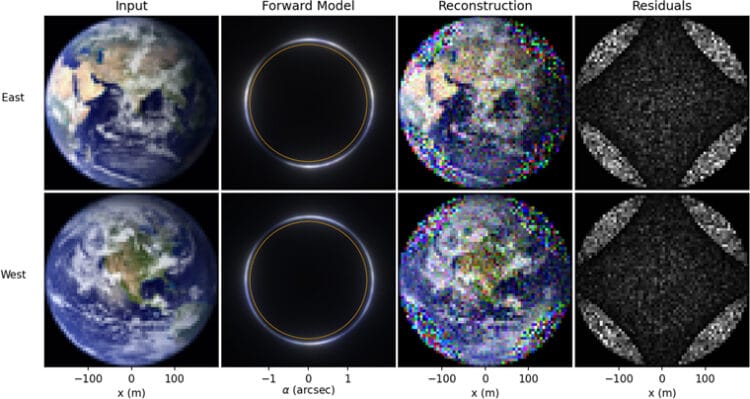 They are working on a new conceptual imaging method that is expected to be 1,000 times more accurate than the most powerful technology in use today. The technology uses the gravitational lensing effect created by the Sun to observe planets far beyond our system.

By positioning the telescope in line with the star and the exoplanet being observed (that is, at the focal line), scientists could use the Sun’s gravitational field to amplify and focus the light from the exoplanet.

“We want to take pictures of planets orbiting other stars as well as pictures of the planets in our solar system,” said study co-author Bruce Macintosh , professor of physics at the Stanford School of Arts and Sciences and associate director of the Institute for Particle Astrophysics. and Kavli Cosmology (KIPAC). “With this technology, we hope to take a picture of the planet at a distance of 100 light-years, which will cause the same excitement in the world as the Apollo 8 picture of Earth once did.

Everything new is well forgotten old

As the authors themselves admit, this idea is not entirely new and is partly borrowed from similar concepts, in which, for example, it was proposed to use the solar gravitational lens to communicate spacecraft at interstellar distances.

After all, whether it be radio waves or laser radiation used for communication within the solar system, in fact, these are the same photons that can be focused by a gravitational lens. And you don’t even have to build any new super-technological devices for this.

Based on the results of previous work, the astrophysicist duo proposed their technology, which is potentially capable of reconstructing the surface of a distant exoplanet from only one image of the Einstein-Chwolson solar ring.

By capturing the annular image of an exoplanet formed around the Sun, an algorithm developed by KIPAC PhD student and lead author Alexander Madurowicz can reconstruct the picture created by the gravitational lens back into an image of the planet. 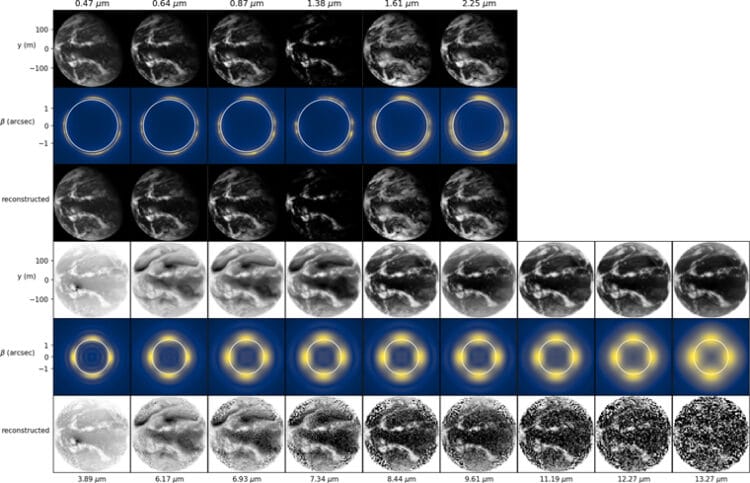 The authors demonstrated the operation of the algorithm by taking photographs of the Earth from space, “encrypting” them into an Einstein-Khwolson ring (as if it were light from an exoplanet six hundred parsecs away) and reconstructing them using the algorithm.

Of course, the resulting images do not have a high degree of detail and contain artifacts, but the oceans, continents and clouds are clearly distinguishable: the Earth is recognizable at a glance. Imagine if earthlings get an image of the same quality, but already a really distant exoplanet.

This place is even farther from us (four times) than the Voyager 1 space probe, the most distant spacecraft from Earth today, of all mankind has ever launched into space. But he has been flying for almost 45 years. And still, this distance is only a tiny fraction compared to tens and hundreds of light-years between the Sun and the nearest discovered exoplanets.

And yet we need it

Now, to get an image of an exoplanet with the resolution that scientists describe in their work, we would need a telescope the size of 20 times the diameter of the Earth.

By using the Sun’s gravity as a massive natural lens, the design of the telescope itself can be greatly simplified. For example, a Hubble-sized telescope combined with a solar gravitational lens would be enough to image exoplanets with good resolution of fine details on their surface.

“The solar gravitational lens opens up completely new possibilities for observation,” explains Madurovich. “This will allow us to explore the detailed dynamics of planetary atmospheres, as well as the distribution of clouds and surface features that we currently do not have the ability to explore.”

The author duo are confident that it will be at least 50 years before this technology can be deployed, and possibly much longer. To complete the project within a reasonable time frame would require a fast spacecraft (not like today’s), because with modern technology, the journey to the place where the telescope needs to be located can take a hundred years or more.

Using solar sails or our luminary as a gravitational slingshot (you can accelerate the device using a gravitational maneuver around the Sun), it will be possible to reduce the time for the implementation of this project to a more acceptable 20 or 40 years.

Although there is no clarity over time yet, Mackintosh says, they are driven by a strong desire to see if some exoplanets have continents, oceans, or clouds. The presence of any of these parameters can become one of the signs of the presence of life on a distant planet.

“Having photographed another planet, you could look at it and maybe see green areas, that is, forests, and blue spots, oceans. And then it would be difficult to say that there is no life on it, ”concluded McIntosh.