(ORDO NEWS) — The graceful coral Pennatulacea looks like a feather of an exotic bird, which is why this species is called sea feathers.

Among polyps, only they have an amazing feature – bioluminescence: as soon as they are disturbed, they begin to glow. We understand how these corals work, why they love company and where they prefer to live.

Our eight-beam (this is the name of the subclass) hero belongs to a special order of marine invertebrates – coral polyps. They can be found at the bottom of the Mediterranean Sea, the Atlantic Ocean, off the coast of Europe.

These deep-sea dwellers, which could become exhibits in underwater museums, prefer quiet dark waters. Therefore, they are available for viewing mainly to viewers with gills living at depths of at least 10 m, but more often from 100 to 1000 m. Although, if necessary, they can also move to the intertidal zone. 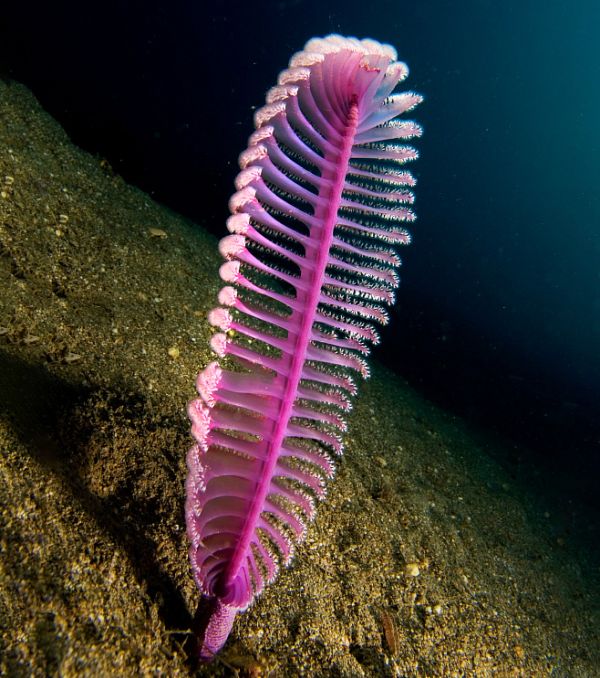 Sea feathers, or pennatularia, are herd animals: they have adapted to live in colonies and confidently settled at the very bottom.

Even strong currents of water that occur during a storm on the surface cannot sweep them away from their homes. All members of the colony agree with each other, “communicate” and act as a single organism, choosing soft, muddy ground for location and stretching upward together. 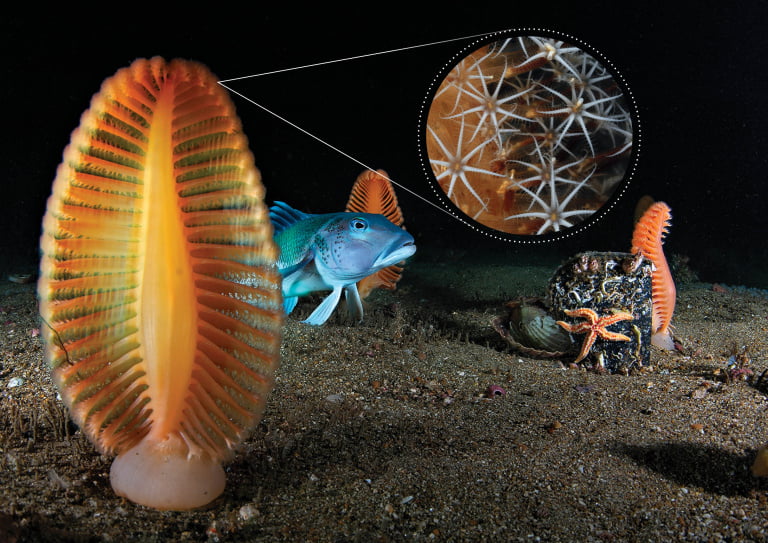 Pennatularians have a developed system of endodermal canals, which are similar in function to skin tactile receptors. The main stem – the base of the feather, which maintains contact between the inhabitants of the entire colony – consists of two parts: central and peripheral.

The first permeates the entire colony, the second is responsible for the channels of response to food. Small polyps grab the plankton passing by with their tentacles, twist the prey into a spiral resembling the fluffy part of a feather, and feed it to the mouth openings.

In such a simple way, small polyps feed the entire colony. If the food is over, and no new one is expected, the sea pen pulls itself out of the soft ground, lies flat and moves along the bottom: it expands, sucking in water through hollow channels, and deflates, pushing it out. Having reached the place where you can profit again. 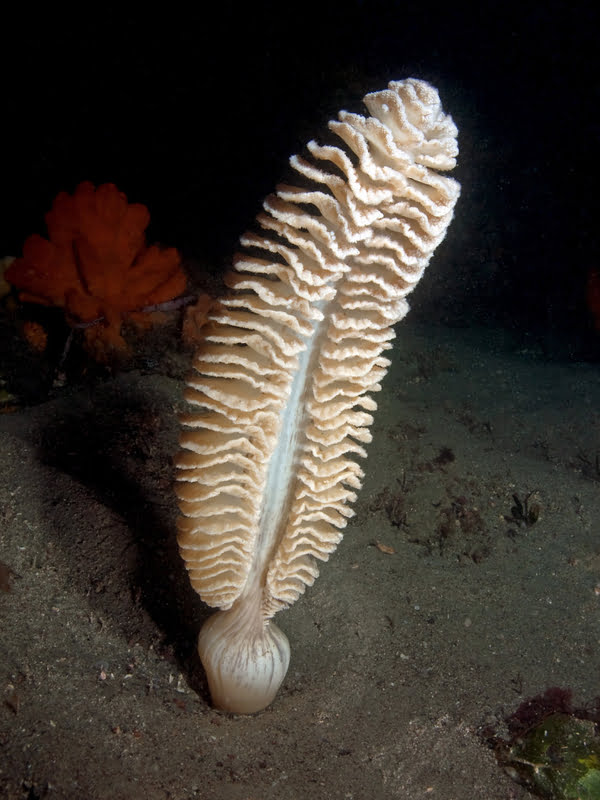 The thicker and larger the visual hairs of the feather, the individual polyp corals, the safer and easier it is to get food. Therefore, the sea pen is formed gradually. During the breeding season, all polyps simultaneously release male and female sex cells – gametes – into the water, where they merge.

Over time, tiny larvae hatch from the eggs. The body of each of them is covered with small cilia, with the help of which the larva swims briskly and maneuvers in the water. Then they are waiting for natural selection.

Surviving individuals fall to the bottom and turn into primary polyps. The young polyp begins to grow rapidly in length, eventually loses its tentacles and mouth opening, and branches with secondary polyps grow on its sides. Rows of small real polyps then appear on them, which “catch” food and feed the entire body. 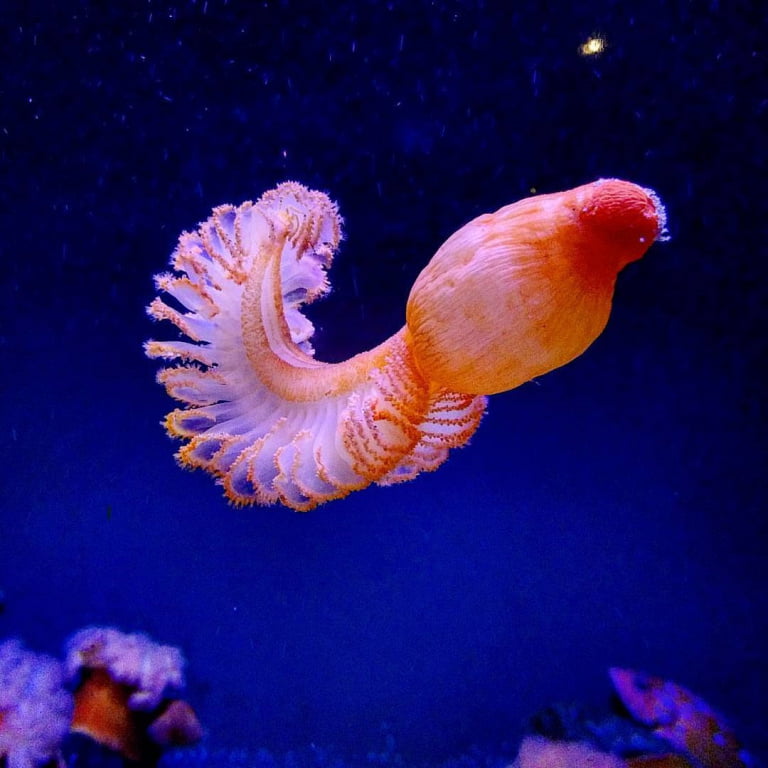 Pennatularia have a very developed nervous system: if you touch one section, the impulse is instantly transmitted to others, and the entire colony flashes with a cold glow. If you start this process simultaneously from the top and bottom, the waves of light will run towards each other and go out when they merge. 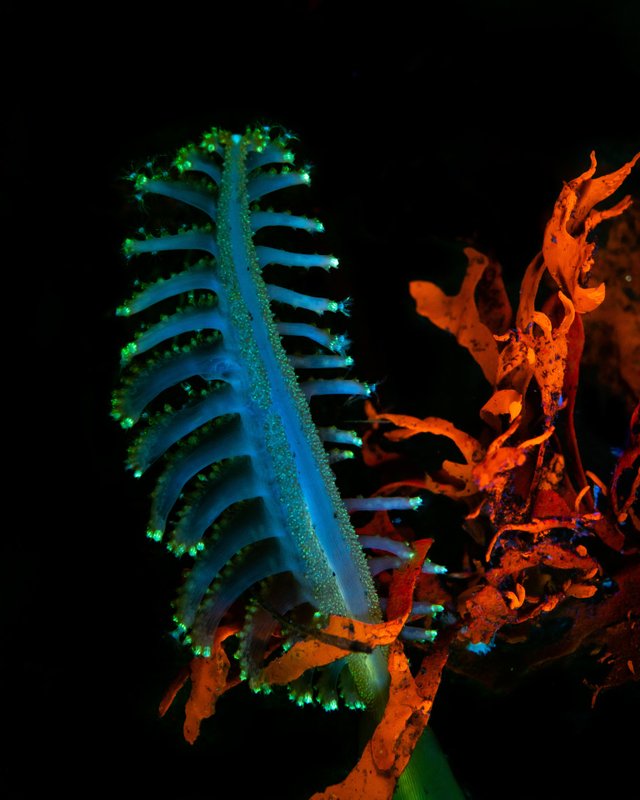 Sea feathers can live up to a hundred years, communicating with each other and sending magical messages into the depths.

You can see the luminous surface of the coastal zone inhabited by sea feathers in Great Britain, Ireland and in the expanses of continental Europe – from the Norwegian fjords to the Mediterranean Sea.

The underwater world is diverse and full of secrets: you never know with what living pen a letter can be written from the bottom of the ocean and, most importantly, who its mysterious sender is.