(ORDO NEWS) — Some animals are seriously injured and may struggle to survive, while others, such as newts and salamanders, have a remarkable ability to repair damaged tissue. A new study has shown that whale sharks can recover from injuries at an extraordinary rate, even if it is due to partially amputated dorsal fins – an ability that no one suspected.

The largest fish on the planet are full of surprises. It turned out that they are able to regenerate even completely bitten off fins.

Whale sharks are the largest fish in the world, and this title attracts a lot of attention from tourists and just lovers of marine life. The authors of the new study highlight how the growing popularity leads to an increased risk of interactions with boats and people vying for the opportunity to see animals in the wild, often resulting in injuries to the sharks themselves.

A team of researchers from the University of Southampton analyzed photographs of whale sharks that inhabit two regions in the Indian Ocean taken by other scientists and tourists. Because animals have unique spots and patterns on their skin, biologists can observe individuals and track how they heal from wounds and scars caused by, for example, a collision with a boat.

“Using a new method, we were able to determine that sharks can heal from very serious injuries in weeks and months,” says lead author Freya Womersley. “This means that we now have a better understanding of the dynamics of injury and healing, which will help preserve the predator population.” 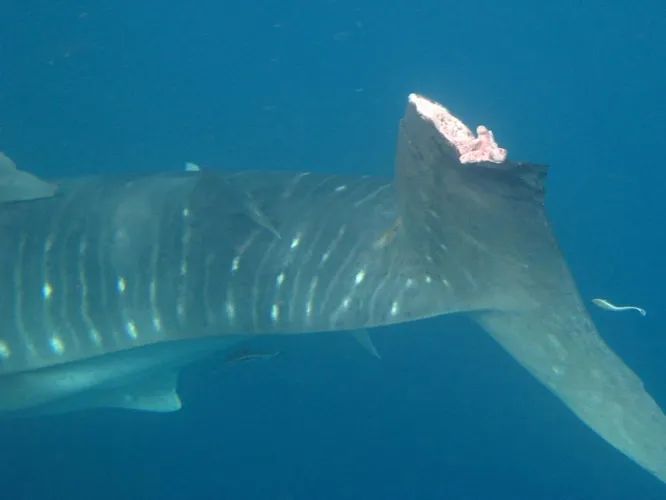 Observing the animals, the team also discovered something really interesting: the whale shark has grown a partially bitten off dorsal fin. The team believes this is the first time such behavior has been scientifically documented in a shark. Interestingly, the researchers also found evidence that the unique patterns on whale shark skins persist after injury, with new spots appearing on top of previously injured tissue.

While the results of the study show that whale sharks may be more resilient to impact and injury than we thought, the team notes that such incidents may have other long-term negative consequences that cannot be captured with photographs. This may include changes in feeding behavior or decreased fitness levels.