(ORDO NEWS) — The giant NIF laser at Lawrence Livermore National Laboratory in the United States is rightfully the most powerful in the world. What temperature can it create.

It is very difficult to imagine the power of this design, but you still try it: a colossal laser is capable of heating the target up to 100 million degrees.

Operating since March 2009, the NIF laser occupies a 10-storey building with an area of ​​three football fields. It has 192 individual laser beams that direct all of their energy at a small target less than a centimeter in size.

This happens in a single, carefully coordinated pulse lasting only a few billionths of a second. The resulting flash of light creates the extreme conditions necessary for nuclear fusion – a temperature of 100 million degrees Celsius and a pressure 100 billion times the pressure of Earth‘s atmosphere.

To understand how NIF achieves such amazing results, it’s worth taking a closer look at what a laser beam is. The word “laser” is short for light amplification by stimulated emission of radiation. And therein lies the key to how these devices work.

The easiest way to explain signal amplification is to use an audio system as an example, where additional energy is pumped into the audio signal to make it louder while maintaining its precise characteristics such as amplitude and wavelength. The laser does the same thing, but it amplifies the light, not the sound.

In the case of NIF 192, the laser beams are gradually amplified as they pass back and forth through plates of neodymium-doped phosphate glass.

The energy for this amplification comes from a series of powerful lamps surrounding the glass plates. Before the beams pass, the intense white light from these lamps is used to raise the electrons within the neodymium atoms to very high energy levels.

Then, when the laser pulse passes through the glass, it fires “stimulated emission”. The excess energy in the neodymium atoms is released as more light waves traveling in the same direction and at the same wavelength as the original pulse.

Thus, the laser beams gradually increase in intensity with each pass, eventually becoming more than a quadrillion times more powerful than when they entered.

While weapons-related research still makes up the bulk of NIF’s activities, about 8 percent of its time each year is devoted to more peaceful experiments. These include research into nuclear fusion in the Sun and other stars, as well as exploring technologies that could help use nuclear fusion as a future energy source on Earth and other planets. 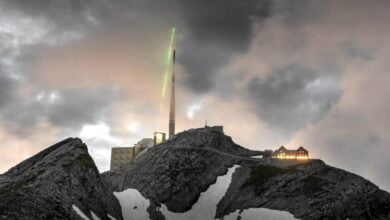