(ORDO NEWS) — In the 15th century, Leonardo da Vinci dreamed of people flying through the air, but it was not until September 19, 1783 that the Montgolfier brothers in Versailles made the first ever aerostatic flight.

The first official free flight in a balloon without safety cables occurred on this day in Paris, France, when the Montgolfier brothers launched a balloon made of silk and paper.

Standing on a circular platform and making fire under the balloon, François Pilatre de Rozier and François Laurent reached an altitude of at least 152 meters (500 ft) and flew about 8.85 kilometers (5.5 mi), before landing 25 minutes later.

But not everything went according to plan, and the two aviators went to extreme lengths to survive. John Jeffreys, who financed the expedition, was a wealthy American physician, and his partner, the Frenchman Jean-Pierre Blanchard, was one of the main innovators of aeronautics.

These two men amassed an impressive crowd on the cliffs of Dover in England and, with only 30 pounds (13.6 kg) of ballast, a few personal effects and a bag of mail, Blanchard and Jeffreys set off at 1 p.m. for the 21-mile (33.8 km) travel to Paris, France, across the English Channel.

Everything was fine when the balloon left the famous cliffs of Dover, but after a couple of miles the device began to move towards the sea. Since neither of the men could swim, a state of controlled panic ensued. They needed to lose weight quickly.

30 pounds (13.6 kg) of ballast went first, but still the ball slowly descended and ended up 6 meters (20 ft) from the killer waves. The wings of the balloon were next to go, then the mail bag and the celebratory bottle of brandy, but they continued to fall.

Jeffreys, “to his dismay, threw away the thermometer, barometer, and telescope.” But nothing seemed to have changed. It was at this point that Blanchard began to take off his clothes and throw them into the sea.

Dr. Jeffreys, however, was a more sedate man, and even the idea of ​​landing in France in a festive costume was contrary to his beliefs, so he remained in his underwear. But the water kept getting closer.

Adrenaline makes a person see the world differently. Everything in your environment becomes a potential survival tool. As Dr. Jeffreys’ survival mind kicked in, it dawned on him that neither of the two men had been in the bathroom after breakfast. 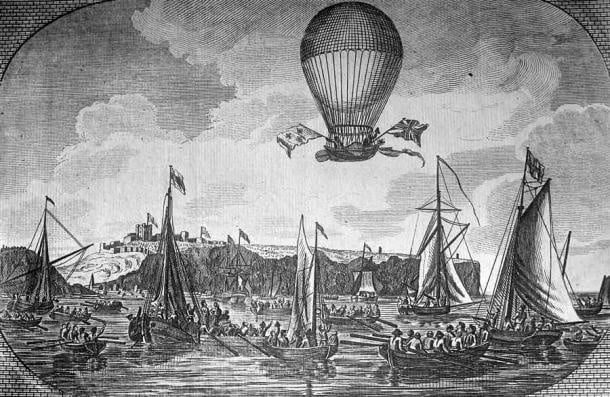 Another engraving depicting the amazing flight across the English Channel by Blanchard and Jeffreys in 1785.

Having urinated in the English Channel, “we were able to get, in my deep conviction, from five to six pounds of urine,” Jeffreys later wrote in his diary.

However, a couple of adventurers were still flying too close to the sea, and at some point the bottom of the balloon began to dangerously touch the tops of the waves.

Frightened, Jeffreys began to climb the balloon’s ropes, but Blanchard demanded that he descend back down, put on a life jacket, and prepare for an emergency landing at sea.

If what happened next had happened in ancient Greece, the sea god Poseidon could be blamed, because just as the coast of France came into view, an updraft lifted the balloon into the relative safety of the sky.

I said “relative” safety, because once the immediate threat of falling into the sea was gone, a whole world of new complexities arose. We can blame Blanchard for the panic when he threw out all his clothes and ballast, because not only did the couple freeze in the air, but they also had no way to control the balloon.

The balloon tossed and tossed through the air and eventually crossed the French coast around 3:00 p.m., but the glory was not yet in their eyes.

They again prepared for a hard landing, this time in the forest of Felmores. If the doctor had not grasped the tops of some trees and braked the balloon, both people might have died, but the balloon caught on the branches, and the platform gently sank to French soil.

After local farmers brought the couple to Calais, they were connected to French officials who confirmed the successful completion of the first English Channel crossing by flying machine.

The fate of two great aviators

In front of President George Washington, Blanchard later became the first person in history to fly in a U.S. hot air balloon.

However, in 1809, while flying in a balloon over the Netherlands, he suffered a heart attack and died in the air, figuratively speaking, halfway through.

Dr. Jeffreys seemed to have ulterior motives for not taking off his underwear. Inside his underpants, Jeffreys kept one letter addressed to “Benjamin Franklin”, who at the time was the American ambassador to France. This letter from Benjamin’s father to his son will go down in history as the first ever letter sent by airmail.