(ORDO NEWS) — Antarctica‘s so-called Doomsday Glacier, nicknamed because it is huge and coming apart, is mostly thwarting an international effort to figure out how dangerously vulnerable it is.

A large iceberg broke off the deteriorating Thwaites glacier and, along with sea ice, it is blocking two research ships with dozens of scientists from examining how fast its crucial ice shelf is falling apart.

Scientists from around the world are part of a multi-year $50 million international effort to study the Florida-sized glacier by land, sea and below for the brief time the remote ice is reachable during the Antarctic summer.

Plans to examine the glacier’s crucial ice shelf haven’t been stopped but are sidetracked a bit, officials said.

New York University environmental scientist David Holland, who planned to drill deep through the Thwaites ice shelf to measure the water‘s warmth below it, is achingly close but not quite there.

Improvising, Holland decamped at the nearby Dotson ice shelf to do his research where no human had been before. He’s hoping that along that blinding white ice and its rugged frozen cliffs he can learn about the unseen warm ocean water nibbling away at both Dotson and Thwaites from below. The smaller Dotson ice shelf is about 87 miles (140 kilometers) west of the Thwaites ice shelf. 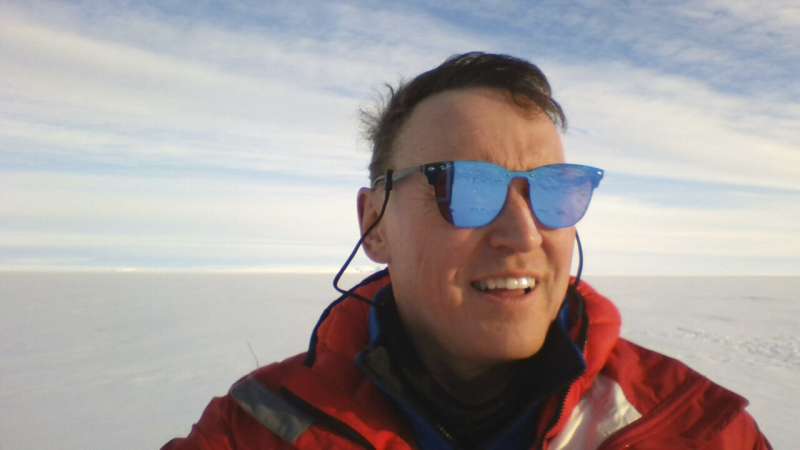 The ice shelf “is the most important part of Thwaites and it’s protecting itself and hiding from us,” Holland said in a first video interview from the Dotson ice shelf. He called Dotson’s ice shelf “this beautiful white desert-like landscape, brilliantly white actually. And it will all be gone and replaced by the Pacific Ocean in due course.”

“Nobody can get to Thwaites this year,” Holland told The Associated Press Monday. “We tried to cut through it for a week. Couldn’t do it. So we’re next to it.”

Thwaites is spawning more icebergs as it’s falling apart, Holland said. This iceberg used to be the tongue or leading edge of Thwaites until it broke off about 20 years ago, Larter said. It measures about 43 miles by 28 miles (70 kilometers by 44 kilometers), almost the size of Rhode Island, according to the National Snow and Ice Data Center.

Much of the problem is that loads of sea ice have gravitated around the huge iceberg. And that’s ironic—and troublesome for researchers—because overall Antarctic sea ice is unusually low for this time of year, Larter said.

While parts of Thwaites’ edges have fast-spreading cracks like a car windshield, safety mountaineers inspected where researchers set up camp on Dotson, and Holland isn’t worried much about danger. As he spoke, a red helicopter landed to evacuate one of his eight-member team the ship because of a sprained ankle, which Holland said isn’t too serious. 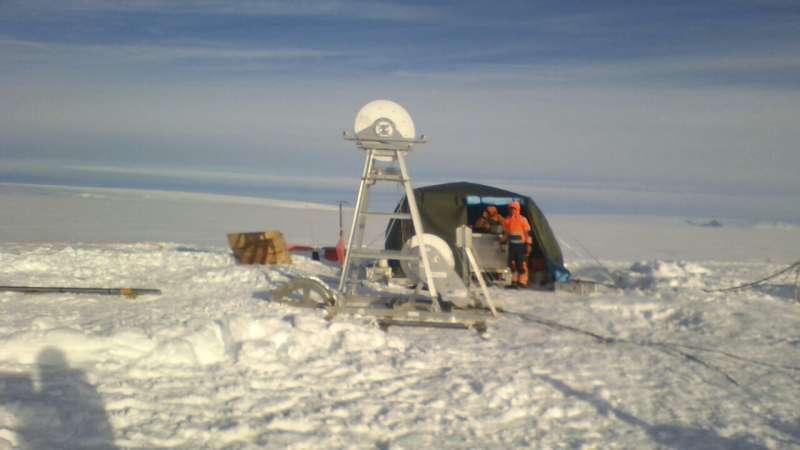 The key to the future of Thwaites is the ice shelf and its tongue. These edges with warm water underneath border the ocean and provide “back support” that holds the rest of the glacier in place, preventing it from falling into the sea, Holland said.

What worries scientists is that leading edge of the huge glacier is breaking apart in many places. Even though total collapse of the glacier could take hundreds or thousands of years, the edge is falling apart much sooner. And if that goes, researchers fear nothing may stop the rest from doing the same.

“I think the ice shelf will be gone in a matter of years to decades,” Holland said via Zoom on a computer set up on an outdoor table in the 24-hour sun, where the morning temperature was -4 (-20 Celsius). “But the actual inland ice, that’s the really unknown question.”

If all of Thwaites collapses, it could raise seas around the globe more than two feet (65 centimeters) but that could take hundreds of years, scientists say. 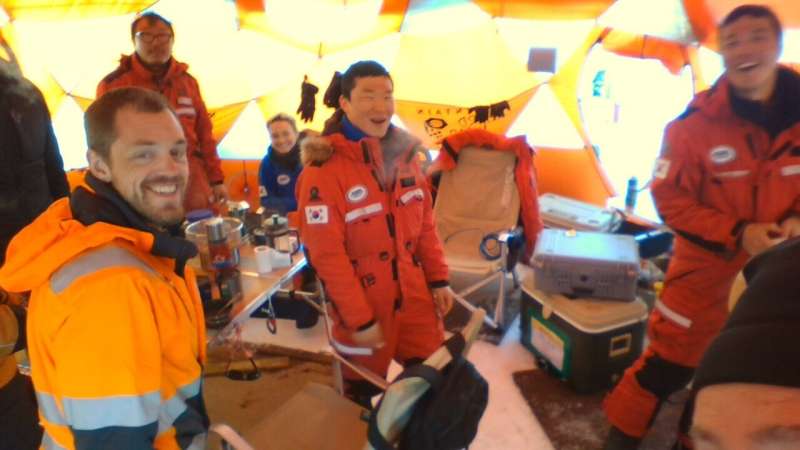 While places like Greenland—where in 2019 Holland studied the melting Helheim Glacier —are melting from warm air above, Thwaites and its neighboring glaciers have it worse because they are melting from the warm water below the ice, which acts faster, Holland said. Part of that is natural weather variations but on top of that climate change is playing a role, he said.

That warm underground ocean water is what Holland came to study with plans to drill hundreds of feet down and put sensors below the ice in the pools of warm water. Warm is relative—it’s about 32 to 34 degrees (0 to 1 degree Celsius), which is still liquid because salt water needs a lower temperature to freeze.

University of Washington ice scientist Ian Joughin, who isn’t part of the research consortium, cautioned that while Thwaites is a big concern, especially the collapse of giant ice cliffs, the earliest his computer simulations show that happening is 200 years from now.

“We need to take these glaciers seriously without sounding like Chicken Little,” Joughin said in an email. 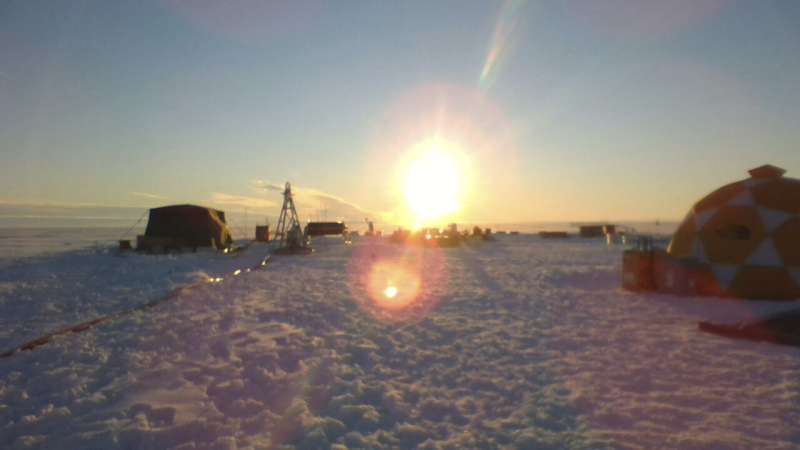 “Once you lose Thwaites you also start draining other ice into that basin,” Cutler told The Associated Press Tuesday. “And so in all the forecasting models, it tends to cause the rest of West Antarctica to collapse over time scales of thousands of years.”

The South Korean icebreaker ship Araon that Holland traveled on has a helicopter so they’ve been able to improvise a landing at Dotson. But the U.S. National Science Foundation research ship the Nathaniel B. Palmer, which has about 35 scientists and two underwater drone ships, has been unable to make it to Thwaites yet and doesn’t have helicopters.

So the researchers on the Palmer are studying Dotson and hoping to wait out the berg, said NSF’s Cutler. Science is getting done, he said. Earlier, researchers coming on land from other parts of Antarctica did put measuring devices on Thwaites, he noted.

“There’s a lot to learn about Dotson,” Cutler said. 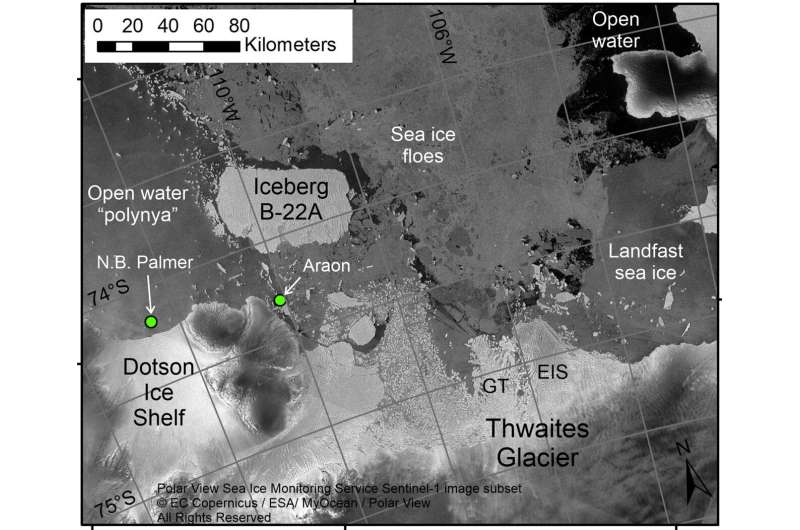 For Holland there’s an appreciation for nature, even its monotone whiteness, where the only sounds are wind and an occasional seagull.

“It’s kind of a lonely place, but in a beautiful way,” he said from Dotson’s ice shelf. “It’s very serene. and it’s kind of unfortunate that it will all be gone.”

Scientists have created a synthetic enamel that is stronger than real

Belly fat can be used to treat joints, scientists say

Scientists have created a synthetic enamel that is stronger than real

Belly fat can be used to treat joints, scientists say