(ORDO NEWS) — A group of Chinese researchers have discovered a giant new funnel with a forest at the bottom.

The sinkhole is 192 meters deep, deep enough to just swallow the arch of the St. Louis Gateway, according to the Xinhua News Agency.

A team of speleologists descended into the sinkhole on May 6, discovering that there are three cave entrances in the abyss, as well as ancient trees 40 meters high, stretching their branches to the sunlight that enters through the entrance to the sinkhole.

“This is great news,” said George Veni, executive director of the National Cave and Karst Research Institute (NCKRI) in the US and an international cave expert.

Weni did not participate in the exploration of the cave, but the organization that was, China Geological Survey Institute of Karst Geology, is a sister institute of NCKRI.

Place for the funnel

The discovery is not surprising, Weni told Live Science, because southern China is home to karst topography, a landscape prone to precipitous sinkholes and otherworldly caves.

Karst landscapes are formed mainly as a result of the dissolution of bedrock, Veni said. Rainwater, which is slightly acidic, picks up carbon dioxide as it passes through the soil, becoming more acidic.

It then seeps, rushes and flows through cracks in the bedrock, slowly expanding them into tunnels and voids.
Over time, if the cave chamber becomes large enough, the ceiling can gradually collapse, creating huge sinkholes.

“Due to local differences in geology, climate and other factors, the way karst appears on the surface can be very different,” he said.

“So in China you have this visually impressive karst with huge sinkholes and giant cave entrances and so on.

In other parts of the world, you go out into the karst and you don’t really notice anything.

Funnels can be quite narrow, only a meter or two in diameter. Cave entrances can be very small, so you have to squeeze through them.”

In fact, 25 percent of the United States is karst, or pseudokarst, which has caves carved out by other factors such as volcanoes or wind, Veni said. About 20 percent of the world’s landmass consists of one of these two cave-rich landscapes.

The new discovery took place in the Guangxi Zhuang Autonomous Region, near the village of Ping’e in Lei County, Xinhua reports.

Guangxi is known for its fabulous karst formations, which range from sinkholes to stone pillars to natural bridges, and have earned UNESCO World Heritage Site status. 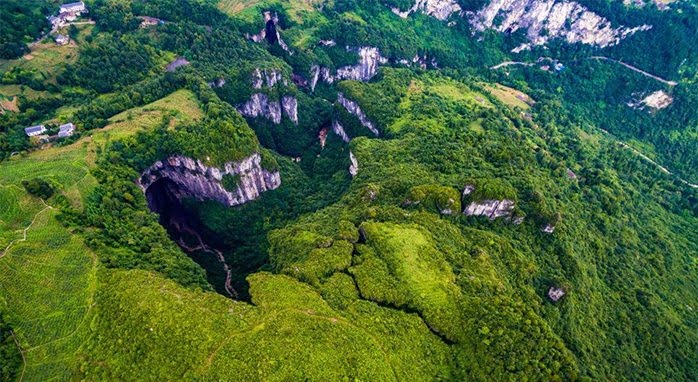 The inside of the sinkhole is 306 meters long and 150 meters wide, Zhang Yuanhai, a senior engineer at the Institute of Karst Geology, told Xinhua.

The Mandarin word for such huge funnels is “tiankeng” or “heavenly pit”, and the bottom of the funnel really seemed like another world.

Chen Lixing, who led the cave expedition team, told Xinhua that the thick undergrowth at the bottom of the sinkhole was as high as a man’s shoulders. Karst caves and sinkholes can create an oasis for life, Veni said.

“I wouldn’t be surprised to learn that there are species in these caves that science has never reported or described until now,” Liksin said.

In a cave in West Texas, Veni said, tropical ferns grow in abundance; fern spores appear to have been carried to a sheltered area by bats that migrate to South and Central America.

Not only do sinkholes and caves offer shelter for life, they are also conduits for deep groundwater storage. Karst aquifers provide the sole or main source of water for 700 million people worldwide, Veni said. But they are easily accessible and drained or polluted.

“Karst aquifers are the only types of aquifers that you can pollute with solid waste,” Veni said.

“I pulled car batteries, car bodies, barrels and bottles of God knows what from an active cave stream.”

The new discovery will bring the number of sinkholes in Lei County to 30, Xinhua said. The same researchers previously found dozens of sinkholes in China’s northwestern province of Shaanxi and a cluster of interconnected sinkholes in Guangxi, China Daily reports.

China on alert after the appearance of three new cases

China on alert after the appearance of three new cases