(ORDO NEWS) — Failure to meet the Paris Agreement’s goal of limiting global warming to 1.5°C could lead to many dangerous “tipping points” as changes in climate systems become self-sustaining, according to a major new study published in the journal Science.

Even current levels of warming have already threatened the world with five major tipping points – including the collapse of the Antarctic and Greenland ice sheets – but it’s not too late to change course, the authors stress.

“I think it will change the face of the world – literally as you look at it from space,” given long-term sea level rise, rainforest loss and more, senior author Tim Lenton of the University of Exeter told AFP.

Lenton authored the first major study on tipping points in 2008.

These points are defined as reinforcing feedback in the climate system that is so strong that it becomes self-propelled when a certain threshold is reached meaning that even if warming stops, the ice sheet, ocean, or rainforest will continue to change into a new state.

Although early estimates suggested that the threshold would be reached in the 3-5°C warming range, progress in climate observations, modeling and paleoclimate reconstructions of warming periods in the deep past has shown that the thresholds are much lower.

The new article is a compilation of more than 200 studies to provide new estimates of when common tipping points might occur. 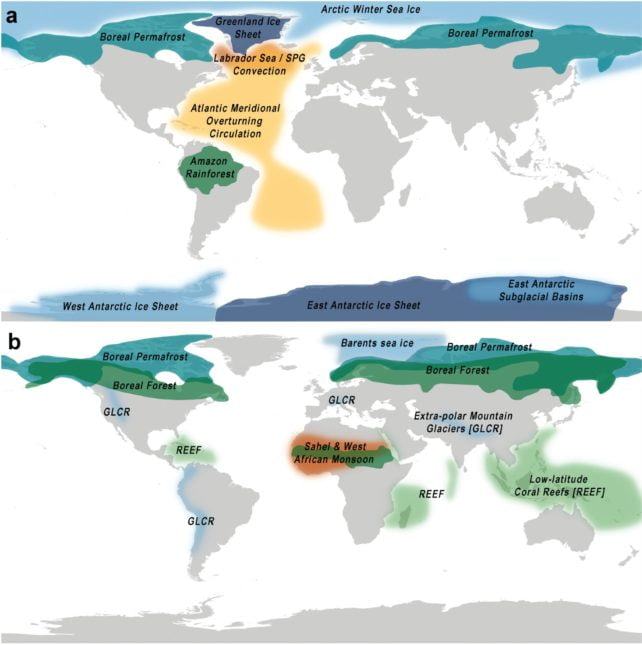 Five of these 16 points could be triggered at today’s temperatures: the destruction of the Greenland and West Antarctic ice sheets; widespread abrupt melting of permafrost; disruption of convection in the Labrador Sea; mass extinction of tropical coral reefs.

Four of these events move from “possible” to “probable” at 1.5°C global warming, and five more become possible at this level of warming.

Passing tipping points for the Greenland and West Antarctic ice sheets means “committing ourselves to another 10 meters of sea level rise,” Lenton said, though that particular change could take hundreds of years. 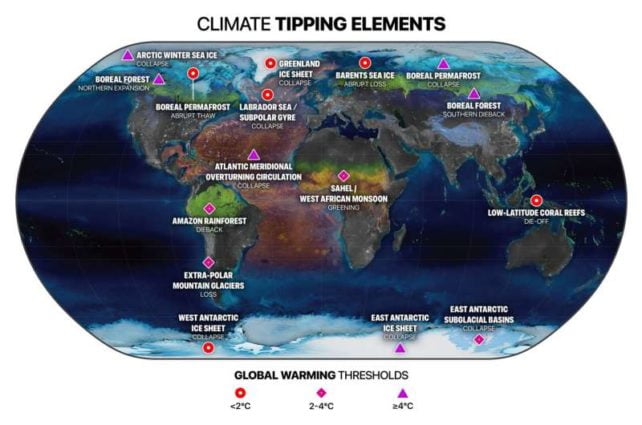 Coral reefs are already experiencing extinction due to warming-induced bleaching, but at current temperatures, they are also able to partially recover.

At a certain level of warming, recovery will become impossible, leading to the death of equatorial coral reefs and the 500 million people in the world that depend on them.

The Labrador Sea convection is responsible for the warming of Europe, and the changes could lead to much harsher winters comparable to the “Little Ice Age” from the early 14th century to the mid-19th century.

The dramatic melting of permafrost that has affected Russia, Scandinavia and Canada will further increase carbon emissions and dramatically change landscapes.

Systems that may come into play around 1.5°C also include the Atlantic meridional inverted circulation, closely related to sea level on the US East Coast.

Starting at 2°C, the monsoon rains in West Africa and the Sahel could be severely disrupted, and the Amazon rainforest could face widespread “die-off” to become savannah.

The first author of the study, David Armstrong McKay, stressed that even if global warming reaches 1.5 ° C, much will depend on how long it lasts, with the most severe consequences if temperatures remain this high for five or six decades.

Also, “these tipping points that occur at 1.5°C don’t add a huge amount of global warming as feedback – and this is very important because it means that at 1.5°C we are not in a running train situation.” “.

This means that humanity can still control further warming, and “it’s still worth cutting emissions as fast as possible,” he added.

Lenton said he was encouraged by the idea that human society can have its own “positive” tipping points, where years of incremental change are followed by urgent, sweeping action.

“This is how I can get out of bed in the morning… Can we change ourselves and the way we live?” – he said.

Archaeologists have found the oldest shipyard which is 8000 years old

Archaeologists have found the oldest shipyard which is 8000 years old