(ORDO NEWS) — A fireball that erupted in the sky over Papua New Guinea in 2014 was actually a fast-moving object from another star system, according to a new report from the US Air Force Space Command.

The object, a small meteor measuring only 0.45 meters in diameter, burned up in Earth‘s atmosphere on January 8, 2014 after traveling through space at over 210,000 kilometers per hour – a speed that far exceeds the average speed of meteors in orbits within the Sun. systems. The study of the object is the subject of a 2019 paper published in the arXiv database.

A 2019 study claimed that the speed of a tiny meteor, as well as the trajectory of its orbit, proved with 99 percent certainty that the object had arrived in the solar system from outside.

But, despite the almost complete validity and confidence, the article of the research team has not yet been peer-reviewed and not published in a scientific journal, since some of the data necessary to verify the calculations of the researchers turned out to be classified by the US government. 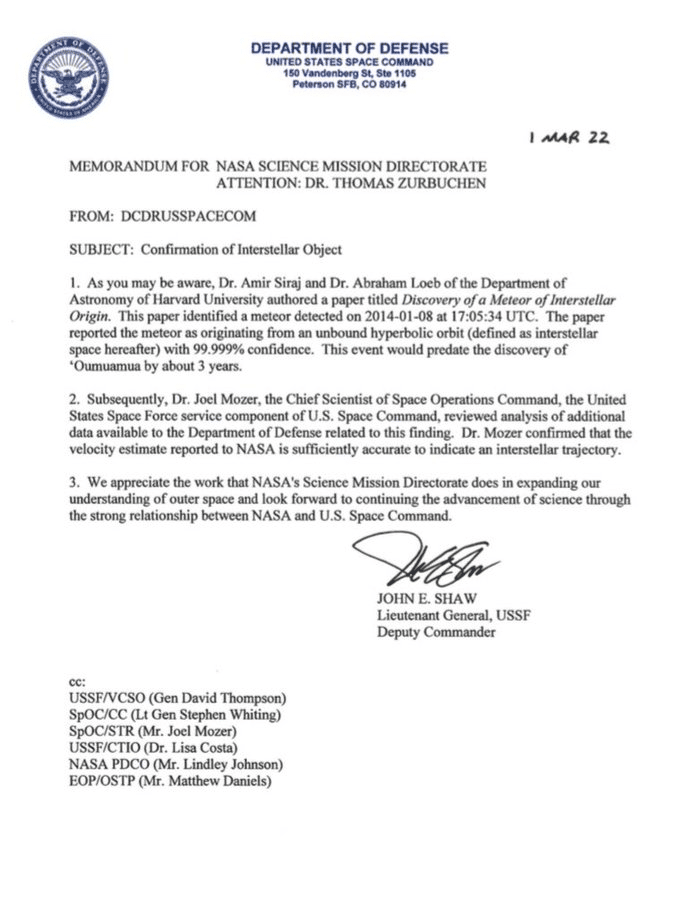 Now, the US Air Force Space Command (USSC) has officially confirmed the findings of the research team. In a March 1 memo posted to Twitter on April 6 (see above), Lieutenant General John E. Shaw, USSC Deputy Commander, wrote that the 2019 analysis was “accurate enough to confirm an interstellar trajectory.”

This confirmation, albeit in hindsight, makes the 2014 meteor the first interstellar object ever reliably detected in the solar system, the memo says. According to a USSC memo, the sighting of the object preceded the discovery of the well-known cigar-shaped object Oumuamu.