(ORDO NEWS) — On August 31, 1967, at approximately 10:30 am, 13-year-old François Despleches and his 9-year-old sister Anne-Marie were in a field near their home on the Cantal plateau, near the village of Cussac, Saint-Flour commune, Auvergne, France.

The children looked after a herd of farm cows and their dog named Medor was with them.

At some point, the cows went to the other side of the field, which was crossed by an old low stone fence. François climbed onto the fence to get a better view of the movement of the cows, and froze in place.

Approximately 40 meters away, he saw moving figures that looked like children of his age. However, for the local children, they looked strange, as they were completely black, from their hunger to their clothes. Their clothing resembled a tight-fitting silky jumpsuit.

Next to the figurines on the grass stood a large object in the shape of a ball, which emitted such a strong glow that it was painful to look at.

One of the small humanoids sat down and did something on the ground, the other held some kind of tool in his hand, reflected in the sun, and waved his hands to two humanoids standing a little further away.

François still thought they were some children and he called out to them “Hey, will you come to play with me?”. And at that moment, all four humanoids behaved as if they were taken by surprise.

The first little man straightened up and immediately “flyed” vertically, and then disappeared inside the ball, as if “diving” into it.

The second did the same, and then the third. The fourth one first picked up something from the ground and at that moment the round sphere flew up and began to move in circles over the field. The fourth humanoid had to fly after her, and then he “dived” into her.

When the sphere took off. François and his sister heard a sharp hissing sound. The sphere made several circles over the field. and then sharply increased speed and flew to the northwest.

At the moment the sphere flew away, the children smelled a strong smell of sulfur, and the cows began to moo at once and move restlessly. The dog began to bark loudly, staring in the direction where the orb had disappeared.

Because the cows became agitated and scattered too widely across the field, François and his sister had to spend an extra half hour collecting them. Then they took the cows to the village and told their parents what they saw.

They were able to give descriptions of the sphere and humanoids, although they were dubious about some of the details. So Anne-Marie claimed that the sphere stood on the grass on four supports, but François did not see anything like that.

Both of them, however, agreed that the sphere was quite small in diameter, only about 2 meters. François was sure that his sister had taken some branches on the ground for support. 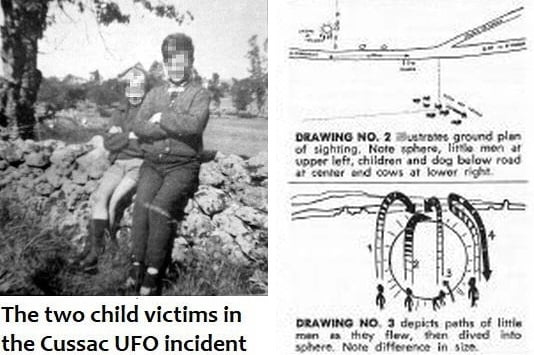 As for the details of the appearance of the creatures, here the children described everything in the same way.

The hands of the creatures looked long and thin, and François and Anne-Marie did not notice their fingers. The legs were also thin, but short, and the feet looked so strange, as if they were webbed, like the paws of a duck.

The head of the creatures did not look too large in relation to the body, but the nose and chin looked unusually “pointy”. No eyes or mouth were visible, but some hair was visible on the sides of the head, like sideburns.

The children did not see any aircraft on the body of the creatures, so they could not answer the question of how humanoids could fly.

Later, ufologists Joel Mesnard and Claude Pau spoke with the children, and then the whole incident was published in the Phenomena Spatiaux magazine.