(ORDO NEWS) — In an age of universal digitization, when everyone in the pocket for at least one device with a camera, to keep any developments in total secrecy seems impossible, especially if they require a prepared site in the open air test. However, Otto Aviation almost succeeded.

A little over three years ago, there was a small industry sensation when an airfield in Victorville, California was spotted a mysterious futuristic looking aircraft unlike any other known prototype. No one knew what it was, and the strangest thing was that there were no military around, that is, this secret vehicle was serviced and tested by civilian specialists. And in our time, a commercial office looks very strange, which does not advertise its projects: after all, how else to attract investors, create information noise and fuel market expectations?

Someone looking for an ID of an unusual looking aircraft spotted at the Southern California Logistics Airport. https://t.co/83J7RqOpvy pic.twitter.com/eAPrXNwIEf

After the first photos appeared, users of aviation forums conducted a whole investigation. From the registration number on the keel of the prototype, the name of the developer company was established: it turned out to be the mysterious Otto Aviation Group LLC, which does not have any track record and which no one has ever heard of. One of its founders is the physicist William Otto, who worked at Rockwell International on the B-1 strategic bomber. Further, a patent was found for an aircraft identical to the one seen, and everything became much more interesting. 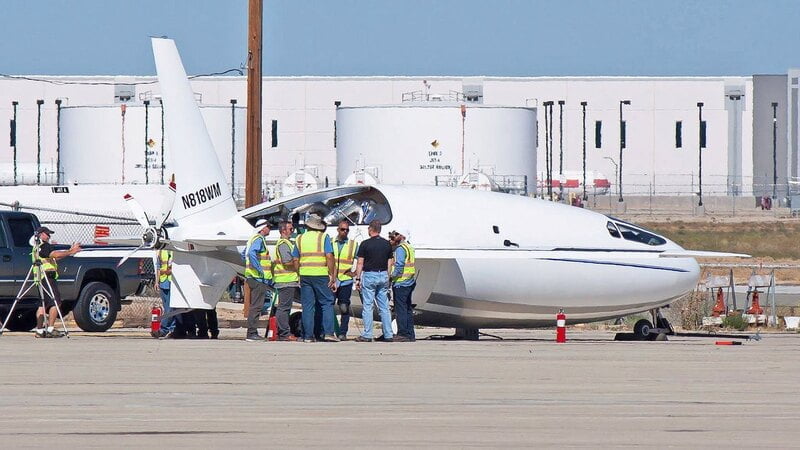 As follows from registration record FAA, the prototype has the name Celera 500l, but, unfortunately, this is the only thing that can be said about it with confidence, everything else is either details from patent application, or a fairly free interpretation of documents and structural elements visible in the photographs. The creators of the aircraft plan to achieve unbelievable efficiency for aviation: up to ten times less fuel consumption compared to turboprop models with similar characteristics. At the same time, the flight altitude will reach almost 20 kilometers, and the cruising speed will be 510 knots (926 kilometers per hour).

The Celera 500l has a bullet-like fuselage with superior aerodynamic properties. The power plant is a 12-cylinder aviation diesel engine with multi stage turbocharging RED A03… The patent application lists two units, but there is only one in the FAA card. This is most likely due to design changes during the testing and development of the machine. The motor drives a five-blade, variable-pitch pusher propeller with saber blades. Earlier it was assumed that in the future this aircraft could be equipped with experimental engines based on alternative energy sources – electric or hydrogen.

Another interesting feature of the Celera 500l is the design of the flaps from several planes, which makes it possible to change the wing geometry in a wide range, and, accordingly, its aerodynamic characteristics. When taking off from a short runway of a small airfield, you can create a large lift, but at the same time, at a high echelon, the mechanization can be completely removed in order to reduce losses from drag and air flow around the excess area. It is not known whether this technology is embodied in an existing prototype, but such a solution has not yet been used in small aircraft.

A new wave of interest in the strange plane took off in May 2019 when photos of the Celera 500l were posted while speeding around the airfield. At this stage of testing, the behavior of the aircraft in various modes on the ground is checked. In the time that has passed since its first appearance in public, the aircraft has acquired wingtips and two massive air intakes with elements that look like a bypass device in the rear. This design suggests the use of the so-called Meredith Effect to improve flight performance – passing through the engine radiators, the air heats up and creates a small thrust, which compensates for the drag created by the cooling system.

Regardless of whether the Celera 500l can achieve the declared characteristics, Otto Aviation has already managed to do the incredible and return all aviation enthusiasts to those years when even the largest companies kept a veil of secrecy over their developments. Photographers with cameras at the ready, like spies, went on reconnaissance to the airfields, hoping to take a picture of the new car. And then, together with the same fans, they studied them and speculated about what revolutionary technical solutions were used in the design. For uninitiated people, such photographs did serve as a reason to believe in UFOs or the connection between engineers and aliens.

EasyJet Airlines has discovered a data leak of 9 million customers

EasyJet Airlines has discovered a data leak of 9 million customers