(ORDO NEWS) — Archaeologists conducting excavations in northern Greece, near the city of Kozani, found the burial of a woman of the 1st century BC, reclining on a bronze bed frame decorated with a mermaid’s head. The wooden parts of the bed had rotted over the centuries.

The find is currently housed in the Eani Archaeological Museum in Western Macedonia, Greece. About this with reference to the message of the director of the Kozan Ephorate of Antiquities Areti Chondrogianni-Metoka.

Images of mermaids also adorn the bedposts, and in addition, there is an image of a bird holding a snake in its mouth, a symbol of the ancient Greek god Apollo. The woman’s head was covered with golden laurel leaves, which were probably once part of a wreath.

According to Chondrogyianni-Metoka, gold threads were also found on the woman’s hands, possibly left over from embroidery. Four clay pots and a glass vessel were buried next to the woman. There were no other graves nearby.

Experts are now analyzing the skeleton to determine the woman’s state of health, the age she died and a possible cause of death. Artifacts found with her suggest that she probably came from a wealthy family, perhaps even belonged to a ruling dynasty.

“We know little about what was happening in that region at that time,” Chondrogianni-Metoki said.

“It is only known that thousands of years ago Kozani was located near an important city called Mavropigi (now a village), in which there was a sanctuary dedicated to Apollo.”

Historical records show that during the 1st century BC. significantly increased Roman control over this part of Greece. The Romans destroyed the city of Corinth in 146 BC. and sacked Athens in 86 BC.

In 48 BC in a decisive battle in northern Greece, known as the Battle of Pharsalus, Julius Caesar’s army crushed Pompey’s army, and this victory led to the fact that Caesar was the de facto ruler of Rome.

Retired woman regained her sight with an implanted chip

Retired woman regained her sight with an implanted chip 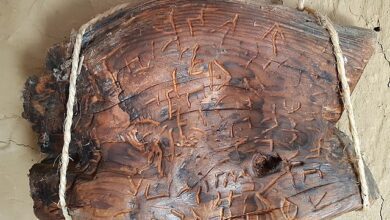