(ORDO NEWS) — I try very hard not to judge other cultures and avoid using the term “weird” when discussing them.

After all, “weird” is subjective. For example, I am sure that if I had to explain religious rites to someone unfamiliar with them, it would sound monumentally strange.

“Wait, they eat bread, but is it really someone’s body? Like human flesh? Then you drink wine, but is it blood? Is this a vampire cult?

And you mean this guy died, came back to life and let someone poke a finger into the holes in his arms? What? Weird.”

I can hear about the practices of other religions and other cultures and react to it reflexively. I can watch videos on YouTube of people boating down the Ganges in Varanasi, looking at burning bodies – and trying not to be judgmental.

So I try to correct my brain when I hear something about another culture. I try to account for all these variables and avoid the word “weird”.

But despite that… this piece of art is really fucking weird.

This painting is a fresco: paint is applied to wet plaster. It was found on the lower part of the wall connecting the columns of the peristyle.

For those who do not know, the peristyle is something like a porch with columns. There are many of them around the courtyards of houses in Pompeii.

Not the houses of “ordinary people”, mind you. I mean rich houses. This particular house is known as the Doctor’s House.

Like almost all buildings in Pompeii, almost everything of interest has been removed. The statues have disappeared, the mosaics have been removed, the frescoes have been carved from the walls. 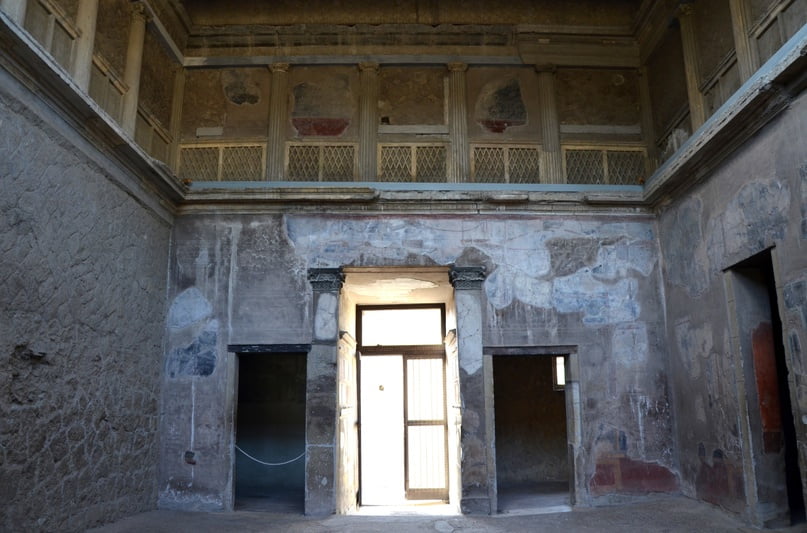 And virtually none of it has been replaced by copies. Actually, it makes me very angry. Don’t misunderstand me.

It’s just that you walk into these ruins and they’re bare, and you know they’re trying to protect these things, but you don’t understand why they can’t put up copies, and it’s like the whole city has been sacked… 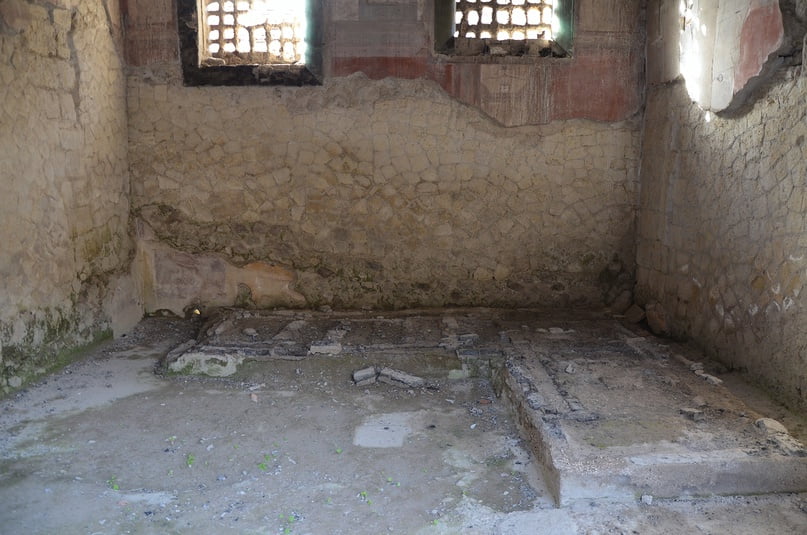 Yes, in Pompeii there are such frescoes, the plots of which are very “obscene” for our time, but this is our history – the history of Humanity, whatever it may be.

Moreover, there are few such obscene plots, and all frescoes have been removed from the eyes of people. 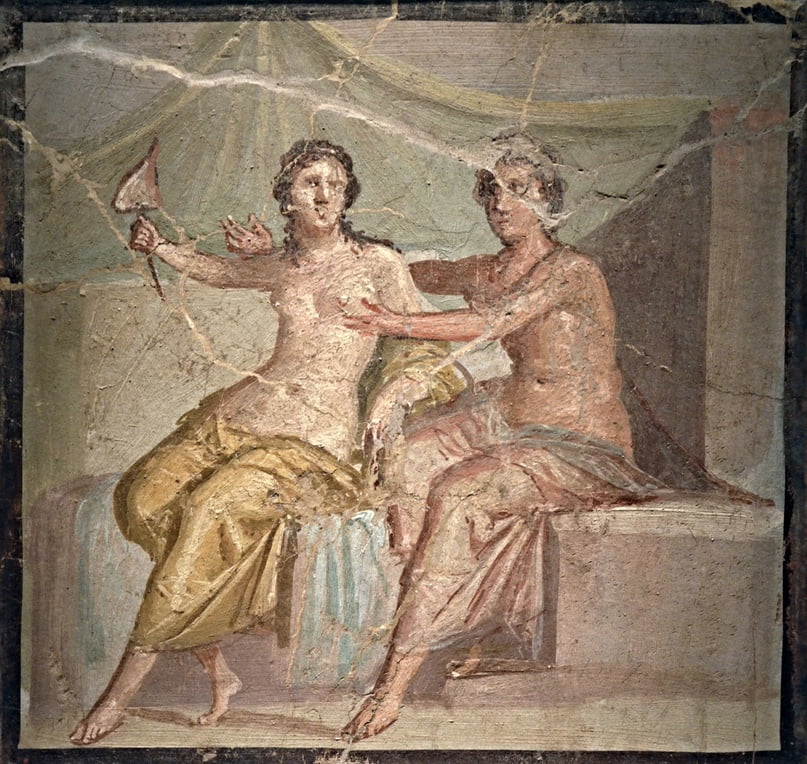 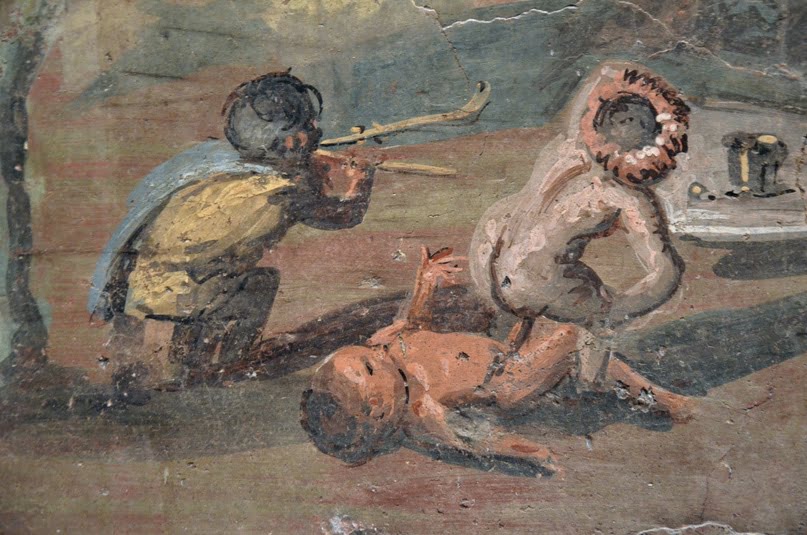 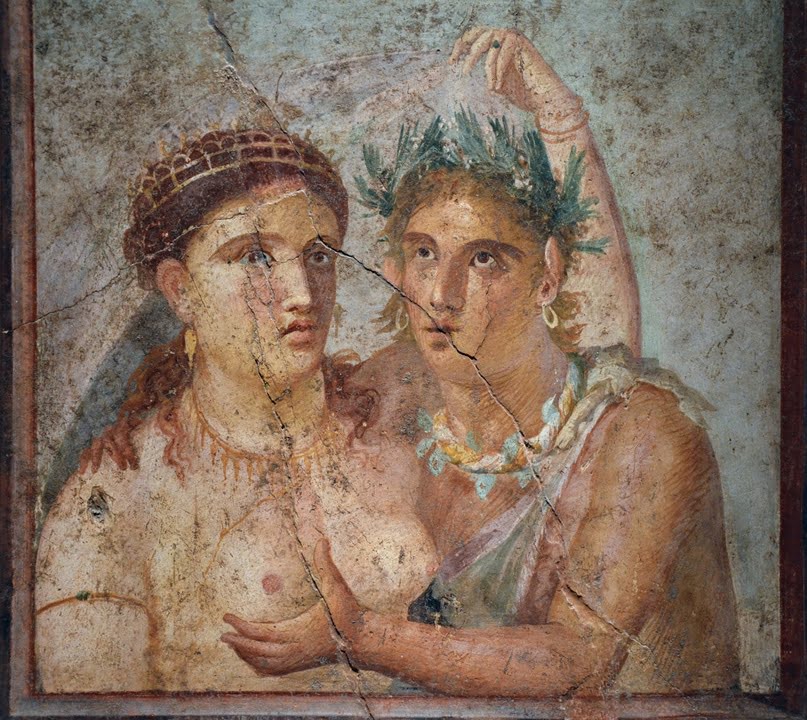 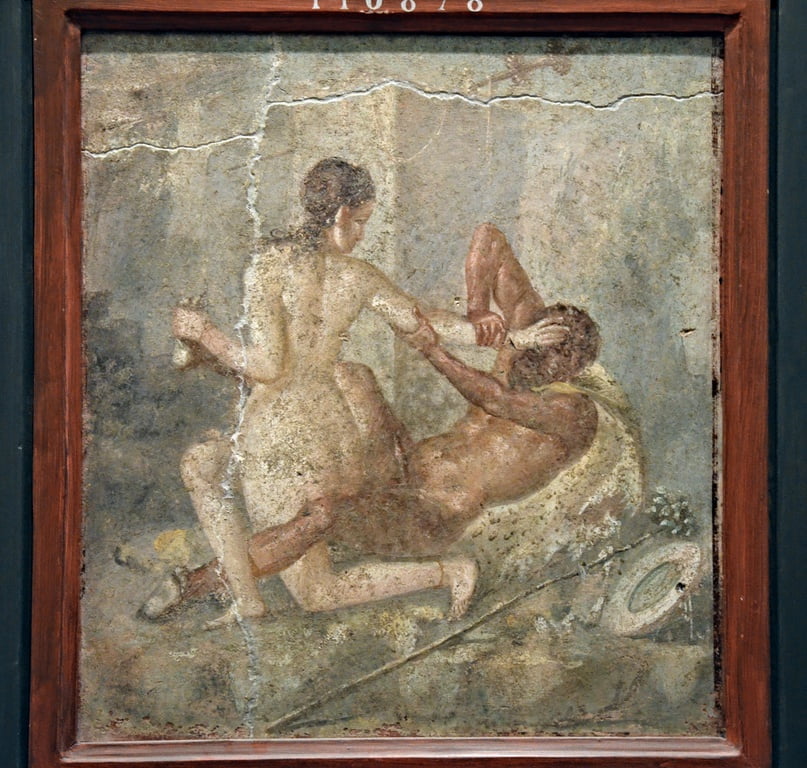 So, this particular fresco is on display at the National Archaeological Museum in Naples. You’ll wander around looking at little scenes of Roman goddesses, or a bakery selling bread, or maybe a poet writing his latest work on a scroll.

I don’t even know where to start. It appears to be a pygmy using a stick to poke a horse-legged hippopotamus. Another rides what appears to be a Dimetrodon. And then there’s the guy throwing a potato at a komodo dragon.

It turns out that this is the so-called “nilotic scene”. That is, a scene depicting life on the Nile River. I have been on the Nile and have never seen anything like this “delirious dream”.

Well, except for a guy in Luxor who claimed to have a taxi in the West Bank, but it actually belonged to his brother, then it turned out that they were not brothers at all, but were at odds, and I had to spend the next three days, avoiding this guy to not pay two guys to work one when I should have just given it all to the man who actually owned the cab.

Except when he wasn’t there and his “son” was driving. Who probably wasn’t his son at all.

This “Nilotic scene” depicts pygmies. One of them sits on the back of a hippopotamus and stabs him with a spear. Two other pygmies are in the boat, one of them is being devoured.

The two light-skinned ones are in the water and are presumably swimming – although one looks dead to me. Presumably, these are “Carpi”, like the little Nile gods.

The pygmies then steer the ship while the other pygmies fight and tame the crocodiles.

Yes, they are crocodiles. I can only assume that the artist (and probably the owner of the house) did not see a real crocodile. I know that some people in ancient Rome saw it, so I can imagine how embarrassing it would be if a guest walked in and met a crocodile and had to decide whether to say something.

I probably wouldn’t. Depending on how well I know this person. I think it would be like someone having a booger in their nose or a price tag hanging on the back of their shirt. It would be polite to spare them future embarrassment, but the very fact of pointing this out is embarrassing in itself. For both sides. 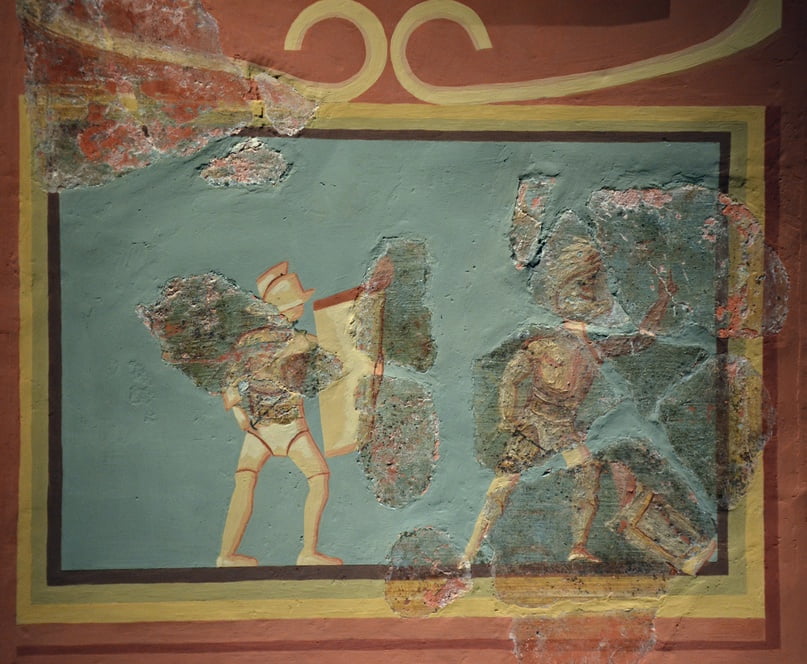 The owner of a house in Pompeii hires an artist who paints a fresco with gnomes (pygmies), but who has never seen crocodiles in his life? Well, ok, maybe it was. After all, if these are not pygmies or crocodiles, then a more difficult question arises – what is it all about ?! 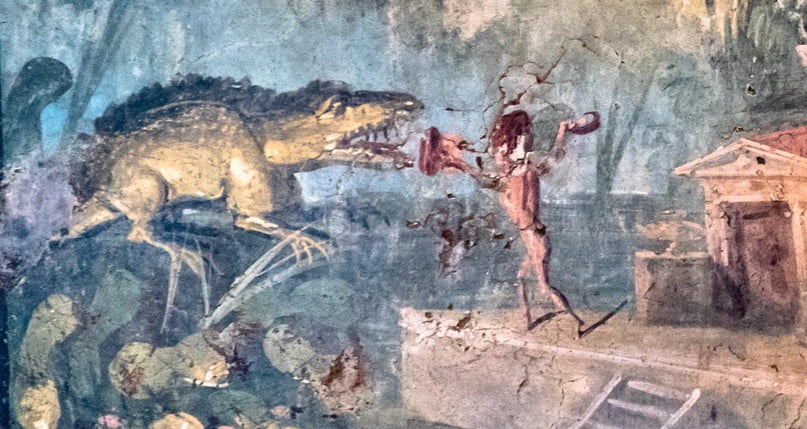 In 31 BC. Octavian – nephew of Julius Caesar, who later became Augustus, the first Roman emperor – defeated the combined forces of Mark Antony and Cleopatra at the Battle of Actium.

It was the culmination of the most historically significant love triangle in human history. Well… that’s a simplification. And for sure there are equally bad love triangles in reality shows, I’m sure.

In any case, imagine this: the Battle of Aktium, an incredibly large-scale naval battle off the western coast of Greece. Hundreds of galleys.

Ballista catapults that punch holes in ships. Wood chips that hit people. The sun is covered with arrows. Harpoon-shooting machines that grab ships and bring them close enough to board. Fully armored soldiers slash each other on the decks.

The ships are on fire. The air is thick with smoke. Eyes are burning. The screams of people. People jump overboard, they are dragged under water, trying to remove their armor. 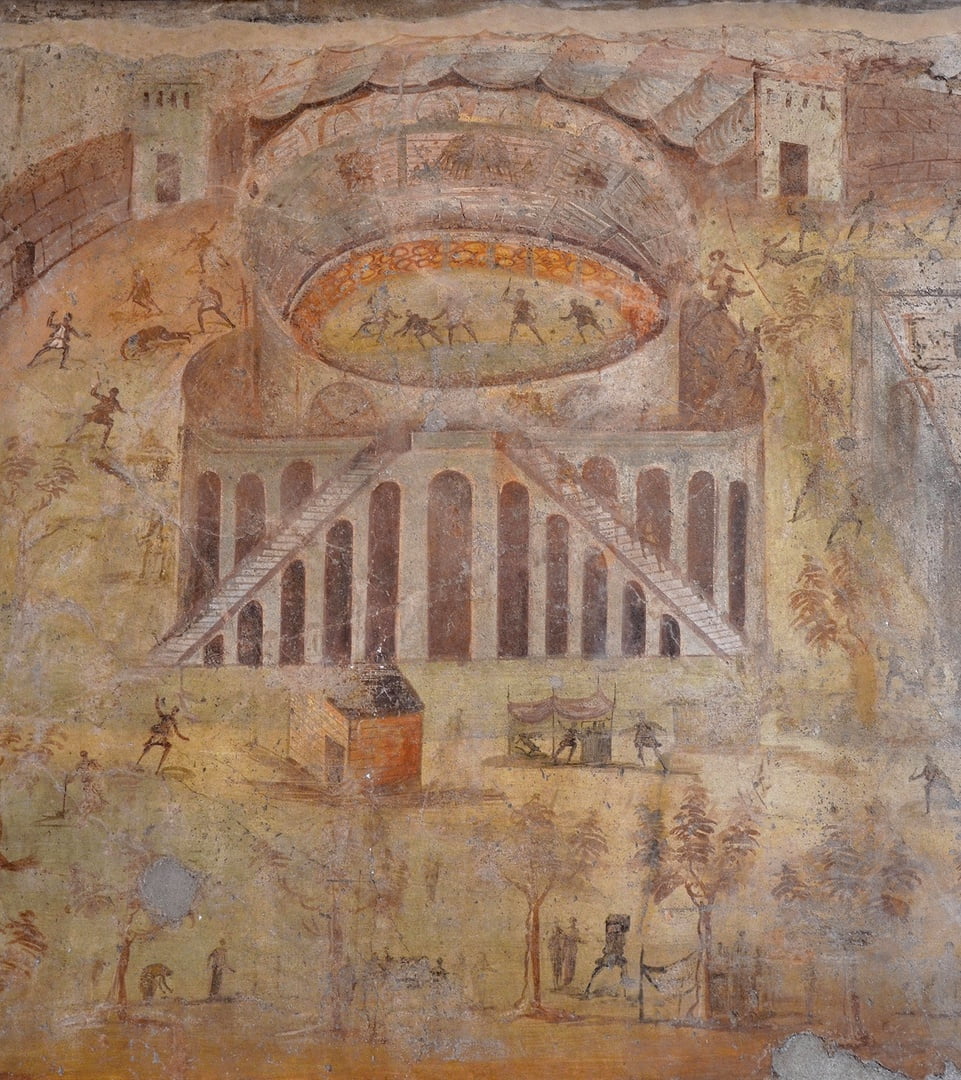 End result: Octavian marches into Egypt. Mark Antony stabs himself and dies. Cleopatra kills herself with a snake bite. Octavian kills Cleopatra’s son by Julius Caesar, securing his rights to the throne. 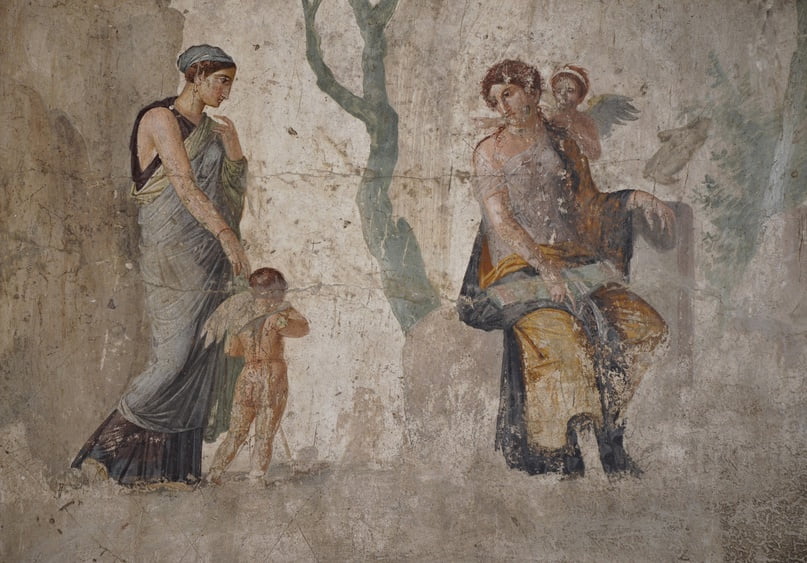 For most people in Egypt, things continued more or less as before. Of course there were changes, but in general Rome tended to let people go about their business as long as they didn’t cause problems.

However, the Egyptians did not have the same status in the Roman Empire as others. Unlike the Greeks, I think many Romans thought the Egyptians were too “other”. Here again this word: “strange”. The Romans considered the Egyptians strange. Not all, not necessarily in a racist or derogatory sense, and not always, but sometimes.

So here we are: Pompeii. After about 150 years of Roman rule in Egypt, someone draws scenes with small Egyptian pygmies in the courtyard of his house.

War of the Pygmies

So let’s get one thing straight: Pygmies do exist. These are real-life ethnic groups, consisting of people who are below average height.

There is much debate about the reasons for this, but most agree that it may be due to lack of sunlight under the forest canopy, or lack of nutrition, adaptation to heat and humidity, and so on.

Pygmies are found all over the world. In Africa, they are mainly in the central part: in the Congo Basin.

There were also pygmies in ancient Egypt, although they seem to have come from the Congo Basin region – they were brought as captives, where they danced at parties. There were also gnomes, but this is completely different. 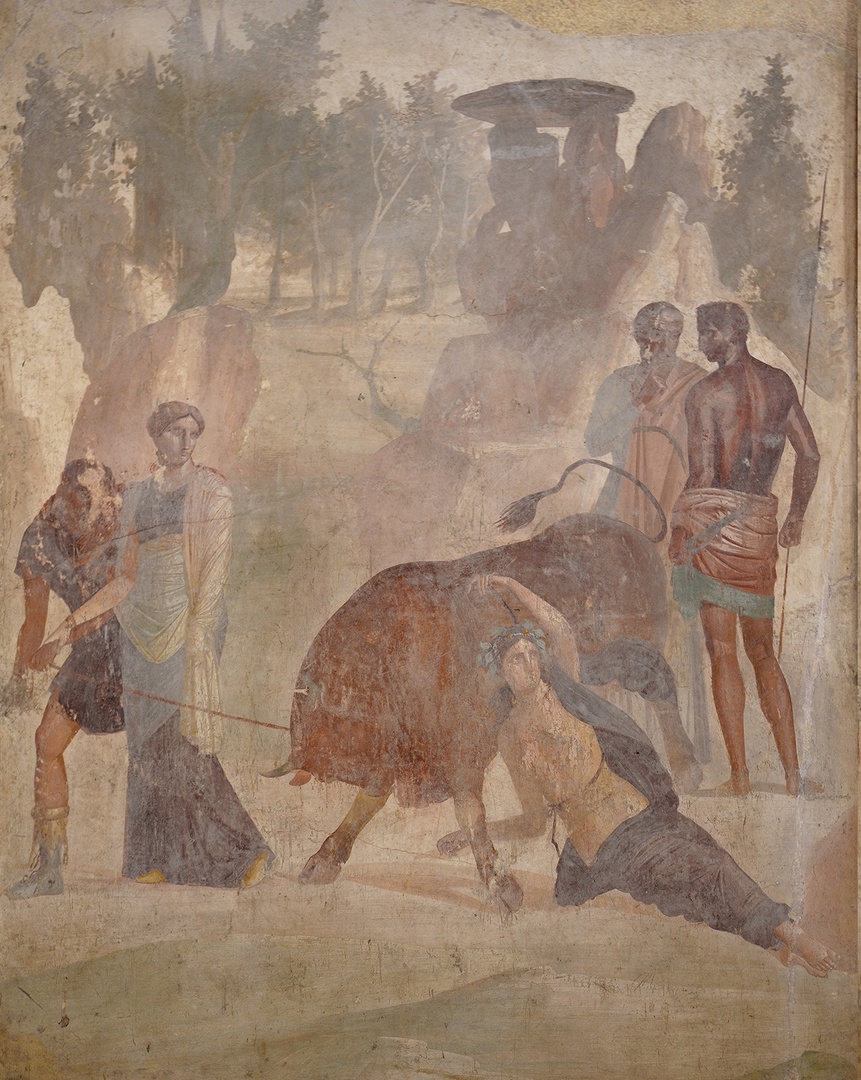 Of course, the rest of the world must have heard of these pygmies. And there are “Tales of the Pygmies”. They go back to Homer. Do you remember him, right? Odysseus, Trojan War, la-la-la. Yes, I read Homer.

This is from the Iliad:

Gathered together under the leadership of their leaders, the Trojans advanced with cries and noise, noise like birds, cranes in the sky, flying from the winter storm and endless rain, rushing to the streams of the Ocean, bringing the noise of death and destruction to the tribes of the pygmies, bringing evil and strife at dawn”.

So he compares the Trojan offensive to cranes attacking pygmies. What “yes. Weird.

This is probably the number one most famous Pygmy story, and clearly dates back to at least the Greek Dark Ages. Pygmies disguise themselves as rams, ride rams or goats.

They organize small military operations to attack the cranes, breaking their eggs and eating their chicks, presumably as a preemptive attack to protect themselves and their crops.

There is a whole realm of ancient research on pygmies and cranes. It seems that many tried to determine what was true and what was fiction. Aristotle wrote about the migration of cranes, and about the pygmies he said: 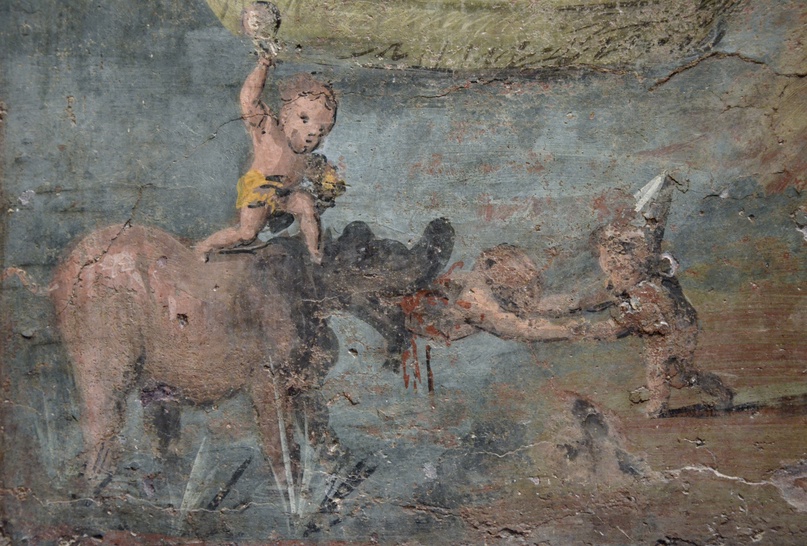 “… after all, they are not a myth, but there really is a species that is reportedly small – both people and their horses – and they spend their lives in caves.”

The Greek historian Herodotus called them “little people shorter than usual”. Even Pliny the Elder wrote in detail about the pygmies.

This could go on and on, but I think you get the point. Pygmies really existed, and there was also an ancient Greek myth about pygmies one and a half meters tall, fighting with cranes.

Alloy is the strongest known material on Earth, and gets even stronger in cold weather

Alloy is the strongest known material on Earth, and gets even stronger in cold weather