US, WASHINGTON (ORDO NEWS) — In July 2018, newspaper editorials were full of news of a sensational discovery: archaeologists unearthed an ancient Egyptian “funeral home” deep in the sands of Saqqara, an incredible burial site located on the banks of the Nile River about 30 kilometers south of Cairo.

Since then, for two years, archaeologists have conducted a thorough analysis of finds and new research in nearby dungeons filled with tombs, which gave a storehouse of information about the “afterlife” business in Ancient Egypt. For centuries, archeology in the land of the pharaohs has focused on the search for papyri with important inscriptions and artifacts in rich tombs.

Almost no attention was paid to the details of the daily life of the ancient Egyptians. Mummification rooms probably existed in ancient burial sites throughout Egypt. Many of them were overlooked by generations of archaeologists who focused solely on one goal: to get to the tombs as soon as possible.

The discoveries in Saqqara changed everything: for the first time, archaeological evidence of the extensive funeral industry in Ancient Egypt was excavated and documented in detail.

“The results of our research indicate that the embalmers were excellent businessmen,” said Ramadan Hussein, an Egyptologist at the University of Tübingen in Germany. “They did very smart when they offered customers alternative and more affordable options for leaving the other world.”

“Can’t you afford a luxurious funeral mask made of gold and silver? An alternative is white plaster and gold foil. Not enough money to perpetuate the internal organs in expensive cans of brilliant Egyptian gypsum? Then what about a painted clay pot? ” – says Hussein.

“We read about it in ancient writings,” he adds, “but now we are completely sure that in ancient Egypt there was a certain business on the bones.”

Hussein began working in Saqqara in 2016, looking for tombs hidden deep underground, which are more than two thousand years old. The nearby deep mines were largely ignored by Egyptologists who previously worked in the area. Those scholars were wholly focused on the burials of later periods of Egyptian history. The work of the Hussein team is shown in the new series of National Geographic , consisting of four series, called “The Kingdom of the Mummies.” In the US, the premiere will be held on May 12. While exploring the area, which was last explored at the end of the 19th century, Hussein and his team discovered a mine carved into rock. The mine was filled with sand, ruins and debris.

After archaeologists removed almost 42 tons of sand and stones, team members finally reached the very bottom of the mine, whose depth was 12 meters. Below, archaeologists discovered a spacious room with high ceilings, similar to a tomb. It was littered with a huge amount of sand and stone blocks that needed to be removed. Among the debris lay thousands of fragments of ceramics, each of which was carefully examined and preserved. Painstaking excavations took more than one month. 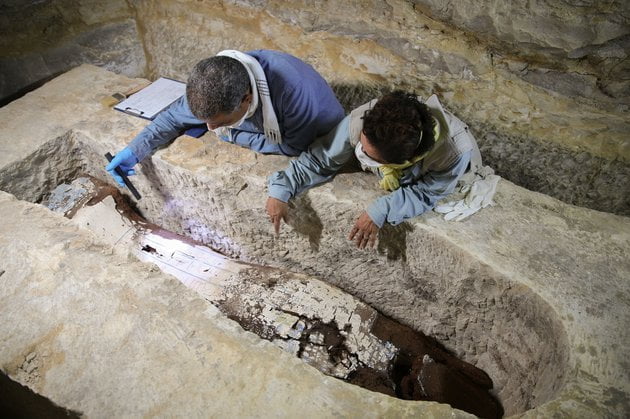 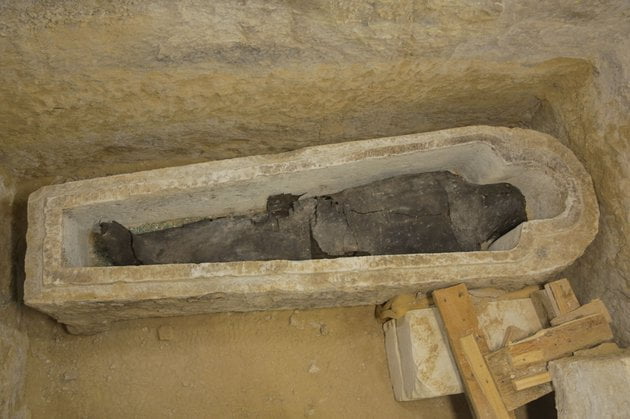 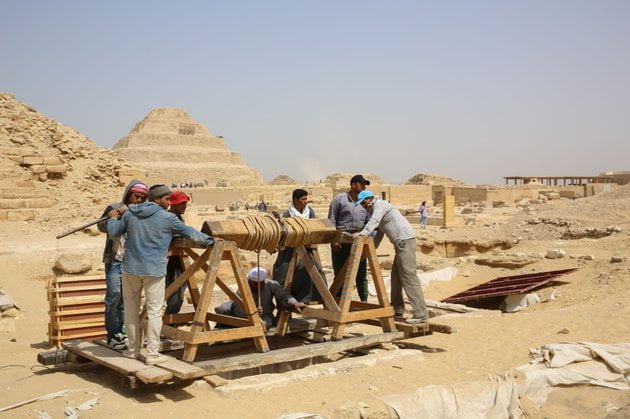 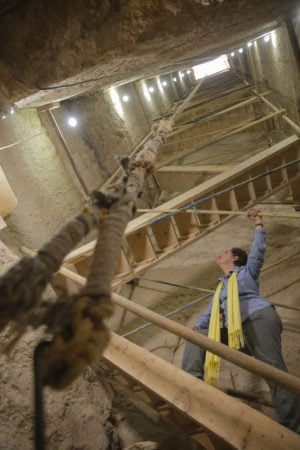 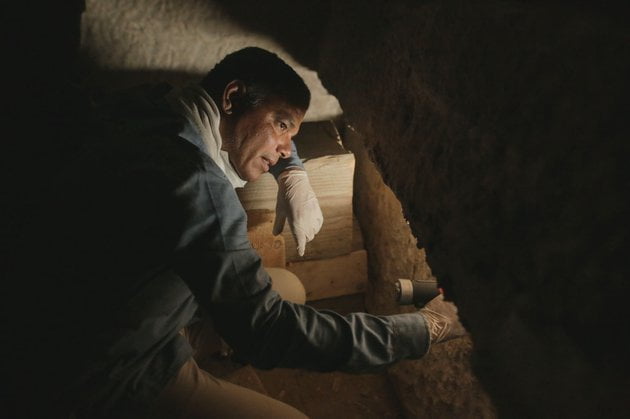 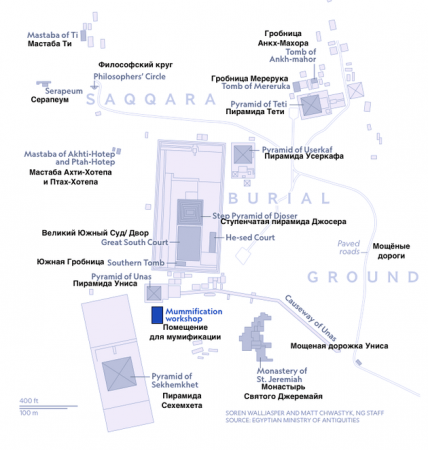 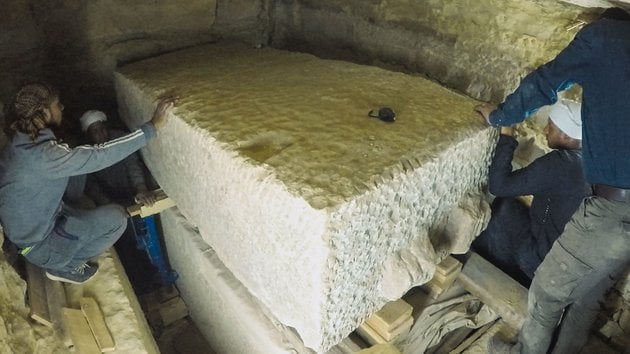 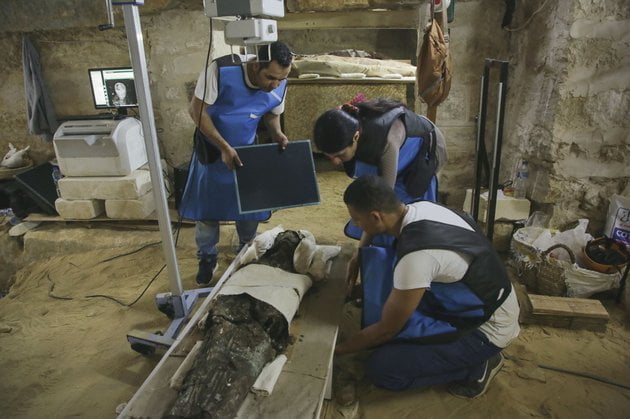 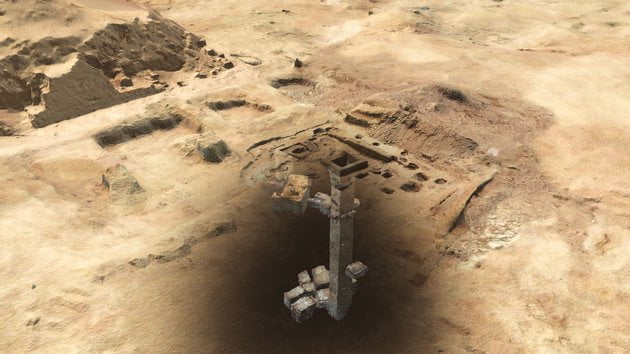 When archaeologists finally cleared the room of sand and other obstacles, the Hussein team discovered that this was not a tomb at all. This spacious room had a raised place, somewhat reminiscent of a table. In one corner stood a large bowl filled with coal, ash and dark sand. Also in the room noticed small holes and channels that were neatly carved into the rock along the base of one of the walls. An ancient tunnel, entering the system of underground passages under Saqqara, in which this mysterious room was located, passed cool air through these openings.

Hussein’s team suggested that this room was a mummification room, equipped with a large incense burner (incense burner), a drainage system for draining blood, and natural ventilation.

“If an autopsy was performed at this place and the subsequent stages of mummification, then, of course, fresh, cool air was needed there to avoid the reproduction of the common people. When it comes to opening the body, constant air circulation is critical, ”says Hussein.

Over the past few years, ceramics specialists have been able to put together ceramic shards, reconstructing hundreds of small jugs, each of which had an inscription with a certain label.

“On each of these vessels was the name of the substance that was stored in them, as well as the days of the embalming procedure when the substance was used,” says Hussein. “The instructions for use were written directly on these bowls and jugs.”

This discovery was a find for specialists studying ancient Egyptian funeral practices, revealing new details of sacred rituals and the harsh reality of mummification.

Ancient sources contain enough information describing the process of mummification. Some experts even found artistic images on the walls of Egyptian tombs, but even this did not help archaeologists to study this topic to the end.

“Too few such rooms have been excavated and described in history,” says Dietrich Raue, head of the Egyptian Museum of the University of Leipzig. “This is precisely what created the gap in our knowledge.”

“New discoveries in Saqqara help make up for unnoticed details and details. – says Hussein. “For the first time, we can talk about such a phenomenon as the archeology of embalming.”

For the ancient Egyptians, the embalming process was a combination of a sacred rite and a medical procedure. They believed that the body must remain imperishable so that the human soul could go to the afterlife. The embalming process was a carefully thought out and organized ritual with special rituals and prayers that were held for 70 days in a row. This time was enough for the human body to turn into a mummy.

At the beginning of the procedure, the embalmers removed the internal organs and placed them in special containers, which archaeologists call canopies (canopy is a ritual vessel, as a rule, an alabaster jug ​​with a lid in the shape of a human or animal head – approx. Ed.). After that, the body was dried using special salts, for example, sodium oxide. Then the body was coated with aromatic oils and wrapped in linen cloth. Charms, talismans and spells written on papyrus were hidden between the folds of fabric. Finally, the mummy was placed in the tomb, where there were all the necessary items for the afterlife.

The pyramids of the pharaohs towering in the vast desert and the tomb of Tutankhamun, almost entirely made of gold, are reliable evidence that the richest Egyptians sought to live luxury even in the afterlife. “It was a large and profitable industry,” said Hussein.

But the adventures of the mummy do not end with embalming and burial, bringing income to the embalmers. In addition to their main work, the ancient Egyptian priests traded real estate – places where the dead were to rest.

Eternal care for your money

While the pharaohs and the Egyptian elite were mummified and buried in artfully decorated sarcophagi and spacious tombs, to the top filled with funerary artifacts, Hussein’s studies show that the ancient Egyptian undertakers offered some kind of discounts to not so wealthy customers to please everyone. In business language, they were vertically integrated into the industry, providing customers with all stages from opening the body and its burial in the tomb to further care for the mummy and the maintenance of the soul of the deceased. All this, of course, was done for a fee.

Just a few steps from the mummification room in Saqqara, archaeologists discovered a second underground mine, leading to a complex of six tombs, where more than 50 mummies rested.

At the bottom of the mine, almost 30 meters deep, more expensive rooms were located, since they were closer to the underworld. Burials there were especially difficult, so such rituals were very expensive and were intended mainly for the Egyptian elite. Among the burials at such a depth, archaeologists found a woman who was resting in a limestone sarcophagus weighing about seven or eight tons. Nearby was another woman whose face was covered with a wooden mask coated with gold and silver. This was a rare find, since before these excavations in Egypt no similar masks were found for half a century.

However, the mummies of the middle and working class Egyptians were also in the same burial complex: they were buried in unremarkable wooden coffins or simply wrapped in linen cloth and placed in sand pits, which confused archaeologists.

Using 3D scanning, Hussein was able to recreate the overall picture of how the burial was arranged. His data confirm the papyrus documents found more than a hundred years ago in Saqqara. The documents said that enterprising priests-embalmers filled the burial rooms with mummies of Egyptians of the middle and working classes, after which they collected money or accepted land in exchange for spiritual maintenance and care for the mummy.

In the society of Ancient Egypt there was a whole class of priests who devoted their whole lives to caring and caring for the souls of the dead. The main duties of such priests are to keep the tombs and pray for the dead. Some of them owned dozens of tombs, each of which contained hundreds of mummies.

“People had to make donations to the dead weekly to save their souls,” said Cohen Donker Van Hel, an Egyptologist at Leiden University who has studied the contracts between priests and the families of the deceased for years. “Dead people are money.” That’s all”.

For the first time, archaeological evidence confirms something that until recently could only be guessed based on ancient writings and millennia-old papyrus documents. Such insights make excavations in Saqqara special. This is a big breakthrough in Egyptology – now researchers and scientists pay attention to the details of the life of ordinary Egyptians, and do not focus on some luxurious tombs.

“Ramadan is now receiving a huge layer of information that has been lost in the past,” says Dietrich Raue, head of the Egyptian Museum at the University of Leipzig. “These tombs were part of a developed infrastructure that disappeared from the face of the earth and left behind almost no documentation.”

This means that the future may contain even more such incredible discoveries if there are sufficiently purposeful and patient archaeologists who can cope with such a difficult task. Studying the old excavation reports in Saqqara, Hussein realized that the mine, which led straight to the mummification room, was located only a meter from the place where the French and Egyptian archaeologists stopped their searches in 1899. The mysterious room and its contents were completely hidden by sand, which they hastily raked to the side.