(ORDO NEWS) — A woman named Pixie Rose was working out at the gym and was stunned when she saw her own husband Caleb walking past her, who at that moment, she knew for sure, was at home with their young son!

When she realized that this man was not Caleb, her surprise was even greater, because he looked exactly like him. Same height, same face, same build, even with the same hair and beard.

She got into a conversation with this man and learned that his name was Andy. Later, she told Caleb about him and they decided to come to the gym together to get to know each other.

They also decide to bring their son with them to see if Caleb and Andy are really so similar that the child might confuse his father with Andy.

Pixie Rose shared this amazing story on her TikTok account and posted a video of Caleb walking into the room with the baby in her arms, where Andy greeted him. 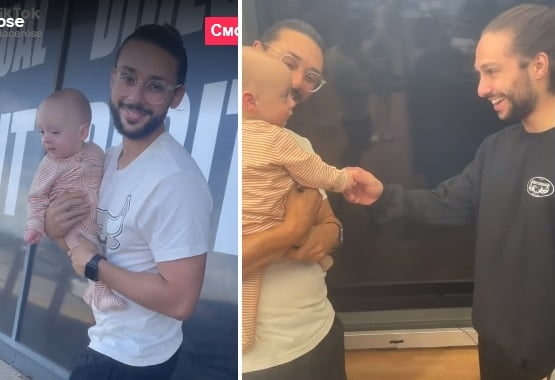 The kid in his father’s arms looks confused when he sees the same “father” in front of him, only without glasses. And when Andy took Caleb’s glasses and put them on, the boy was completely taken aback, opening his mouth.

“This is a complete double of my husband! It’s real madness to see them standing next to each other. No, they are not relatives at all!” Pixie Rose says.

The video aroused great interest in social networks and hundreds of people left comments on it, marveling at the incredible similarity between Caleb and Andy.

Some have suggested testing their DNA to see if they could be secretly separated twins, others have suggested that they may have had the same father who donated his sperm to a sperm bank. But Pixie Rose has not yet published anything about it.