(ORDO NEWS) — What astronomers thought was a black hole just 1,120 light-years from Earth turned out to be a very unexpected surprise: a system of two stars, where one literally sucks the life out of the other.

The suggestion that there could be a black hole in the star system was speculative from the very beginning, since it was based on a couple of unsupported assumptions.

When the cosmic object, known as HR 6819, was first identified in the 1980s, it was assumed to be a single, rapidly rotating body, the so-called Be star. However, decades later, it turned out that the star had a secret partner who was in close proximity to the star with a turnover every 40 days.

Two years ago, researchers at the European Southern Observatory argued that the Be star must wobble more than it actually does, hinting at additional invisible mass contributing to its weight.

Some believed that we were talking about an invisible black hole , and due to the anomalous proximity to our planet, this issue was worth studying in more detail, at least until such a hypothesis could be completely ruled out.

So the two groups of researchers joined forces to gather the necessary data and tip the scales in favor of one hypothesis over the other.

The key difference between the two scenarios was space. If there were three objects in space – an invisible black hole, a bright main sequence star, and a shining star Be – the distance separating the two luminous objects would be very large. But if there are only two stars in this section of space, then it is reduced several times.

Sure enough, the instruments on the VLT found that over a longer distance (about 100 milliseconds) there were no bright light sources. The VLTI instruments have confirmed that the stars are very close to each other, only 1 millisecond of arc.

In other words, this means that there is no black hole between them. These are just two ordinary stars in ordinary binary relations.

Note that “ordinary” in this case does not mean “boring”. We see this couple at a very specific stage, close to the stellar “retirement” – the moment when one partner sucked all the atmosphere out of his partner, like some kind of cosmic vampire.

As a result, the pair of stars is an ideal candidate for studying how such vampirism affects the evolution of massive stars and, in turn, the formation of related phenomena, including gravitational waves and powerful supernova explosions.

Black hole ‘lying on its side’ challenges current models

Black hole ‘lying on its side’ challenges current models 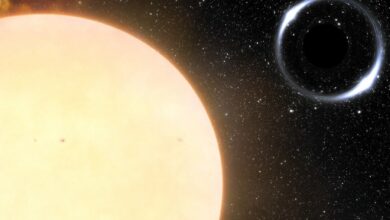