(ORDO NEWS) — You must have seen action movies where a bad guy threatens to destroy Earth. You may have heard on the news that global warming and deforestation of tropical forests lead us to the fast Armageddon.

Over the course of its life, the Earth has not seen anything, in addition it received more destructive blows from asteroids and other planets than you had hot dinners, however, it is still spinning. We selected the most apocalyptic scenarios, which, hypothetically, can turn any day into a day of judgment.

For this, any elementary particle accelerator is ideal, for example, the relativistic heavy ion collider RHIC. If anything, it’s located at Brookhaven National Laboratory, New York. At the installation, staples are studied, as well as the structure of nucleons and the quark-gluon plasma that occurs at the site of particle collision, and which existed in the Universe shortly after the Big Bang.

Theoretically, straps can reach macroscopic and even astronomical sizes and masses. The collision of the strapelka with the nucleus of an atom can cause it to turn into strange matter, which will be accompanied by the release of energy. As a result, new strapless will scatter in all directions, which theoretically will launch a chain reaction.

Explosion from the interaction of matter and antimatter

The main ingredient of this method is 2,500,000,000,000 tons of antimatter. Antimatter – the most explosive substance of all possible – can be manufactured in small quantities using any accelerator of large particles, but it takes patience and time to obtain the required quantities. Oh yes, and money. So much money. Antimatter is also known as the most expensive substance on Earth: NASA estimates that producing a milligram of positrons cost about $ 25 million.

There are two options. The first is absorption by a giant black hole. The closest to our planet is at a distance of 1,600 light-years from Earth in the direction of the constellation Sagittarius in the fourth among the known microquasars V4641.

After choosing the optimal black hole for this method of destruction, you need to send the Earth towards it, and it is better to move our planet and the black hole in the direction of each other. And this, perhaps, will be the most time-consuming part of the plan, because one light year is the distance that light travels per year – 10 trillion kilometers. The path is not close.

Option two – microscopic black holes. There is widespread paranoia that black holes absorbing planets can generate at the Large Hadron Collider. Nevertheless, even if CERN is capable of this, and even if these holes do not evaporate immediately from Hawking radiation, according to theory, they will be so tiny that one of them will take about 100 hours to absorb only one proton. At this speed, a life-eater will take much longer than the age of the universe to gobble up a milligram of matter.

Scientists say that the bombardment of the Earth by cosmic bodies about 3.9 billion years ago could create ideal conditions for life. In the same way, you can easily destroy our planet. This will require a very large asteroid or planet, which must be accelerated to a very high speed and crashed into the Earth.

Result: an impressive collision, which will lead to the fact that the Earth and, most likely, the shell itself will be broken into a huge number of fragments. The tougher the collision, the more energy will be released to overcome the mutual gravity of the particles, and they will forever fly into outer space, away from each other.

For an ideal impact when falling at a minimum impact velocity of 11 km / s (second space velocity) and with zero loss of energy for heating and other forms of energy, the projectile should have approximately 60% of the Earth’s mass. The closest to us Mars weighs about 11% of the mass of the Earth, Venus – 81%. In principle, both options are suitable, just Mars will have to accelerate much faster than 11 km / s. But these are the details. 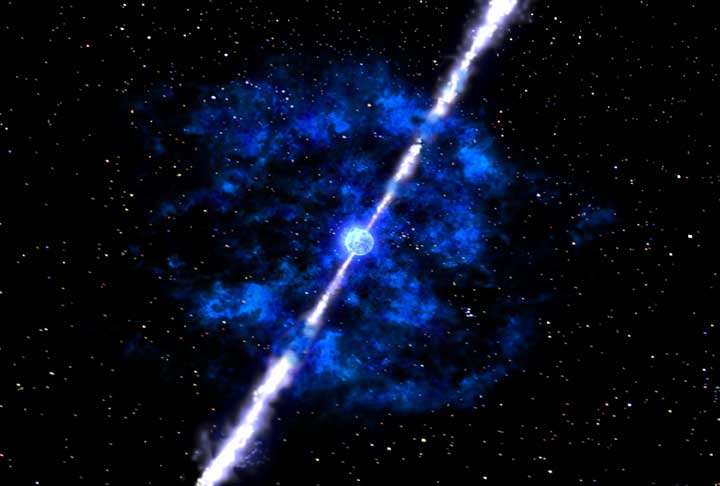 Large-scale cosmic emissions of explosive energy are currently the most striking electromagnetic events occurring in the Universe. They are capable of releasing as much energy in milliseconds as the sun generates over 10 billion years.

A fiery spinning wheel in space called WR 104 at a distance of about 8,000 light-years can trigger a gamma-ray burst in our direction, which can lead to mass extinction on Earth. Perhaps one of these gamma-ray bursts caused the Ordovician-Silurian extinction about 443 million years ago, when 60% of species of living creatures died.

Scientists discovered the text on the Dead Sea scrolls

Scientists discovered the text on the Dead Sea scrolls