(ORDO NEWS) — According to dozens of documents obtained by the US government, the now-defunct Advanced Aerospace Threat Identification Program (AATIP) has spent millions of dollars researching unusual experimental technologies, such as invisibility cloaks, anti-gravity devices, traversable wormholes, and tunneling through the moon with a nuclear bomb.

The documents, which include nearly 1,600 pages of reports, proposals, contracts, and meeting notes, reveal some of the strangest priorities of AATIP, the Department of Defense’s secret program.

The program operated from 2007 to 2012, but only became known to the public in 2017, when the former director of the program resigned from the Department of Defense.

That year, AATIP became synonymous with UFOs, thanks to several infamous videos of an unidentified aircraft moving in seemingly impossible ways that former director Luis Elizondo leaked to the press after his resignation.

However, new documents suggest that AATIP was not only investigating reports of UFO sightings, there were other equally interesting areas. The archive, consisting of 51 documents, was obtained under the Freedom of Information Act.

Perhaps the most intriguing among the classified documents are the several dozen Defense Intelligence Reference Documents (DIRDS) that discuss the viability of various “advanced technologies”.

Many of the reports highlight the impracticality of implementing advanced technologies. For example, in the DIRD report on invisibility cloaking, the authors (whose names have been redacted in all reports) write that “perfect cloaking devices are impossible because they require materials where the speed of light approaches infinity.”

However, cloaking devices that make objects invisible to microwave sensors such as radar and motion detectors are “definitely within the reach of current technology,” the report’s authors write.

Other reports don’t shy away from bold, sometimes bizarre proposals for cutting-edge technology. In a report on “negative mass motion,” the authors propose a plan to search for extremely light metals in the center of the moon, which could be “100,000 times lighter than steel, yet still have the strength of steel.”

To reach the center of the Moon, the authors proposed to blow up a tunnel through the lunar crust and mantle using thermonuclear explosives.

NASA’s upcoming Artemis missions plan to return humans to the moon for the first time since the Apollo era, with the goal of a permanent human presence. Bombing the moon with nuclear bombs would likely be inconsistent with this mission.

Whether these documents allowed for long-term investment in advanced technologies is unknown. According to Vice, much of the AATIP agenda relied on contract research from private company Bigelow Aerospace Advanced Space Studies (BAASS). 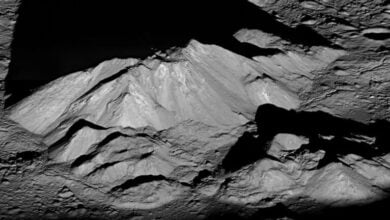